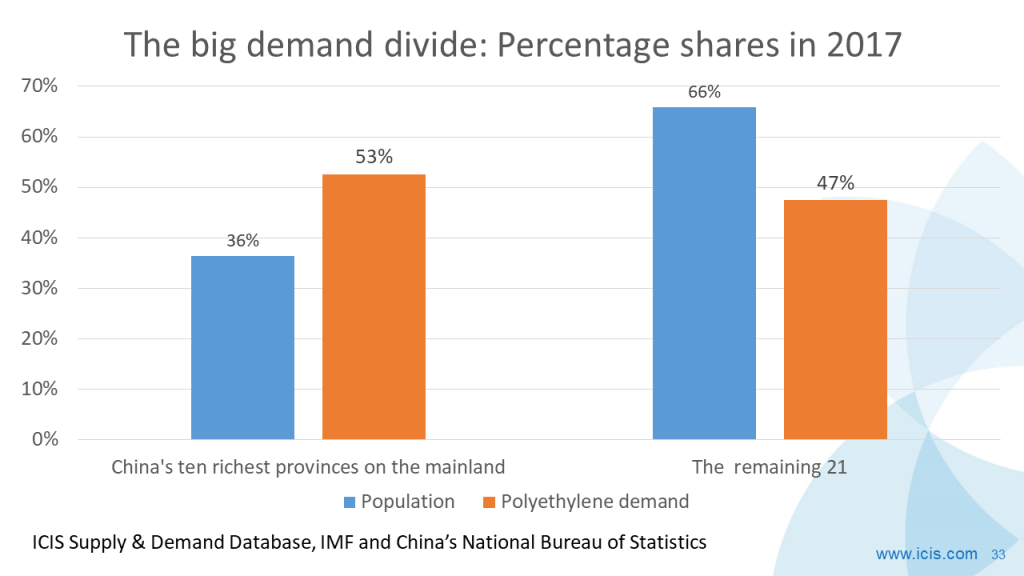 IF China played an insignificant role in global polyethylene (PE) demand the above chart would not matter. Few people would care about the latent potential of China’s 21 relatively poor mainland provinces if China were as unimportant as India and the Asia & Pacific region.

“Surely not? India and Asia & Pacific are booming,” might be your reaction because of all the distracting noise about the prospects for developing markets.

Our ICIS Supply & Demand Database blocks out the noise:

So let’s get serious. We simply must devote more resources to assessing demand by province in China because the potential upsides and downsides are so big. Every other country and region in the world, relative to China, requires less study.

The above chart shows that with just 36% of China’s mainland population of around 1.38bn in 2017, China’s ten richest provinces when measured by per capita incomes accounted for 53% of PE demand – 15.4m tonnes. Meanwhile, the remaining 21 provinces made up 66% of the population but only consumed 13.9m tonnes of demand –  the remaining 47 of the total.

(Note that for the purposes of this analysis I excluded Hong Kong, Macau and Taiwan. 2017 was the latest year for which per capita income data and population data by province were available, both of which were required to assess provincial consumption in tonnes).

On a per capita basis, PE demand in China’s rich coastal provinces is already very high – at Western or even higher levels. Further growth, percentage-wise, is thus going to be very limited. Historic data show that as economies reach developed status, petrochemicals demand in general tends to flatten out. And as Beijing, Shanghai and Guangdong etc. get ever-more richer, PE demand might even decline on what is perhaps a rich world luxury: Concerns over plastic pollution.

This leaves us with this big unanswered question: To what extent will growth in poor inland China compensate for moderating demand or even lost tonnes on the rich coast?

The population is ageing faster in poor China

The central and local governments are at risk of not being able to afford the new bridges, roads, railways and factories that are essential for narrowing the big income gap between rich and poor China. If these investments don’t happen income growth in poor but also very populous provinces such as Anhui and Henan will stall.

During the next 18 months heavily indebted provincial governments, especially in the poor provinces, will struggle to find the money for infrastructure projects and new factories because of VAT and other tax cuts. The cuts, designed to reverse the economic slowdown, will reduce the transfer of funds from the central government to the provincial authorities.

Longer term, unless China can escape its middle income trap, it will in effect go bust. It won’t have the tax revenue necessary to pay for the economic development of poor China. Soaring healthcare and pension costs – the result of the disastrous One Child Policy – will also restrict the ability to grow inland China.

The populations of China’s poor provinces are set to either decline or grow at lower rates than in rich China. That is unless China can take drastic action to reverse the disastrous effects of its One Child Policy, such as importing as many as 100m immigrants.

When the policy was introduced this was also when birth rates per mother were well above the population replacement rate of 2.1. Favourable demographics and economic reforms led to the migration of hundreds of millions of young people from the inland provinces to the coastal provinces to work in export-focused factories.

Because of the biggest internal migration in history, and because of the collapse of birth rates caused by the One Child Policy, inland rural areas are ageing faster than the urban coast: In 2040, a third of the total rural population will be 65 or over, double the ratio for urban China.

Plastic pollution may not be just a rich world issue, especially in China where central government policies could result in major growth in recycling in the inland provinces. This would generate some of the local jobs necessary to boost growth as recycling is a local-for-local business, due to the high costs of transporting plastic waste.

We don’t know the answer to any of these variables. Nobody knows because the research hasn’t been done. But ICIS plans to do the research.