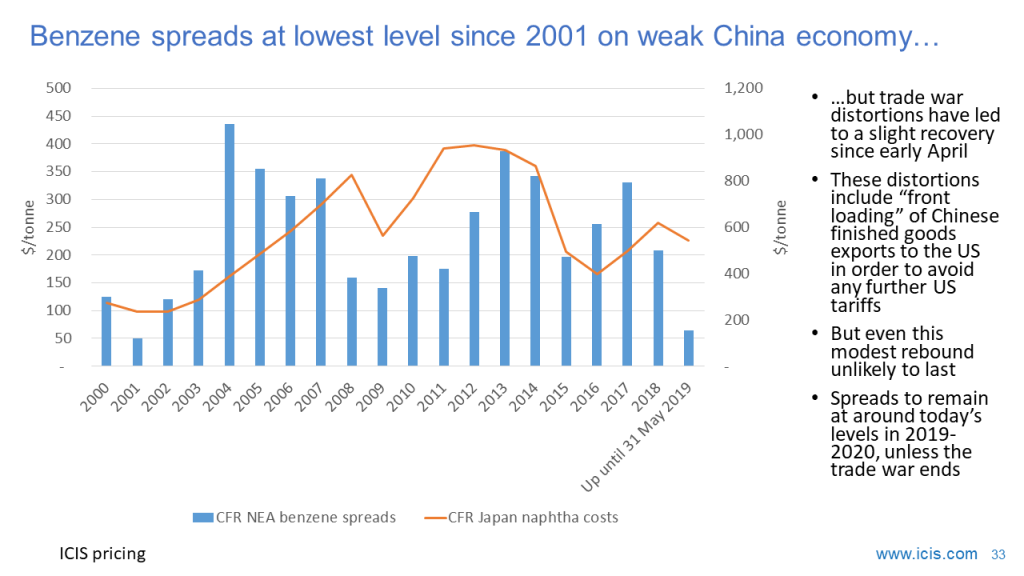 NOBODY should be surprised by the BASF results for Q1 2019 where, on a year-on-year basis, EBIT was down by 71%. This was largely because of events in China.

The roots of these very poor results, with many more likely to follow from other chemicals companies, can be traced back to H1 2018. It was then when the ICIS Asian Chemicals Connection blog first identified the slowdown in the Chinese economy due to a sharp reduction in credit growth. With China responsible for more than a third of global demand across most chemicals and polymers, it was clear that reduced lending would have major worldwide implications.

Most mainstream analysts argued that China would soon ease back on its lending restrictions. We said the opposite because of our belief that the Chinese government was determined to tackle excessive bad debts. China, we contended, had also gone beyond the point of no return where each Yuan of new debt was delivering such low benefits to GDP that the debt-fuelled growth model of 2009-2017 was no longer viable. This has proved correct with real lending conditions, when repayments of debt are taken into account, remaining tight in H1 of this year.

We predicted as early as January 2017 that the trade war could only get worse because of a long term bipartisan shift in the US view on China. Republicans and Democrats were united in a new belief that China was an adversary rather than a partner on not only trade issues, but also in the areas of technology and geopolitics, we said. This of course has happened, acting as a further drag on the Chinese economy and the BASF Q2 results.

BASF highlighted the 13% fall in China auto sales in H1 2019, again on a year-on-year basis, as a major factor behind their poor financial performance. We were pretty much alone in March this year of predicting no recovery in the China autos market after the 2018 fall in sales – the first annual decline in sales since the early 1990s. Our argument was that as lending remained tight, affordability would drive a big rise in second-hand car sales. We also said that the rapid ageing of China’s population would be another critical factor behind slower sales of new cars and a slower economy in general. Most analysts now see at best flat new-car sales growth in 2019.

Very simple measures of the strength of chemicals markets, which we have been providing on a regular basis since early 2018, provided a further pointer towards the BASF results. Take as an example the above chart which shows CFR China benzene pricing spreads over CFR Japan naphtha costs. As you can see, up until the end of May, spreads were at their lowest level since 2001. Benzene is of course a key building block chemical with many uses downstream into the derivatives produced by BASF and other chemicals companies.

What happens next? I believe the global chemicals industry is at risk of a significant downturn, if not a recession. Contact ICIS, your essential data and analytics supplier, to track what this means your company.

Multiple trade disputes and the risks for the US PE industry

By John Richardson FALLING out with a trading partner as big as China is problem...

We will return on 29 July