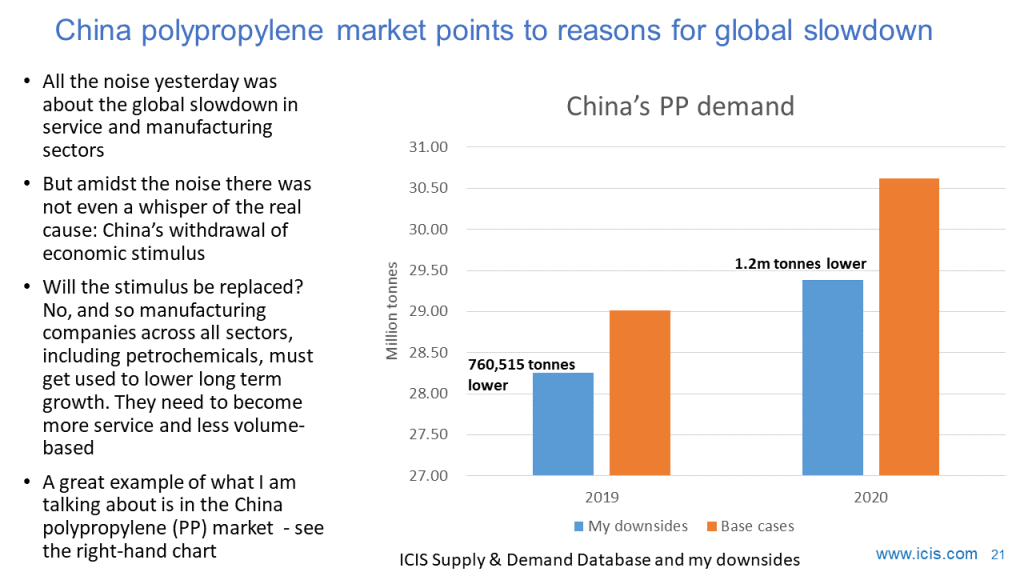 THEY SADLY still don’t get it. All the clamour yesterday was about declining services and manufacturing growth in the West, with stock markets down until late-in-the-day rallies, probably because investors figured that the Fed will cut interest rates for a third time since the financial crisis later this month.

But for the global manufacturing sector the Fed and the ECB etc. returning to renewed stimulus wouldn’t make that much of a difference; neither would a temporary trade truce between the US and China after they hold talks later this month (and remember, it can only be temporary as both sides are caught in the Thucydides Trap. We are heading towards a bipolar world, and, in all probability, a US and China war).

The only thing that would turn the manufacturing sector around – and of course petrochemicals are part of the manufacturing  sector just in case you’ve forgotten because you are too busy looking at the value of share options – is China returning to massive renewed stimulus.

Let’s get back to basics for those who haven’t been listening. Chinese polypropylene (PP) demand rose by a very healthy 6.5m tonnes in the ten years between 1999 and 2008. This was very strong and sustainable growth for a rapidly emerging economy. But over the following decade – 2009 until 2018 – consumption rose by a staggering 14.4m tonnes. This was due to the huge economic stimulus programme China introduced following the Global Financial Crisis.

It is exactly the same story in most of the other petrochemicals and polymers. What’s also the case across most products is that the years 2008 and 2009 marked major tipping points as economic stimulus kicked in. It was during those years that China became the world’s single biggest consumer amongst all the countries and regions by volume.

So, will China return to huge economic stimulus? In my view no because the years between 2009 and 2017 were an aberration in terms of China’s usual economic planning. “Needs must”, the potential systemic disaster for China of the Global Financial Crisis, forced it to bet the farm on stimulus that it knew would create major debt problems. During and since Deng Xiaoping’s governments, China has planned many decades ahead.

And now Xi Jinping has abolished term limits on his tenure as president and is in a strong political position. He can thus return to the long term historical trend of economic planning and knows that:

China won’t panic. It will continue to tinker around the edges and so expect more moderate economic stimulus programmes, but there will no flood of new stimulus on the scale of 2009-2017. Tinkering will remain the approach even in the event of the trade war continuing.

Oil and gas producers, petrochemicals producers, auto makers and luxury goods manufacturers and so on will have to come to terms with this reality.

In the immediate term, China’s slowdown could be the trigger for a global recession. Even if it isn’t, a great deal of petrochemicals and other manufacturing capacity will be left behind around the world that has been built to serve Chinese growth that will simply not happen. China will continue to grow – I don’t see it collapsing. But growth will be much more moderate.

Sticking with PP, which is the subject of the above chart, the latest ICIS data confirms this trend. Apparent demand growth, which is local production plus net imports year-on—year in January-August 2019 was 4.7% – a percentage point below our forecast of 5.7% for the full year. Assume that this trend carries on for the rest of 2019 and this would leave demand at 28.3m tonnes – 760,515 tonnes less than our forecast.

We forecast that PP demand growth will remain at a very robust 5.5% in 2020. I don’t see this. For me, 4% feels more realistic. This would leave 2020 demand 1.2.m tonnes less than our base case, assuming I am right about this year’s level of consumption.

The canary in the coalmine for the stimulus withdrawal-induced economic slowdown is the China auto market where annual average new car sales growth is set to collapse to minus 2.8m tonnes in 2018-2019. This would compare with annual average sales growth of 2.1m of new vehicles during the peak stimulus period of 2009-2017.

This will of course hurt PP demand growth over the long term as the China autos sector, along with all of its other durable consumer goods sectors, sees much lower-than-expected growth over the next decade. Our base case sees Chinese PP consumption growth at 14m tonnes in the ten years between 2019 and 2028. Expect somewhere around half this level with major downside implications for global growth.

This doesn’t have to be doom and gloom. It instead can be a case of petrochemicals companies getting used to lower Chinese growth and thus lower global growth than they had expected. Companies need to rationalise capacity expansion plans and become much more service based. That way they can meet the needs of a maturing Chinese economy and still make great money. I will talk about this theme in later posts.

By John Richardson CHINA is heading for another good year of PE demand growth wi...

By John Richardson ANYONE who has anything to do with the petrochemicals industr...

By John Richardson OFFERING clear guidance to petrochemicals investors and other stakeholders remain...

By John Richardson WE MUST BE careful here. If 2020 taught is anything, it is that China has the cap...

By John Richardson WE WILL CONTINUE to stumble around in the dark unless we gain a much better under...

Global supply chain disruptions may maintain, or even add to, regional petchem imbalances

By John Richardson THE GLOBAL petrochemicals business looks set to remain largely in the dark about ...