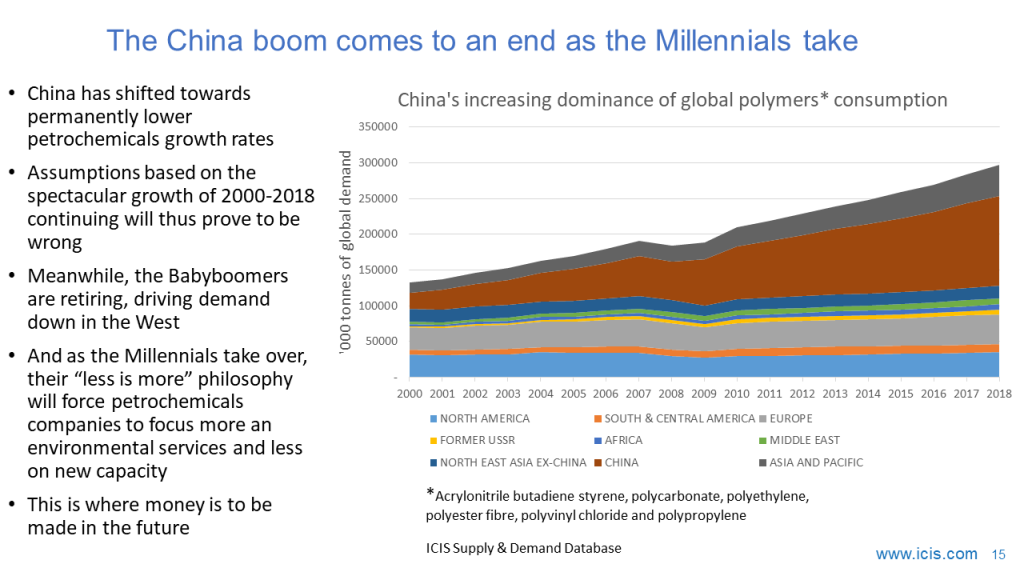 ANYONE who has anything to do with the petrochemicals industry or anything to do with the global economy, in other words all of us, needs to pay close attention to the above chart and what it is telling us. This once again demonstrates the enormous value of the ICIS Supply & Demand Database and how it informs us about our business and the world in general.

The chart encapsulates the extent to which the petrochemicals industry has become a “one trick pony”, a business where nearly all the logic of world-scale new investments outside China is so heavily skewed towards what happens in China. It is the assumed continued large scale of China deficits in a raft of key petrochemicals that’s driving spending on new cracker and reformer complexes.

Further, what has happened in petrochemicals reflects events in the global economy during the last 18 years. Last week marked the 70th anniversary of Communist rule in China. It was time to take stock of startling macro statistics, such as how China’s economy has gone from being $1.3 trillion in size in 2000 to $13.6 trillion in 2018. Staggering growth.

Now let’s look at this in term of tonnes in order to add a little icing onto the statistical cake. In 2000, China consumed 23m tonnes. By last year, this has risen to 126m tonnes. Meanwhile, Asia & Pacific saw demand rise from 14m tonnes to 44m tonnes. China has a population of “just” 1.4bn versus Asia & Pacific’s some 3bn.

The end of an era

This extraordinary and unique period of history needs to be divided into two phases.

Phase 1, between 2000 and 2008, saw a confluence of favourable demographics. In China, there were lots of young people willing to work for low wages. In the West, many of the super-rich Babyboomers were enjoying their years of maximum disposable incomes.

The young people made the cheap goods, made from petrochemicals, which were exported to the West in record-high volumes as the Babyboomers spent like crazy. Their spending was further fuelled by the sub-prime bubble.

Then came Phase 2, China’s post-2008 global economic rescue act which was sub-prime on steroids. China was responsible for around 50% of total global economic stimulus in 2009-2017. Between those years, it accounted for 68% of the growth in the six resins.

The first phase of 2000-2008 cannot be repeated because China’s population is rapidly ageing, undermining its role as the low-cost workshop of the world. The Babyboomers are retiring and selfishly the Boomers, including myself, haven’t had enough kids to maintain previous stellar levels of demand.

The great Chinese credit boom came to an end in January 2018 and there is no turning back. A return to levels of stimulus during the peak years is impossible for debt and environmental reasons. China’s petrochemicals growth will thus moderate, taking away many millions of tonnes of assumed new demand.

The Millennial attitudes are also taking over. “Less is more” and “experiences over things” are the driving philosophies that look back on previous generations as wasteful and irresponsible. The momentum created by people like Greta Thunberg will grow and grow.

She has a right to be angry at the environmental mess we older people have left behind. I am angry at myself that I wasn’t aware of the mess I was creating whilst I was busy creating my own particular pile of mess. Ignorance is no defence.

An ageing Western population and the mind set of the Millennials mean that no other developing country or region can export cheap stuff to the developed world in the same volumes as China did during its manufacturing-led economic heyday. India, for example, cannot export its way to more equitable and much-greater wealth in the way that China has done.

As delegates take part in this year’s European Petrochemical Industry Association Annual Meeting in Berlin, the event will be an important litmus test as to whether or not the penny has dropped.

The opportunities for our industry remain enormous but this is no longer a game of more and more volume. The industry must instead adopt the Millennials’ “less is more” approach.

For example, ABS and PP producers need to work with the washing machine manufacturers to make machines which last longer and are easier to repair. This will be the perfect response to growing environmental pressures.  Machines that last longer must also be cheap, thereby unlocking more growth in the developing world.

PE producers need to also work with the fast-moving consumer goods companies to design single-use packaging that can be recycled.

I heard a great example last week of a PE company that had designed a flexible pouch with a brand owner which uses only linear-low density PE and not aluminium and polyethylene terephthalate resins as well. Multi-layer packaging made from different materials is impossible to recycle.

In the clothing space, the old throwaway society is also disappearing. The polyester fibre producers must work with the brand owners to make clothing which lasts long enough to be repeatedly rented out in new clothing-rental markets.

Petrochemical companies need to be customer-facing in ways that they have never been before. Our industry has been a hidden industry because we are sandwiched between oil and gas and finished-goods manufacturing.

Most consumers have no idea what we do, or sometimes even that we exist at all. This has led to us to spend too little time engaging with consumers. This cannot continue otherwise petrochemicals companies will lose their licenses to produce as environmental legislation builds.

There is an opportunity here as well as challenge. Think of a mono-material plastic pouch which includes the logo: “Made from 100% recyclable plastics produced by (insert your company name here) and certified by the Ellen MacArthur Foundation”. Imagine the boost to your sales and your share price.

If you are an old hydrocarbons man like me, you might be tempted to say “idealistic nonsense”. No, it’s just the way things are.

By John Richardson THEY SADLY still don’t get it. All the clamour yesterda...

As always, this blog post expresses my own personal views and these are not the ...