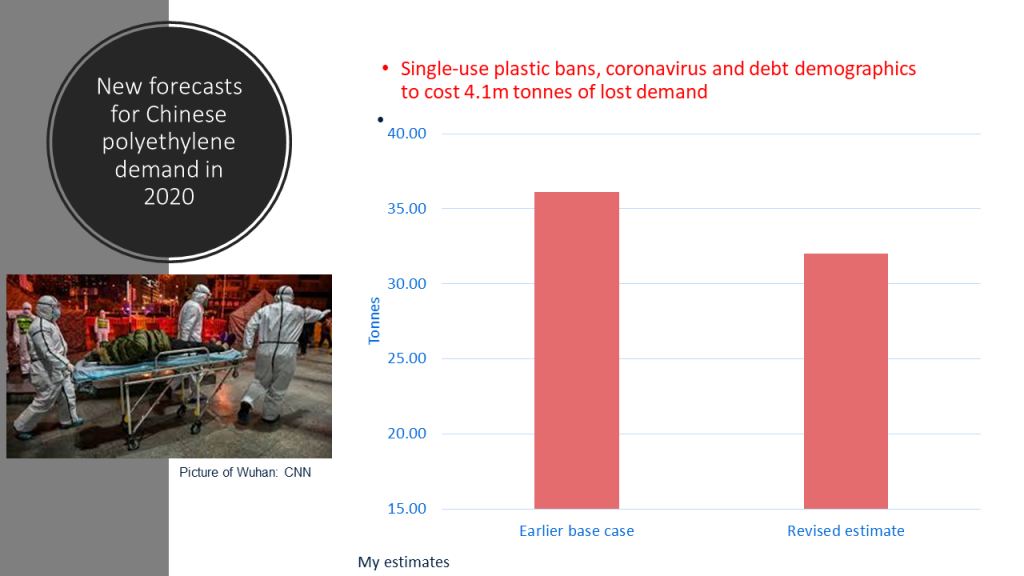 CHINA was supposed to be the one polyethylene (PE) market we could all depend on during a period of unprecedented oversupply. This is no longer the case.

As I discussed last week, 2019 could well have been another stellar year for the country’s demand growth with consumption of PE at some 33.9m tonnes – 800,000 tonnes more than we expected, based on my preliminary estimates. This would mark the second year in a row that we had underestimated growth.

But Asian ethylene and PE margins were  still in deep negative territory towards the end of last year, reflecting the extent of the oversupply.

Now we face three threats to 2020 growth, one which we all hope is short term and another two deep and structural and thus longer-term

Firstly, there is the coronavirus outbreak which  has already claimed 56 lives. There will be a significant effect on economic growth.

Last year, China’s official GDP growth was the lowest in 29 years. That’s if you unwisely believe the official number. Growth was likely lower than the officially reported 6.1%. The economic slowdown is the result of debt and demographic factors that are far greater in scale and importance than the peripheral and over-hyped trade war.

A strong China is essential

China’s ageing population is likely to be a problem that China will find impossible to fix. The only solution is to therefore become a country of much higher value manufacturing and services in order to compensate for a shrinking working-age population and rising labour costs. I think China has a great chance of doing this, provided it can win its technology and geopolitical battles with the US.

This is evident from the data on the dominant role that China has to come to play in global consumption across all the petrochemicals products – with petrochemicals, because they are such important raw materials for many manufacturing chains, providing a good proxy for overall economic growth. In PE, as recently as 2000, China accounted for just 12% of global demand. Last year, this had risen to 31%. In 2009, China overtook North America in PE to become the world’s biggest consumer by volume.

China’s pretty much existential struggle with its demographic problem links to the third big issue – its announcement last week – as I have been predicting would happen since April 2019 – of major bans and restrictions on the consumption of single-use plastics.

Why there is a link is that China can ill afford the continued negative effect on its economy of environmental degradation caused by plastic and other pollution during a period when it is also having to contend with demographic challenges.

Plastic and other industrial pollution, along with climate changes, explain why China is rapidly running short of potable water.

The United Nations estimates that eight of China’s northern provinces are in the category of “absolute water scarcity” where availability of drinking water has fallen below 500 cubic metres per person per year. A further 11 of the country’s provinces, home to many more hundreds of millions of people, are experiencing water availability of less than a 1000 cubic metres per annum, which the UN defines as water scarcity.

The contamination of China’s rivers by completely unnecessary plastic pollution is quite literally off the charts. And there is an international dimension to this, and thus an opportunity for China to win international Kudos by dealing with its plastic rubbish crisis:

By dealing with its plastics rubbish challenge, China can also help compensate for its ageing population by creating a high value, state-of-the-art recycling industry. I believe that China will pour hundreds of millions, if not billions, of government money into this industry – and has a good chance of ending up as an exporter of sophisticated recycling technologies and services.

Thanks to some excellent work from my colleagues in China, it is now possible to be a little more precise – following my initial attempt at number crunching last week – over the impact of the single-use plastics regulations on PE demand in 2020.

My colleagues (click here for a free version of the article) looked at each of the regulations and conclude that, based on their estimate of 2019 demand, the new rules amount to 3.11m tonnes of last year’s consumption – or 9.4% of demand.

But, as I said, demand was probably higher than our base case last year. This would mean the restrictions likely amounted to 3.9m tonnes of 2019 demand. Role this on a percentage basis forward into 2020, add in my guesstimates of the impact of the coronavirus outbreak and debt and demographics on growth – and this year’s demand falls to around 32m tonnes. This is some 4.1m tonnes lower than my “business as usual” base case.

What happens after 2020 is at this stage devilishly hard to quantify. But what’s clear is that all the existing estimates out there will need to be revised downwards, with major implications for the global PE business.

The good news will arrive when we stop obsessing about these types of numbers. Right now, we simply have to constantly re-crunch the data because of the way the business operates. We are hooked on growth for growth’s sake – this is the basis of our entire investment model. We gauge new demand by volume and build quantities of new virgin capacity on this basis, regardless of the environmental and societal impact.

But this approach will very soon no longer be possible. Investments will have to be based on their positive environmental impact. The industry will have no choice, because, as China has demonstrated, that’s the way the legislation is moving.

Those who in the future focus on the value rather than the volume of investments will be the ones who make the money.

PREVIOUS POST China single-use plastic bans: Polyethylene imports 68m tonnes lower in 2020-2030
NEXT POST Why coronavirus will be a much bigger deal for petrochemicals than SARS