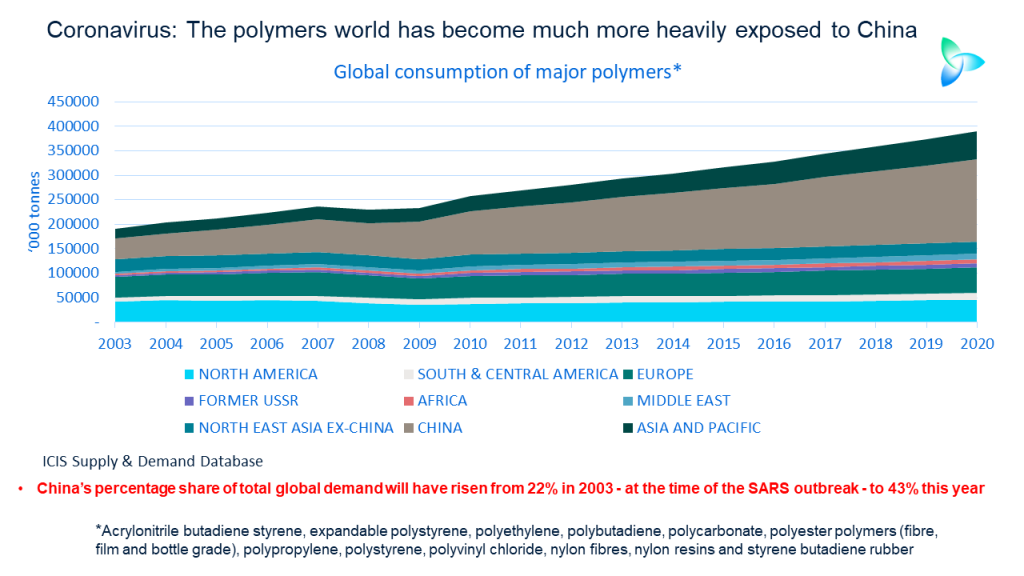 THE WORLD was very different in 2003 when SARS struck. Back then, China accounted for just 4% of the global economy but last year this had risen to 17%.

The US was also the biggest source of global economic growth 17 years ago. China has since overtaken the US to become the main source of global growth, with its contribution to the expansion to world’s economy now nearly three times that of the US.

It is thus obvious that the $33bn cost to the global economy of the SARS outbreak will be many times exceeded by the effects of the coronavirus outbreak, even assuming that this latest global health scare is quickly brought under control.

But it will not just be the headline cost of $33bn that will many times exceeded. More importantly, the effects of the economic loss will be much more keenly felt because China is a far more important source of total global economic growth than it was in 2003.

What applies to macroeconomics also applies to petrochemicals and polymers as the outputs of our industry are the raw materials for so many manufacturing chains.

When financial analysts and economists talk about the rise of Chinese consumption, they usually only refer to oil, copper and other well-understood commodities (for example, in 2002, China accounted for some 18% of global consumption rising to 53% in 2019, according to BCA Research).

But just as good if not better a gauge of the potential impact of the coronavirus crisis are ICIS data on China’s role in driving global polymers consumption.

Positives and negatives for polymers demand

The basket of polymers I have chosen for the above chart go into everything from cheap disposable single-use plastics, a big source of demand for polyethylene, all the way up the retail cost chain to resins such as polypropylene (PP), polycarbonate (PC) and nylon that go into expensive consumer durables such as autos and electronics.

Lumping them all together in this way is only a first level of analysis in order to indicate total exposure of the global petrochemicals industry to China.

We can seek from this chart is that China is expected to account for 43% of total global consumption of all these commodities in 2020, up from just 22% in 2003.

It is also worth noting that in 2003 over the previous year, China accounted for 48% of the total global growth in all these polymers. In 2020 compared with 2019, we forecast this will have increased to 54%.

It is not necessarily the case that all the resins will see weaker growth than we had expected in 2020. Some might even benefit from greater demand for face masks and other medical equipment.

And as The Economist points out, “The [Chinese] economy is running on home delivery of food and goods” because of travel bans on some 56m people.

This will support PE and expandable polystyrene packaging demand for home deliveries, that is until the government has the time and space to implement major new restrictions on single-use plastics.

But there are negatives for the consumption of polymers in autos as Wuhan, which is the epicentre of the outbreak, is a major hub for automotive production.

The extension of the Lunar New Year Holidays to 9 February in the key manufacturing hubs of Shanghai, Jiangsu, Zhejiang and Chongqing will also weaken demand for polymers in general that go into finished goods.

The question on the exam paper then becomes whether or not this will only amount to a huge seasonal distortion in polymers demand.

Could it be that every tonne of lost consumption in Q1 is regained in the second quarter as the economy kicks back into gear, thanks no doubt to government economic stimulus?

This can only happen if the virus is quickly brought under control. Right, now, of course, nobody has a clue about whether this is achievable.

As far as the latest overall GDP growth projections are concerned, several economists seem to believe that the lost growth momentum from the coronavirus outbreak cannot be entirely recovered.

For example, Oxford Economics is now forecasting Chinese GDP growth at 5.6% for the full-year 2020 versus its earlier prediction of 6%. It sees global growth at just 2.3% in 2020, which would be the lowest rate of increase since the Global Financial Crisis.

US GDP growth slowed to 2.3% in 2019, the slowest expansion in three years. The outbreak could drag growth lower as sales of goods and services in China take a hit.

Starbucks has closed nearly half of its outlets in China, Disney and Tesla have suspended operations and US airlines have stopped flights to China.

President Trump will very likely have to forget one of his big Phase One trade deal “victories” – China’s pledge to buy $200bn worth of US commodities, finished goods and services over the next two years compared with the level of its purchases in 2017.

This was a very difficult target from the outset given China’s current level of purchases in commodities such as nuts. China would have to this year raise its purchases of a US nuts to a value of no less than $2.5.bn from its previous record-high of $390m in 2012 in order to meet the overall target.

The $200bn target  now seems impossible because of the virus-related slowdown in the Chinese economy.

Mr Trump might find himself under pressure from US farmers and manufacturers as he hits the re-election trail. How might he react? Consider the possibility of him losing his famous temper and the trade war accelerating again.

At the very least, there will be no major support to farm and manufacturing incomes, and thus US GDP, from Chinese commodities purchases in 2020.

Other commodity exporters such as Australia and Brazil will likely be badly affected, with countries such as South Korea and Vietnam also damaged through disruptions in Chinese-dominated manufacturing supply chains. Also expect countries such as Thailand to suffer from a big drop in Chinese tourism.

This just scratches this surface. There are many more ramifications to consider including the disruption to petrochemicals supply chains as a result of Chinese petrochemical plant shutdowns.

One example is in polyethylene terephthalate, where buyers of Chinese resins have had to seek alternative suppliers in Southeast and the Middle East.

I will keep you up to date on events as best I can, as this week I am travelling in Saudi Arabia.