We all hope that the coronavirus outbreak will soon be brought under control, that’s the main thing, and my sympathies and concerns go out to my good friends and everyone else in China. It also important to also think, as a secondary and less important issue, of the business risks, and I hope my latest updates below help you plan. These are just my views and not, as always, the views of ICIS. Thank you, and please take care. 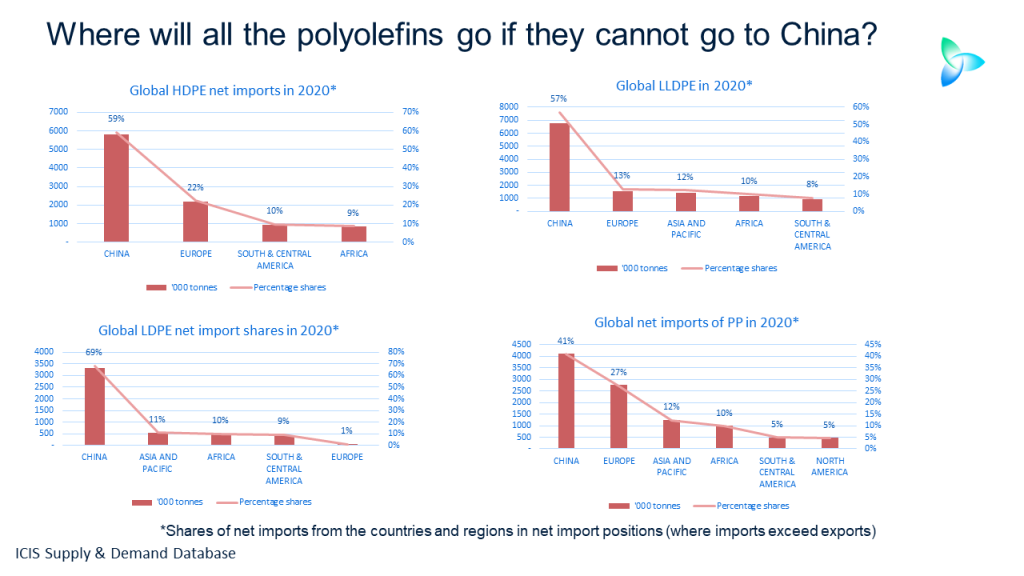 WHERE WILL all the polyethylene (PE) and polypropylene (PP) go? That’s the question raised by the above chart which once again demonstrates the extreme over-reliance of the petrochemicals industry on China.

The chart reveals some remarkable numbers from our ICIS Supply & Demand estimates for 2020 of the shares of imports amongst all the countries (that’s just China as a country) and regions in the world in net import positions – i.e. those countries and regions were imports exceed exports.

Obviously, these numbers don’t include those places in net export positions that still import. But the above chart is still an excellent guide to the dominant players in global import markets. And how China dominates:

It is the same story in mono-ethylene glycols, styrene and paraxylene as I shall detail later on. China is by far the most important market for the whole of the petrochemicals business and now that the economic effects of the coronavirus outbreak are accelerating, major global production cutbacks could be inevitable.

Don’t be misled into thinking that the cutbacks that have already taken place at petrochemicals plants in China, and they have likely been extensive, will rebalance global markets as these cutbacks have been overwhelmed by the loss of demand.

A clear pointer to the severity of the demand downturn is that Sinopec has cut its refinery throughput by 12% for February, or 600,000 barrels per day, the biggest reduction in more than a decade.

This run cut doesn’t just reflect possible delays to unloading of oil cargoes because of a shortage of customs officers at ports. Some media reports suggest there are other delays, whilst others say the handling of crude imports remains fine.

This instead appears to be about a collapse in demand for transportation fuels as some 56m people are in lockdown, unable to leave their homes, with many more millions too cautious and sensible to do anything but stay at home.

The cutbacks by Sinopec, and surely other refiners as well, has of course substantially reduced the availability of petrochemicals feedstock – one of the reasons why I hear reports of sharply lower operating rates at steam crackers and derivatives plants.

But even if they were getting the feedstock in the usual volumes, the feedstock procurement managers at the Chinese cracker complexes would have to say, “No, we don’t want it” because their downstream customers are not operating due to shortages of labour – and because, as I said, there is much reduced consumer demand for plastic goods anyway.

It is not just the many millions of people who are being forced to stay at home, or who are voluntarily staying at home, that’s the problem for demand.

Another issue is that the outbreak happened just before the peak Lunar New Year consumption season. As a result of all the travel restrictions and the major dent to consumer sentiment, holiday spending will this year be way lower than normal.

Please also note there are also reports of delays to container shipping to China – and container ships of course carry polyolefins – because of the virus. But demand is, as I said, is the much bigger factor here.

A further problem for demand is the loss of manufacturing and services activity. As mentioned above, many plastic processors will be shut down. So are numerous auto and other plants in China’s manufacturing heartlands. Wuhan, the epicentre of the outbreak, is a major autos and textiles hub.

I am afraid I was wrong on Monday, this has been known to happen, as I was suckered into a little producer wishful thinking that more home deliveries of food and other essential goods, as people stayed behind closed doors, would boost demand for the PE to package these deliveries.

Perhaps, yes. But I now feel, having spent the last few days talking to more contacts, that the loss of PE from reduced holiday activity will be a lot greater than any of the gains from more home deliveries. So will the loss of all the industrial and services activity. Starbucks has closed nearly half of its outlets in China and Disney and Tesla have suspended operations.

What of PP? There is some talk that demand for the non-woven PP needed to make medical face masks will bolster overall consumption and pricing. I don’t believe so. The loss of demand volume-wise from the closure of numerous Chinese auto and electronics plants will be far, far greater than any gain from non-wovens, as will be the loss of PP demand into packaging applications.

So clearly, despite the cutbacks in local polyolefins production, demand for polyolefins imports will be weak until the  virus is brought under control.

And even if, as we all hope, the number of new cases peaks very soon and the virus is contained, don’t automatically assume a quick return to normal industrial and consumer activity.

“Chinese officials have made the rare admission that mistakes have been made and so President Xi won’t want to lift the quarantine restrictions until he is absolutely sure that the situation is under control. There is a lot reputation and political standing at stake here,” said one of my trader contacts.

“I therefore think it quite possible that the Lunar New Year holidays will be extended again, beyond 9 February.”

Who is going to give first?

The Lunar New Year Holidays have already been extended to 9 February in the key manufacturing provinces of Shanghai, Jiangsu, Zhejiang and Chongqing.

The problem for PE is that this slump in Chinese demand is occurring at a time of major global oversupply with US exports at much more elevated levels than in 2017.  In 2017, for instance, the US exported 2m tonnes of linear-low density PE. I forecast that this will rise to 4.6m tonnes in 2020.

A positive on the supply front might be delays in increases in Chinese PE production. It already seems quite possible that China will be unable to raise its high-density PE by 15% in 2020 and its LLDPE output by 7%, our current forecasts.

But still, the loss of demand globally from events in China will add to overall PE oversupply, unless, as I said, major production cutbacks take place.

Who will give first? I don’t know. The US has to run its PE plants hard to get rid of unwanted ethane and get some type of return for the investors from its new cracket-to-PE complexes.

Europe has fully depreciated complexes, with thus low or no debt, and needs to operate for wider macroeconomic reasons.Asia ex-China has some advantaged gas crackers, some state-owned liquids crackers and has traditionally always ridden out these events for the sake of maintaining market share.

In the case of the Middle East, of course, it has unbeatable feedstock advantages and has hardly ever had to cut production for markets reasons.

But something, someone will have to give if this crisis continues. It will be a similar story in PP where this year major new capacity additions are taking place.

PREVIOUS POST Why coronavirus will be a much bigger deal for petrochemicals than SARS
NEXT POST Coronavirus: Global polyester chain faces major production cuts, shortages and cost increases