Vaccine hopes versus reality and the implications for petrochemicals 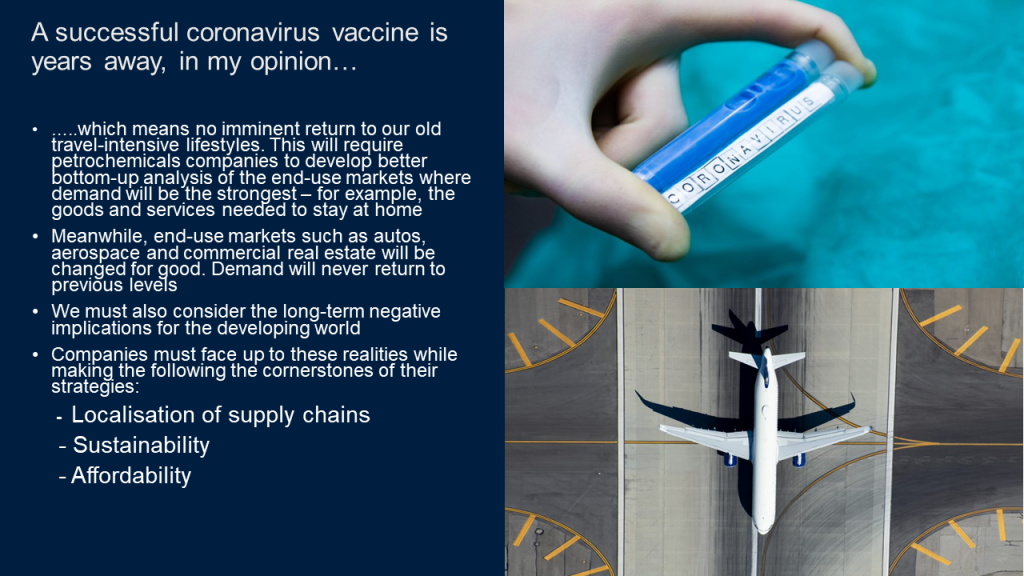 THE WONDERFUL poet, T.S. Eliot, wrote “humankind cannot bear very much reality”. One of the realities that I believe many us have failed to come to terms with is that an effective coronavirus vaccine isn’t just a few months away, but is instead several years away.

I believe we will eventually get an effective vaccine given the extraordinary efforts being made. But we are in for a long wait because of the need for adequate testing to ensure that it doesn’t cause harmful side effects side effects.

In a rush to cross the finishing line among all the competing nations and countries, what if we end up with a vaccine, or vaccines, that do cause significant side effects, pushing even higher the some 20% of people in the US alone who are against vaccinations? What then of the prospects for herd immunity? And even if herd immunity is achieved, this would still of course leave all the anti-vaxxers without protection.

There are also the problems of producing and distributing  vaccine globally including to all the remote villages in Africa and India. Who is going to cover the cost of providing the vaccine at a price the developing world can afford?  Where are we going to get the glass vials in enough numbers to distribute billions of doses? Where are we going to find sufficient healthcare workers to inject the drug?

Articles in The Atlantic and The Washington Post make some further critical points:

I’ve just scratched the surface of the hurdles that need to be cleared before we get to an effective vaccine or vaccines, which are detailed in these two important pieces of journalism.

Also consider an earlier article from New Scientist that quoted a 2013 study. The study found that between 1998 and 2009, the average time it took to develop a vaccine was 10.7 years. It is possible to speed this up – an Ebola vaccine took just five years. But try to speed this up any further, to the 12-18 months that the world is hoping for, and there are significant risks of lost investment with questions raised about safety.

Realities for the petrochemicals industry

The effects of the  pandemic on petrochemicals demand can be divided between non-durable and durable end-use applications (bear with me here as this new theme will link back to my main theme).

For example single-use packaging for food and hygiene have enjoyed stronger demand, benefiting polyethylene (PE), polyethylene terephthalate (PET) resins and to a smaller extent polypropylene (PP) and polystyrene (PS) producers. PP and PS are heavily consumed in durable goods, where in some markets, such as autos and textiles and garments, demand has totally collapsed.

This to some extent is still true. But we also need to think about the division between weak demand for things we need to move around versus the things we need to remain stationary – for example, goods that cater to working from home. We are of course not travelling anywhere close to as much as we did before the pandemic.

Demand for some durable goods needed in the home have been stronger rather than weaker since the pandemic began. An article by Trade Data Monitor points out that China’s shipments of home appliances rose by 37% in July on a year-on-year basis with exports of toys up by 22%. Meanwhile, exports of bags and containers for travel, some of which will have been for single use, fell by 23%. Exports of face masks, including face mask made from PP non-wovens, also rose by 31.3%, according to Reuters.

There will  be demand gains and loses losses from spending more time at home compared with less time in offices, airport lounges, aeroplanes and in foreign destinations. We must map what this means for all the petrochemicals and polymers, which will involve highly complex bottom-up demand analysis.

Some of the changes in our behaviour will be permanent. For instance, I don’t believe we will ever fly as much again even if we do bring the disease under control. The huge wealth loss resulting from the pandemic will last many years, limiting our ability to travel for leisure. Companies have found cheaper ways of doing things. Why send a sales executive on an overseas trip when she can do her job just effectively via Zoom or Microsoft Teams? And what about the insurance costs of flying employees because of the risk of another outbreak?

We will need to assess what a permanently lower level of flying will mean for packaging demand at airports and on aeroplanes. What also needs to be evaluated are the broader implications for economies heavily dependent on tourism. Thailand depends on tourism for as much as 18% of its GDP.

Think also of commercial property. Many us have found working at home a bonus because of the time and cost savings from reduced commuting. Companies under pressure to cut costs will not rent as much office space, especially in expensive central business districts. The effect on petrochemicals and polymers used in constructing office space is obvious. But also consider all the lost packaging demand as cafes, restaurants and bars in central business districts shut down.

Cars are going to last longer as people won’t need to drive to work as frequently. Car ownership will also decline. Reduced demand for public transport will also damage demand for the petrochemicals that go into the transportation sector.

This reflects the increase in extreme poverty that the United Nations University warned about earlier this year. It estimated that the pandemic could push as many as 580m people – 8% of the global population – into extreme poverty. The World Bank defines extreme poverty as living on less than $1.90 a day – a lot less than a cup of coffee in a trendy Western café.

The single biggest reason why petrochemicals markets will remain so profoundly affected is because a successful vaccine is years away. Only a successful vaccine can in my view bring the pandemic permanently under control due to all the problems relating to lockdowns, testing, tracing  and the inefficiency and lack of resources of some governments.

The right tactical approach for petrochemical companies will of course be to focus on the products and the grades of products where demand is the strongest. But some companies whose production is heavily weighed towards sectors such as transportation may not survive.

And to repeat again, as this so important, the three cornerstones of long-term strategies need to be:

The opportunities remain fantastic for the petrochemicals industry. But we are going to get nowhere if we don’t own up to the reality surrounding the prospects for a vaccine. We must also accept that the world has been changed by the pandemic in so many ways – and that in many ways the changes will be for good.