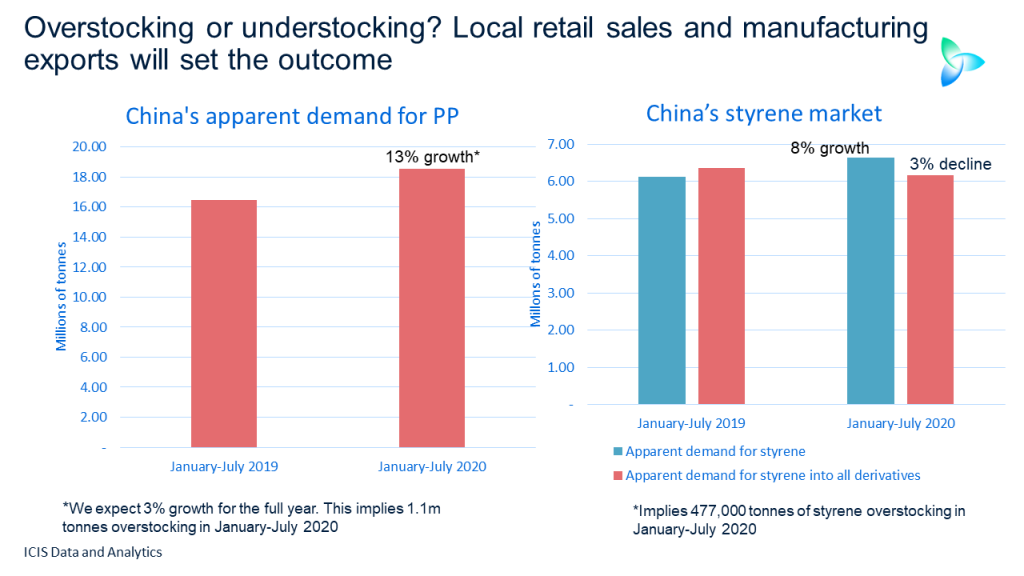 IF IT were easy, then there would be an oversupply of owners of large yachts in Monte Carlo. But understanding China has never been easy and has become a great deal harder because of the pandemic.  This makes “I really don’t know” the only honest answer to the question of what is going to happen to China’s economy, and thus its petrochemicals demand, during the rest of this year.

This does not mean we cannot still make a call about the balance of probabilities.  For me, despite the strong services result in China’s official August Purchasing Managers’ Index (PMI), the downside risks for local demand remain substantial. This is because China’s post-pandemic relief efforts may continue to favour high-income earners.

Government flexibility to address the widening income gap between the rich and everyone else seems limited by rising food-price inflation. This could restrict the scope for cash handouts to average-paid and low-paid workers. The government would run the risk of social unrest if the handouts drive food costs any higher, as food-price inflation is already at a ten-year high. Food prices have increased because of the worst floods since at least 1998 and what Reuters argues is the failure of central planning to prevent a major shortage of corn.

Further reasons to be sceptical of a big rebound in retail sales, which have been declining for seven months in a row, include the disruptions caused by the still very much under-reported floods. As of a week ago, at least 63m people had been affected and 54,000 homes destroyed. The total cost of the floods is so far estimated at around $36bn, which is of course tiny when you measure this against the size of China’s GDP. The bigger issue might instead be the delays to infrastructure spending – a major component of China’s post-pandemic stimulus.

It is also worth noting this comment from Liu Xuezhi, an economist at the Bank of Communications in Shanghai: “It’s unlikely that policymakers will roll out large stimulus [measures] over the rest of the year, and they shouldn’t. They should instead focus on implementing existing policies.”

Also consider these words from the China Logistics Information Centre, which helps compile the official PMI: “The recovery of demand is slower than that of production, which is starting to drag on the economic recovery. More than half of companies still list the lack of market demand as the main difficulty.”

Early last month, the light bulb came on when I realised that petrochemicals demand during the pandemic wasn’t just being shaped by non-durable end-use applications (good) versus durable end-use applications (bad). Illumination was provided by this article from Trade Data Monitor on China’s July exports, which increased by no less than 72% on a year-on-year basis to $237.6bn.

The article attributed the surge in exports to strong demand for all the things required to spend more time at home – and for medical devices. Exports of China’s high-tech goods increased 16% to $69.4bn. Mobile phones jumped 43% to $11.1bn. Furniture exports rose 23% to $5.5bn. Home appliance shipments rose 37% to $6.6bn. Exports of toys were up by 22% to $3.5bn. Exports of medical devices soared by 78% to $2bn.

I see this as important for the global petrochemical business. Whilst demand may have been strong for petrochemicals that go into finished  goods used to equip homes as offices – and for spending more time at home in general – demand has clearly collapsed for all the stuff related to travelling to the office and working from the office. The same applies to overseas travel for business and leisure. This was reflected in the 23% July fall in China’s exports of bags and containers used for travelling.

A further factor identified by Trade Data Monitor that bolstered China’s July exports – something else that has again supported the global petrochemicals industry – are the billions of dollars spent by Western governments on financial support for low-paid workers.

It will be important to study China’s August export data, which are due out this month, to discover the extent to which the strong demand for goods related to staying at home has been sustained. To what degree has this been a one-off surge as people finish kitting out their homes to function as offices? In the US, Congress has failed to agree on an extension of higher unemployment payments which expired at the end of July. Job-furlough schemes are coming to an end in the EU.

It may take several more months for any reductions in home spending and government stimulus to effect China’s exports. What seems certain is continued strong demand for medical devices over at least the remainder of 2020.

Another certainty is that China will continue to support its exporters as the country seeks to compensate for weaker-than-expected demand at home through greater shares in overseas markets. Support has included low interest-rate loans, tax cuts and reductions in government-mandated employment costs, reports the New York Times. Cost advantages have helped drive China’s share of world exports to nearly 20% in April until June, up from 12.8% during the same period in 2018 and 13.1% in 2019, says the newspaper.

But what if the trade hawks in the White House view China’s increased share of exports as another example of unfair trade practices and then act on this opinion? A resumption of the trade war could be viewed as a vote winner ahead of the November presidential election. There are also suggestions that the value of the Yuan has been kept artificially low versus the US dollar and the Euro. The value of the Yuan has long been a sensitive subject among the White House trade hawks.

Implications for polypropylene and styrene monomer

But the ICIS Supply & Demand Database estimates that China’s full-year real demand for PP (real demand is consumption adjusted for inventory distortions) will only increase by 3% over 2019.

This points towards overstocking because of what I believe will be continued weakness in local retail sales, even if exports of hi-tech goods, household goods and face masks made from PP remain strong. Some 20% of local PP demand is thought to comprise exports of finished goods made from PP, or packaged from PP, compared with 35% a decade ago. This reflects the increasing importance of overall domestic consumption versus exports.

Applying our base case forecast of 3% demand growth for the full year, January-July overstocking in PP would amount to 1.1m tonnes. But this of course is a preliminary number and may be either be an over-estimate or perhaps even an underestimate.

It is a similar story in styrene monomer (SM). Apparent demand for SM grew by 8% in January-July 2020 – again on a year-on-year basis – compared with a 5% increase in January-June 2020. This consisted of a 19% rise in net imports and a 5% increase in local production. This was also out-of-sync with our forecast for full-year growth, as we expect a 4% decline. This implies SM overstocking in January-July of 702,117 tonnes.

Complicated stuff as always, and, I said at the beginning, even more complicated than before the pandemic. But what is crystal clear is the need to much more closely and more frequently monitor the macro data, the petrochemicals data and on-the-ground market intelligence This is a long pre-amble to my second free advert this week: You need ICIS to support you in this work, even more than usual.

PREVIOUS POST Pandemic and the developing world: No quick and easy solutions
NEXT POST The China polyester mystery continues in a world turned upside down