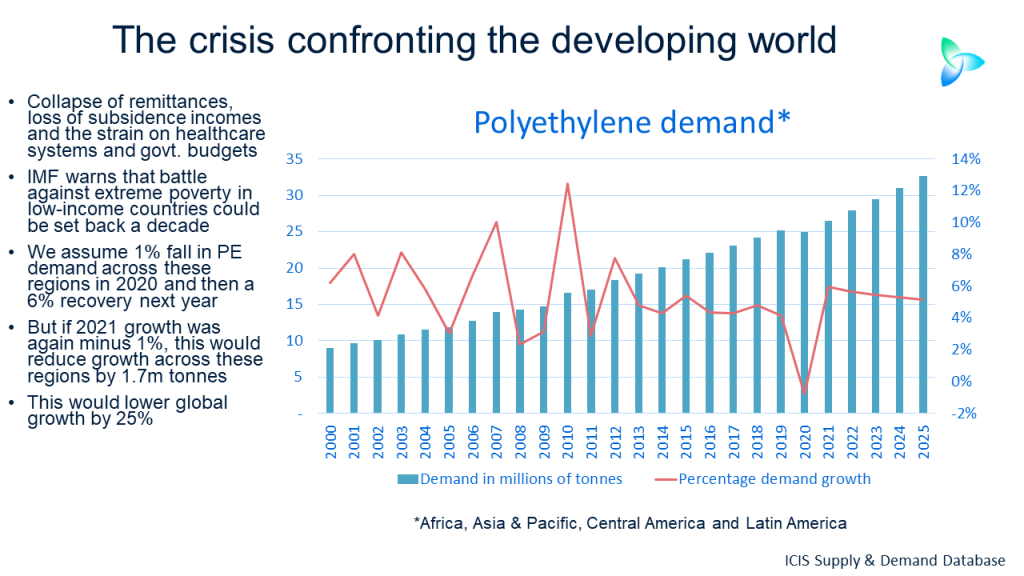 POVERTY alleviation in low-income developing countries could be set back a decade by the pandemic, warns the IMF in a new study. Problems it highlights include the collapse of remittance payments from overseas, down by 18% year-on-year in Bangladesh in January-May, lockdowns that have left workers living on the margin unable to feed themselves and the strains on inadequate healthcare systems and government budgets.

Because of what the Wall Street Journal says is “a lack of testing capacity, limited access to data and secretive governments across Africa,” the scale of infection may be far greater than the numbers are telling us. The World Bank warns that these unknowns could prevent African economies from reopening fully for years, which would make life so much worse for all those workers on the margins, who, because of inadequate social safety nets, have to work every day to feed themselves and their families.

The United Nations University warned earlier this year that as many as 580m additional people could be pushed into extreme poverty by the pandemic, which would be 8% of the global population. Extreme poverty is defined by the World Bank as living on less than $1.90 a day, which, as we all know, is much less than a cup of latte in a trendy rich-world café.

Back to the disturbing IMF study which also involved a survey of African countries. More than 70% of respondents said that they were concerned about running short of food because of the effect the pandemic was having on food production and distribution. The longer that schools are shut down in the developing world, the harder it will be for the region’s very youthful population to get the necessary education to reduce extreme poverty, which was another concern highlighted by the IMF.

US stock markets in August posted their best monthly gains since April, largely on confidence that the worst of the coronavirus crisis is behind us. That might, with a fair wind behind us, be the case in some parts of the developed world. But the critical issue remains a realistic assessment of the likelihood of a globally effective vaccine or vaccines anytime soon. Echoing my warning two weeks ago, the Wall Street Journal, in the same article, reports on African countries being forced to wait on a vaccine because of production constraints and the scramble by wealthier countries to secure supplies. This will surely also apply to other developing regions.

On Sunday, India surpassed the US to register the highest daily number of new cases. India is in a very different situation from the US because it cannot maintain lockdowns for too long due to the hundreds of millions of its people that live on the margin, who have to work every day to provide food. India’s easing of lockdowns is being blamed for the increase in new cases in rural areas following the success of bringing the virus under control in the megacities.

What this will mean for petrochemicals demand

There is a lot of what I feel is distracting talk about V-shaped recoveries, of demand completely recovering over the next 1-2 years from the pandemic. As I discussed on Monday, you can no longer treat all petrochemicals demand as more or less all the same and therefore link recoveries with the inevitable rebounds in GDP. It has become much more complicated than this.

In the developed world for some end-use applications and in some downstream manufacturing and service industries and geographies, there may be no V-shaped recovery because demand hasn’t actually fallen in line with the collapses in GDP. Demand could have been better than before the pandemic in some cases because of greater food packaging demand, hygiene needs and working from home.

Not so in the developing world where, because of all the problems highlighted above, I believe that consumption across all products and all grades is worse than before the pandemic. This will even apply to food packaging and hygiene, the most basic of modern-day consumers goods, because a great many more people in poor countries have been pushed into extreme poverty. When you suddenly find yourself earning less than $1.90 a day, affording a bottle of disinfectant or shampoo is beyond your means.

This explains why the ICIS Supply & Demand Database is predicting a 1% contraction in polyethylene (PE) demand growth this year in Africa, Asia & Pacific, Central America and Latin America (see the above chart). This would be down from the 4% growth across these regions which occurred in 2019 over 2018.

The above chart also shows that we forecast will be strong rebound in growth across the regions in 2021. We are predicting a 6% increase , more than making up for the lost ground lost this year. But what happens if this doesn’t happen because of all the issues highlighted above? Let’s assume, for argument’s sake, that 2021 growth is again minus 1%:

The fact that these developing regions will account for a quarter of global growth in PE in 2021 is a reminder of our heavy dependence on continued economic success of the developing world.

So, what can be done about this crisis?

The same IMF study says that low-income developing countries cannot get out of this crisis on their own. Their recommendations include guaranteeing essential health supplies, including vaccines and protecting critical supply chains, especially for food and medicine

The IMF also urges countries to avoid protectionist measures and ensure that developing economies can finance critical spending through grants and concessional financing .Debt relief will also have to be provided by the G20 group of countries, adds the IMF.

Petrochemicals companies are already doing some terrific charity work through, for example, providing personal protective equipment either free-of-charge or at low costs to poorer countries. And I know that lobbying work is taking place to persuade politicians and global institutions to carry out the kind of measures recommended by the IMF.

Let’s all hope that these efforts produce the desired results. But if they do not anytime soon, and this to me seems quite a likely scenario, growth in petrochemicals markets in some of the poorer regions of the world could, quite literally, be set back a generation.

PREVIOUS POST The pandemic and petrochemicals demand: a whole new approach is required
NEXT POST China will struggle to boost local retail sales during rest of 2020 with export outlook uncertain