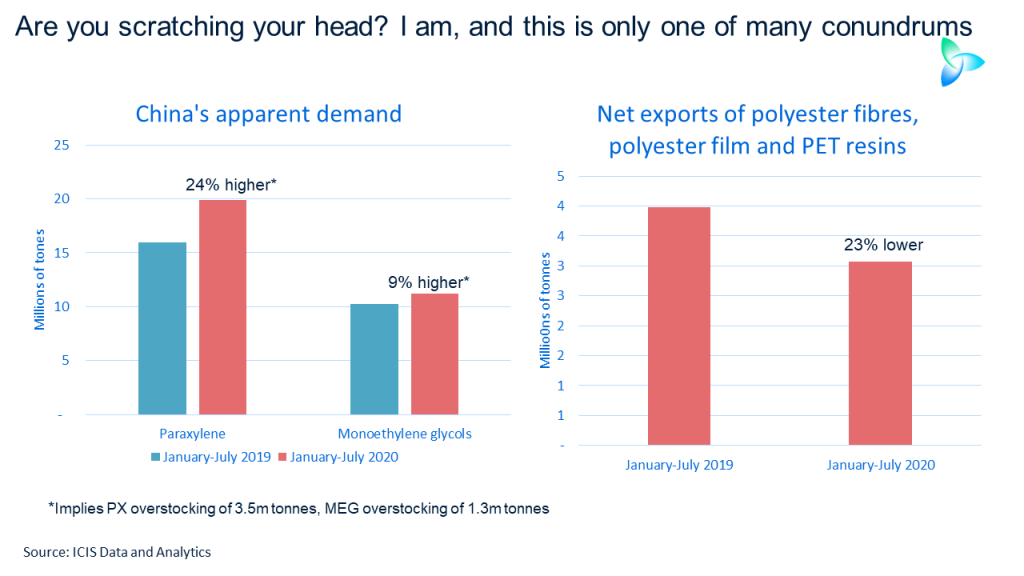 SOMETHING very strange is happening in China’s polyester industry which has enormous implications for the global industry, as ICIS data continue to point towards strong local apparent demand growth for paraxylene (PX) and monoethylene glycols (MEG) despite seemingly weak downstream fundamentals. The world “enormous” is no hyperbole because China completely dominates exports up and down the value chain.

Note that if you subtract the 723,709 tonne January-July imports from Brunei from the total, as the Brunei Hengyi Petrochemical’s 1.5m tonne/year PX plant is 70% owned by Hengyi – a Chinese purified terephthalic acid (PTA) producer – net imports from other sources were down by 14%. But this doesn’t of course make any difference as these imports are in effect local production. So apparent demand was still up by 24%.

Either 24% or 9% growth in January-July apparent demand compares with our estimate for full-year real demand growth – which is demand growth adjusted for inventory distortions – of minus 1%. This would be the first year of negative growth in China since 2008, when consumption fell by 3%.

It is a similar story in MEG. Net imports were up by 13% in January-July. We don’t provide monthly estimates of MEG production, but on an annual basis we are forecasting a 5% increase in domestic output.

If you again divide our full-year 2020 MEG production estimate by 12, multiply by seven and add this to the net import figure, you will get a 9% year-on-year increase in apparent demand. Our forecast for full-year real demand is a 4% decline, which would again be the first negative number since 2008 when demand slipped by 5%.

Move downstream and one is left scratching one’s head a great deal harder. While China is by far the world’s biggest importer of PX and MEG, it dominates global exports of polyester fibres, polyester films of polyethylene terephthalate (PET) resins. Add the January-July net exports of these PX and MEG derivatives together and you find that they are down by 23%.

Taking a step back, what about PTA? As a reminder, PX makes PTA and PTA is then reacted with MEG to make polyester fibres, polyester films, PET resins, and a much smaller-volume product – polyether sulfone resins (PES resins). The January-July PTA trade data provide little explanation. The data show that China has gone from a small net import position in PTA last year to a tiny net export position in 2020.

Garment industry struggles due to pandemic

Back to the polyester fibre story. We know that global garment sales have collapsed because of the pandemic, as this very useful article from just-style.com suggests. Quoting Chinese government data, the article says that in January-June, China’s garment industry saw its earnings fall by 16.4% for major enterprises, with profits down by 23%. China saw the largest decline in apparel shipments to the US on record, despite unit prices falling by 17% to $1.88.

China’s decline in polyester fibre net exports (on an individual basis they were down by 20% in January-July) reflects that it is not just the Chinese garment industry that is struggling, as China is a major supplier of polyester fibres to clothing manufacturers in countries such as Bangladesh, Pakistan, India and Vietnam. Some of these countries saw a rebound in clothing exports in August, but this has yet to make up for big declines in shipments in January-July.

In all this mystery, however, it is important note that the same just-style.com article says that China’s combined textiles (non-clothing) and apparels exports were 3.2% higher by value in January-June. This was the result of a huge surge in shipments of the textiles used to make personal protective equipment.

But by far the biggest share of polyester fibre consumption has traditionally been in clothing, pillowcases, sheets, curtains and carpets, etc. Polyester and cotton blends, along with non-woven polypropylene, are used to make face masks. This might mean there has been a major shift in the composition of China’s polyester fibre demand – as of course China’s face mask exports have gone up significantly.

As I said, though, polyester fibre net exports are down substantially so far this year, the biggest January-July percentage decline on record. Anecdotally, also, local polyester fibre demand has been consistently described as weak by our ICIS pricing editors and by my sources since the pandemic began.

This leaves the possibility that, despite weaker polyester film and PET resin exports, there has been a huge surge in Chinese exports of rolls of plastic films, PET bottles and other finished plastic products. Film and bottles sales globally have been very strong because of the boost the pandemic has given to demand for single-use packaging in general.

But in this strange world, anything is possible

We live in a very strange and much-changed world. The nature of end-use demand for all the petrochemicals has been radically reshaped by the pandemic in ways that we are only just beginning to understand. It is therefore possible that polyester fibres, polyester film and PET resin demand has been turned on its head by the virus, meaning there is no major overstocking in PX and MEG. But this to me seems unlikely.

What is more likely is that there is overstocking, but it represents a calculated risk by PX and MEG importers and local producers. They have built stocks on the assumption that when global clothing demand comes roaring back later this year – and there are tentative signs of at least a modest recovery – inventories will quickly and comfortably be depleted by higher downstream demand. Will the risk pay off? We shall see.

But what is again crystal clear is that you need ICIS data and analytics more than ever before to keep track of PX, MEG and other petrochemicals markets. Markets have never been as complex and as uncertain in my 23 years at ICIS. This makes an independent and objective external view a critical success factor for your business.

PREVIOUS POST China will struggle to boost local retail sales during rest of 2020 with export outlook uncertain
NEXT POST Ah, I see: China's booming demand mystery a little closer to being solved