Home Blogs Asian Chemical Connections US polyethylene: resilient demand could be at risk from delay to new stimulus

US polyethylene: resilient demand could be at risk from delay to new stimulus 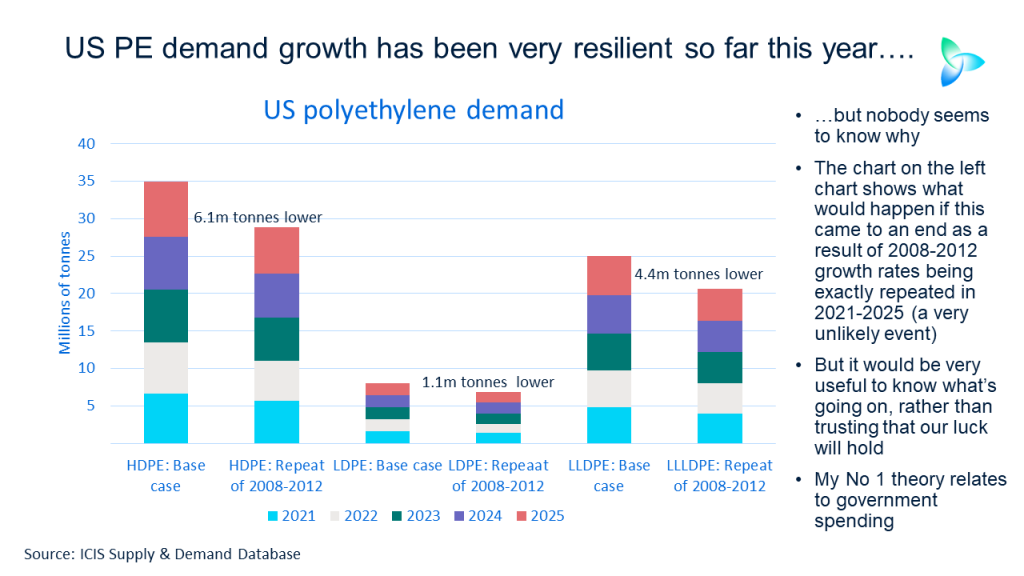 THIS REMAINS a mystery that needs to be solved: why US polyethylene (PE) markets continue to perform so much better in 2020 than they did during the Global Financial Crisis.

Why it is such a mystery is that the economic events of 2008 were nowhere near as grim as this year. US Q2 GDP in 2020 contracted by an astonishing 31.4%, the biggest decline on record. Full-year US GDP is predicted to contract by 4% in 2020. This would contrast with the World Bank’s estimate that US GDP fell by 0.2% in 2008.

And yet consider our US PE percentage growth forecasts for 2020 and compare these to what actually happened in 2008:

A common argument is that we cannot link PE demand growth too closely with GDP as the polymer goes into so many essential items that we buy, regardless of our economic well-being.

But why therefore did we see such a cataclysmic decline in PE demand in 2008, at a time when millions of Americans saw their access to credit frozen as lenders foreclosed on their homes? This suggests that economic well-being is linked to our levels of PE consumption – even if it is not that closely linked with headline GDP numbers.

Another common explanation is the collapse in WTI crude prices in 2008 from a June high of $133.37/bbl to a December low of $41.12/bbl.  It is argued that this led to a big destocking process as PE buyers held back from purchases in anticipation of lower PE prices in the future.

Here is the thing, though: as oil prices rallied during 2009, PE demand continued to decline. HDPE demand fell by 5% as LDPE consumption cratered by 11%. LLDPE demand did, though, recover to positive growth of 3%. In other words, a big round of destocking wasn’t followed by major restocking.

My theory, based on talking to brand owners and retailers mainly in Europe and Asia, is that PE demand is resilient for three reasons, which are as follows in order of importance:

New US government stimulus package still in the balance

Early last week, it looked as if a long-delayed new US stimulus package, which would replace the one that expired at the end of July, was edging closer.

But the Financial Times wrote in a 1 October article: “Speaking to reporters on Thursday, Ms Pelosi [the leader of the House of Representatives] said she was ‘optimistic’ but that important differences remained on unemployment benefits, tax credits for poor families and in particular on aid to state and local governments, where the two sides are ‘way off’. Republicans and the White House have resisted large payments to improve state and local authorities’ deteriorating finances.”

The same article detailed evidence that the expiry of the old stimulus package, which included one-off payments of $1,200 and regular additional unemployment insurance payments of $600, could be taking effect. Quoting the US Department of Commerce’s Bureau of Economic Analysis, the Financial Times reported that personal spending fell by 2.7% in August, a loss by value of around $544bn to the US economy.

Then, of course, came the bombshell of President Trump’s positive coronavirus diagnosis, which Nancy Pelosi said made a deal more likely, according to a 2 October New York Times report. But ‘”congressional aides and Washington policy analysts remained more pessimistic, saying that Mr Trump’s diagnosis and a monthly jobs report that fell short of forecasters’ expectations were unlikely to motivate Democrats and Republicans to break a months-long deadlock and make a deal,” said the New York Times.

Last Friday’s disappointing US jobs report was the third month in a row of slowing jobs growth, with the number of new jobs created way short of analysts expectations.

A new US stimulus deal will surely be done at some point. But the longer the delay, the greater the economic scarring.

And this again underlines my argument that tracking the scale and effectiveness of government stimulus in the West has become a critical factor in estimating petrochemicals demand.

The influence of the US government on the livelihoods of America’s lower wage workers quite obviously goes beyond whether a new stimulus deal can be reached. There is also, for example, the outcome of the presidential election in November (no comment) and the US relationship with China.

But the amount of government spending in the West on stimulus, and thus the effect on economies, is at historic highs. The scale of US spending is such that the amount of debt held by the US government by the end of 2020 will roughly equal the size of the American economy, and will surpass it in 2021, the Congressional Budget Office said in early September. This would be the biggest fiscal imbalance since the end of World War II.

This is why petrochemicals companies need to set up teams dedicated to studying the impact on demand of government policies, if they haven’t done so already. I also believe that teams need to be established to track demand from the bottom up, from the shelves of supermarkets all the way to the polymer plant.

Micro shifts in demand are going to be myriad over the coming years as we dip in and out of pandemic crises. Our lifestyles will continue to adapt as increased home working and reduced travel become permanent features of our lives. Creative destruction will lead to job losses in old industries while jobs are created in new industries. Teams must therefore track consumer demand to a level of detail that has never been required before.

So, finally, let us consider my theoretical chart at the beginning of this post. Please note that I don’t expect this to happen as history never exactly repeats itself. It might rhyme a little. But we are not going to see an exact repeat of the  growth rates in the five years from 2008 and 2012 during the five years from 2021 until 2025 (the downsides for US PE growth are calculated on an exact repeat of 2008-2012 over the next five years).

But if this were to happen, cumulative US HDPE demand would be 6.1m tonnes lower than our base case, LDPE would be 1.2m tonnes less and LLDPE 4.4m tonnes lower. Wow. Aren’t we lucky?