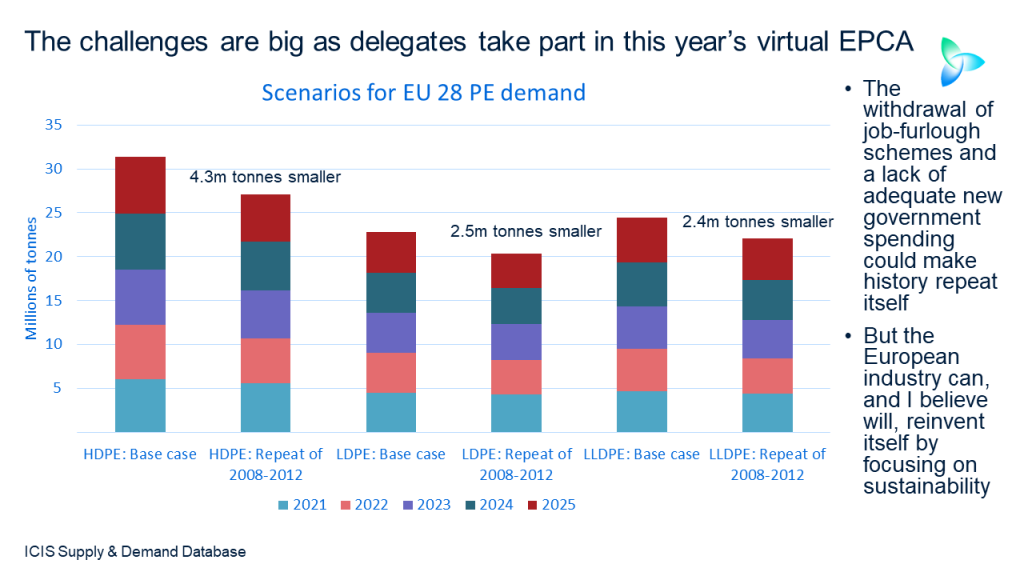 AS DELEGATES take part in this year’s virtual annual European Petrochemical Association (EPCA) meeting, they need to try and get to the bottom of the mystery of why demand for the product at the heart of the steam cracker business – polyethylene (PE) – has done so surprisingly well.

Once they have reached a consensus about why PE is doing so well in Europe, the next step is to try and determine what is going to happen next.

Your response to this challenge might be, “I don’t have a clue” as markets have probably never been so uncertain and volatile. But everybody needs to plan – and it is possible to identify the key signposts that will indicate the direction of travel.

Let us start with the context. Europe falls into the same category as the US, where, as I discussed on Monday, PE demand has also been remarkably resilient.  Focusing only on the EU 28:

As I discussed on Monday, my three working theories as to why PE demand in the West has done so well are as follows, in order of importance.

Delegates must therefore return from the EPCA meeting and lobby their companies to set up specialist teams that will study the extent and effectiveness of future government spending – unless, of course, their companies have already done so.

We know that the most critical issue in the EU is the extent that new government spending programmes will minimise the economic scarring caused by the pandemic, as temporary job-furlough schemes are wound back.

The impact of the furloughs has been huge. The Financial Times reported in June: “Employment subsidy programmes cover 45m jobs, or a third of the workforce, in Germany, France, Britain and Italy and Spain. They are credited with preventing Europe from suffering the type of catastrophic job losses that have hit the US since the coronavirus pandemic struck.”

Daniel Lacalle, an economist with a very impressive CV, wrote in a BBN Times 5 October article: “In Europe, according to Eurostat, the unemployment rate increased to 7.4% in August, while in the euro area it rose to 8.1%.

“Eurozone unemployment would be close to 11% if we used the same calculation as the United States. The OECD estimates that unemployment will rise above 10% in the eurozone before year-end as furlough schemes end,” he added.

Many of the companies that signed-up for furlough schemes faced bankruptcy because of the length of the crisis, he said. With almost one in five companies in Europe facing substantial losses and many close to bankruptcy, a significant portion of furloughed jobs would become full-time unemployment, he warned.

Lacalle said that furlough schemes were designed to protect jobs for a few months while business activity recovered. The hope was that this would be a short crisis. But the crisis will of course last for years and will radically and permanently reshape economic activity.

I doubt that we will ever again fly as much. Think of all the lost packaging and so PE demand associated with reduced time in airports, on planes and in foreign destinations. 31% of the Greek economy and 26% of the Spanish economy depend on tourism. It could take a generation for the two countries to replace lost economic growth.

Permanently higher levels of home working will shift packaging demand from city centres to the suburbs.  Will the gains in PE demand from this change in working patterns be greater than the losses? Or will the result be neutral?

The outcome depends on the number of new jobs that replace lost old jobs. Jobs in restaurants and hotels in city centres and tourism-dependent economies will be far fewer in number. But new employment will be created as new online solutions are created.

Rana Foroohar, in a 5 October Financial Times article, reminded us that software start-ups create very few new jobs. She warned of the risks that this presented, as most new post-pandemic business investment could be in online businesses.

Filling jobs created by new online solutions will, I believe, largely hinge on the extent to which governments are able to fund retraining schemes. If the right training doesn’t happen in the EU, new jobs will go overseas.

Can the EU continue to afford to intervene heavily in economies or will schemes, such as the EU Recovery Plan, become too expensive as inflation leads to higher interest rates? The ability of EU countries to afford post-crisis will depend on their individual fiscal positions.

This leads me on to another of my theoretical charts, which can you see at the beginning of the blog post. The chart includes our base case for PE demand in the EU 28 during the five years from 2021 to 2025. This is compared with what would happen if exactly the same percentage growth patterns we saw in the five years from 2008 until 2012 were repeated in 2021-2025.

This very likely isn’t going to happen because, whilst history often rhymes, it rarely precisely repeats itself.

But this is not the point of my exercise. The point is to instead illustrate how lucky we have been, how we have avoided a much more severe downturn because of the three big changes in PE demand noted above, the most important being government stimulus.

The other key message from the above chart is that the V-shaped recovery we expect under our base case is by no means guaranteed, for all the reasons I’ve outlined above.

If 2008-2012 growth patterns were repeated in 2021-2025, cumulative PE demand across the three grades would be 9.1m tonnes smaller than our base case. Annual average demand growth would be at minus 1% rather than plus 1%.

Too pessimistic? Why, given the environment we face today? I am actually optimistic about the future for the European petrochemicals busines. But that optimism has to be tempered by realism about the near-term outlook.

But the European industry has a fantastic opportunity to re-invent itself. Come forward the engineers, the scientists, the innovators, who have, in the past, made the industry such a success. See below my personal blueprint for the future.

European petrochemicals companies must also establish new teams to devise more sophisticated “bottom up” analysis of demand, all the way from the supermarket shelves to the polymer plant.

The crisis has, in my view, taught us is that GDP does not work as a measure of PE or any other petrochemicals demand. As detailed above, EU GDP is set to fall by a far greater amount in 2020 than in 2008 and yet PE demand is going to be much stronger.

There might be, for instance, a pick-up in packaging demand related to greater city-centre activity as people temporarily return to their offices. But the development of more online solutions that make working from home easier and cheaper could then lead to a return to the suburbs.

As the new demand teams create highly flexible and constantly iterative approaches to monitoring demand, flexibility will also need to be applied to sales and plant operations. Greater digitalisation will, I believe, play a big role in helping European petrochemicals companies prosper in this new environment.

Success will also hinge on the extent to which producers focus on the No1 growth opportunity: Sustainability. The EU New Green Deal, which can be largely self-funding through carbon taxes and/or credits, promises to create many vitally needed new jobs.

In my opinion, the deal will be fully implemented, and quite possibly extended, because of a consensus among the public and legislators that human activity is behind climate change.

Petrochemicals producers need to quickly switch to renewable sources of feedstocks before their hydrocarbon feedstocks disappear. The number of European refinery closures can only accelerate due to lost fuels demand resulting from the pandemic, the electrification of transportation and autonomous driving.

Don’t just take my word for it. In two of the scenarios in the last BP Energy Outlook, there is no recovery in global oil demand to pre-pandemic levels until at least 2050.

This switch to renewable feedstocks, whether they are bio-based or based on chemicals or mechanical recycling, will obviously satisfy another important objective of the EU New Green Deal: tackling the plastic-waste crisis.

I believe we have gone beyond a historic tipping. Renewable energy costs have collapsed and will continue to fall. The sector now stands on its own two feet, without subsidies. Electric battery costs are rapidly declining and storage capacity continually improves.

Demographic changes. rising environmental pressures and the changes to our live resulting from the pandemic will mean less demand for private mobility. This will hasten the rise of autonomous vehicles, as will the kind of digital solutions that can support the new post-pandemic global economy.

And, whilst there might have been a temporary dip in anxiety over single-use plastics, the long-term direction is clear:  Europe will, I believe, move towards a circular plastics economy quicker than many people think.

To repeat, the opportunities are big for the companies with the right strategies. This is also a great time to be a scientist or a chemicals engineer.

This industry, which contains many brilliant minds, helped build the old non-renewable economy. This is where history can exactly repeat itself as we help build a new circular economy.

PREVIOUS POST US polyethylene: resilient demand could be at risk from delay to new stimulus
NEXT POST China's short and long-term domestic consumption challenges will be difficult to resolve