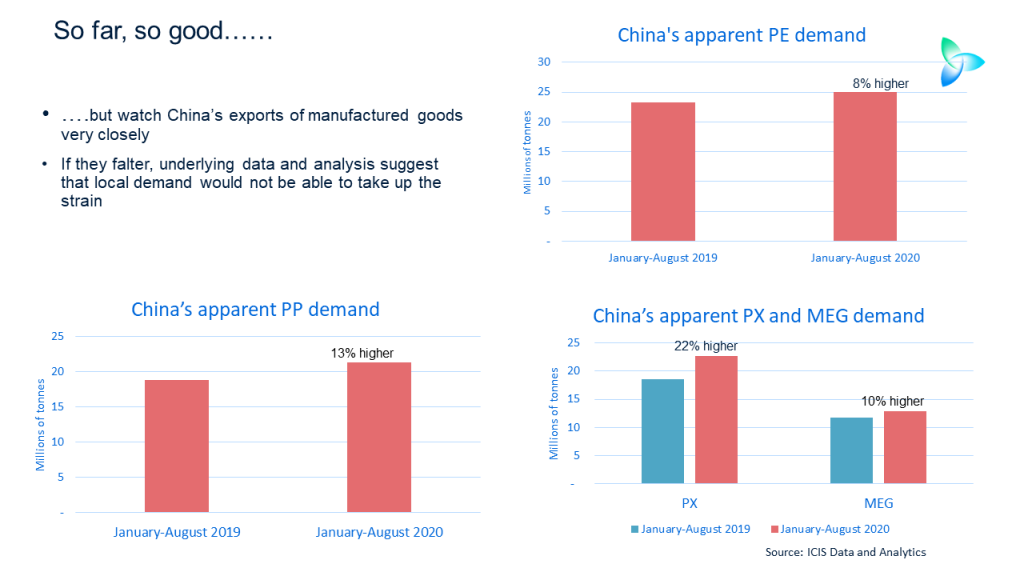 THERE will be a lot of official data released about booming consumer spending during China’s Golden Week and National Day holidays, which run from 1-8 October. The numbers, when they emerge later this month, will be broadly seen as further evidence that China’s recovery is firmly on track.

This is  excellent news for those wanting to ride the momentum of rising local stock markets. And, more importantly, the pockets of strong recovery in services – for example, in eating out in restaurants during the holidays – is good news for the domestic component of China’s economy.

And for petrochemicals and polymer producers and traders, they might be able to surf the wave of this recovery until the end of this year.

On an apparent demand basis, (apparent demand comprises the official net import numbers and our estimates of local production), the latest data remain very positive. We are of course close to the end of 2020, and so, if nothing very quickly upsets the proverbial apple cart, this year is going to turn out to be an awful lot better than most people had expected, including me, when the pandemic first arrived:

China’s economy looks like it is confounding all the sceptics once again. Few people have over the years made money out of shorting China, except during a brief period in late 2014 and early 2015 when things looked as if they were going pear-shaped. Maybe this economic miracle, to use the old and tired cliché, will go and on.

Michael Pettis, a finance professor at Peking University and a senior fellow at the Carnegie-Tsinghua Center, is an economist I’ve followed for many years. His post in the FT Alphaville blog is an example of the kind of digging behind the data that is essential for anyone who needs to do serious scenario planning on China.

He wrote that the 0.5% rise in retail sales reported for August, the first monthly increase so far in 2020, needs to be put into the context that January-August retail sales were still down by 8.5%.

Pettis also makes the argument I’ve been making for the past few months, that this remains mainly a production-led recovery. Over the last couple of months, it has also been on export-led recovery

“By expanding public sector investment in logistics and infrastructure, underwriting an expansion of credit to businesses, and otherwise subsidising production, Beijing has bolstered production to create the employment that has indirectly boosted consumption,” he wrote.

Beijing was pushing hard on the supply side, mainly because it wanted to lower unemployment as quickly as possible, he added.  The supply-side push was supporting demand, but the retail sales figures point to the failure of local consumption to so far match supply.

The supply-led approach carries several risks, including a decline in the stellar Chinese export growth we’ve seen over the last two months (there will have probably been no big fall in exports in September, given than the export-order component of the official September PMI was so strong).

China’s “natural hedge”, its dominance of just about every manufacturing value chain, means that while some of its export trade has collapsed, it has enjoyed big increases in exports of the things we need for our new pandemic lifestyles.

These increases include face masks, which helps explain strong apparent demand growth for PP (non-woven grades) and PX and MEG as polyester fibres are also needed to make face masks. PP demand has been further buoyed by strong sales of Chinese electronics as people kit out of their homes as offices.

But, as face mask production recovers in the West as lockdowns ease, this article in the excellent Caixin magazine suggested that overseas demand for Chinese face masks could decline. The same article, quoting a consumer survey, said that demand for electronics could be sustained for the time being.  At some point, however, we will reach the tipping point when most people have finished converting their homes into offices.

The strength of Chinese exports also depends on the path of the pandemic. If the path continues to widen, as we are seeing in some countries in Europe and some states in the US, intensified social distancing and lockdowns would dent demand.

But it looks as if Congress in the US might pass a new stimulus package following the expiry of the last package at the end of July. Only last week it appeared that a new package would not happen before the November presidential election.

The wrangle over a new US stimulus package underlines my argument that it is so important to track the continued scale and effectiveness of government stimulus in the West, as it is government stimulus that has supported low-paid workers. Without this support, we would have seen a collapse in petrochemicals demand on at least the scale of 2008-2009, during the Global Financial Crisis. The declines might have been even greater.

A further risk is that if unemployment remains high in the West, China’s strong export growth will draw the attention of politicians other than just Donald Trump. Trade protectionism against China may increase.

Another risk to supply side growth described by Pettis was the rapid increase in local fixed-asset investment. This reflected what he wrote was “faster growth in Chinese public-sector investment, which, because most of it is no longer productive, increases the Chinese debt burden.”

Real unemployment and holes in the social safety net

One of the advantages of the wonderful world of the web is that you do not have to dig too hard to find what lies behind official Chinese government data. All you need is a sceptical mind and a willingness to hammer the Google search engine.

Hammering the search engine reveals that even people working for or with the Chinese government are raising concerns about China’s domestic economic recovery.

“In Beijing, many otherwise intact roads are being dug up and repaved. Investments like this are inefficient and a waste of resources and should be stopped as soon as possible,” said Wang Xiaolu, deputy director of the official government National Economic Research Institute, in a speech reported in the same Caixin article that I have linked to above.

The article, again quoting Wang, highlights the following underlying issues behind the recovery in local demand.

Urban unemployment, which was 5.7% in July, was defined as “working less than one hour a week.” If measured by “working less than 10 hours,” the rate could double, said Caixin. Migrant workers who had returned to the countryside after losing their jobs were also not counted.

“The social security net has holes. So many unemployed or under-employed workers have not been given enough protection,” said the magazine.

Unemployment insurance covered only 200m of China’s 440m urban workers. The reason was that most migrants could not receive payments because their hukou is not registered in the same city they work, said Caixin. Hukou is the Chinese household registration system.

“Poor economic performance has generated income uncertainty, encouraging low- and middle-income people to save more and consume less. This creates a vicious cycle, by constraining purchases from the small and micro businesses they support, further affecting employment, income and consumption,” wrote the magazine.

The risk is therefore clear: export growth could stall over the next few months with domestic demand failing to take up the strain. This would cause a retreat in global petrochemicals markets, as of course it is China that largely drives global markets.

Or everything might be fine, and, as I said earlier, petrochemicals producers and traders may be able to surf the wave of stronger-than-expected demand until the end of the year.

What happens next year and beyond is a separate subject and will largely be set by the outcomes of this month’s critical Fifth Plenum, which for the petrochemicals industry is at least as important as the US presidential election in November.

The long-term challenge China faces is rebalancing away from investment and exports and towards more local demand. Domestic consumption as a proportion of China’s GDP has fallen to just 39% over the last decade, which is very low for a developing country. US consumption accounts for 68% of its GDP.

More immediately, though, I would be remiss if I didn’t also warn about the risk that any slowdown in China would pose to oil prices, and so, of course, petrochemicals prices. As I’ve been arguing for several months, the big rise in Chinese industrial production since April has been supported by local refiners taking advantage of very low crude prices. China has stockpiled big volumes of imported crude.

From here on in watch out of the pace of Chinese oil imports. Even without a Chinese slowdown, the pace of imports already appears to be slowing.

“Tankers departing for China and Myanmar have carried 7.7m barrels of crude and condensate daily this month [September], according to cargo-tracking firm Kpler, down from the all-time high of 14.1m barrels a day in May,” wrote the Wall Street Journal.

“Crude oil discharged at Chinese ports in the last two weeks [up until mid-September] were below 8m barrels per day, at levels similar to what China imported in March and April, Fotios Katsoulas, Liquid Bulk Principal Analyst, Maritime & Trade, at IHS Markit, said in an analysis,” said OilPrice.com.

Please, please be careful out there and treat the headline data on China’s economic recovery with the scepticism it deserves. All maybe fine until, as I said, the end of 2020. But it is important that you build a Plan B as we live in exceptionally volatile and uncertain times.

PREVIOUS POST Petrochemicals and autos: the last 50 years provide little guide to the future
NEXT POST US polyethylene: resilient demand could be at risk from delay to new stimulus