EXCESSIVE inventory building down all the major petrochemical value chains is a global rather than just a Chinese problem, according to Paul Satchell – the UK-based chemicals analyst with global investment bank  Canaccord Genuity in his latest Volume Proxy research note.

“The Volume Proxy continues to decline, with the index now in clear negative territory,” wrote Paul in his 21 October note (the Volume Proxy is intended to gauge volumes, and thus demand, through weekly changes in 33 spot chemical prices in the US, Europe and Asia, as assessed by ICIS).

“The current level of -11 contrasts sharply with the late-August peak of +19,” continued Paul.

“Europe looks worryingly weak, following the period of strength during Q3 3013. Asia remains neutral following the Golden Week holiday. The US line has now turned negative, after a period of neutrality” (see the chart below showing a composite view of all the major petrochemicals markets, divided by region). 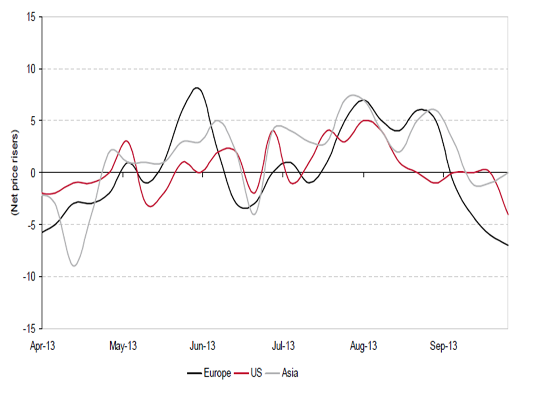 This next chart shows that globally, according to Paul, aromatics and intermediates are very weak, olefins continue to decline and polymers remain neutral and range-bound. 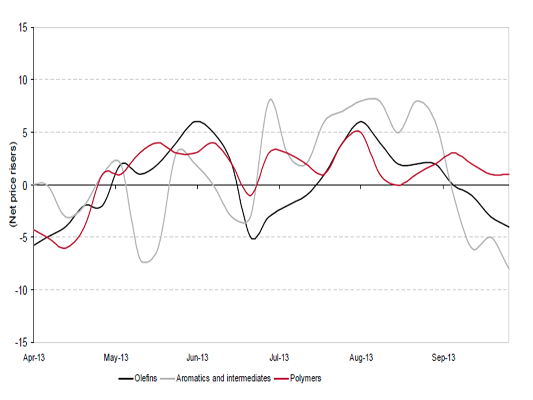 “We believe that the weakness which has become clear over the past few weeks is probably caused by de-stocking, following a period of inventory build during the surprisingly strong Q3 2013,” he said.

“In our view, real demand fundamentals have been so poor that inventory cycles have become the prime determinant of marginal demand.

“Hence, the rare quarters since mid-2010 where volumes in basic chemicals have been decent, have coincided with periods of robust outlooks for oil prices. Naturally, these have been followed by de-stocking when oil prices softened.”

His outlook for oil prices during Q4 is benign and so he thinks de-stocking is likely to add further downward pressure on markets.

But he added that the strength of the third quarter would likely deliver financial results for several chemicals company ahead of market expectations.

Thus, Paul thinks that everyone should be cautious about any predictions of even stronger earnings in Q4.

And he is also with us when he thinks that policy decisions announced during China’s November plenum (click here for our detailed assessment of the plenum) could depress China’s petrochemicals markets. Just the perception of a major shift in economic direction never mind an actual shift – which, anyway, is likely to take a while to put into effect – could be enough to send markets southwards.

Ironically, if the November plenum doesn’t deliver a reform programme viewed as strong-enough by the majority of observers, petrochemicals traders in China might view this as an opportunity to remain long.

But regardless of the outcome of the meeting, China is already undergoing a credit down-cycle that will, at some point next year, produce less room to speculate on inventory accumulation – and less spending on infrastructure and, thus, also less demand for chemicals and polymers.

The effects of any de-stocking would, of course, be exacerbated if tighter credit occurs as oil prices are also on the decline (more on oil in a later post but suffice to say here, chemicals companies need a very wide range of price scenarios for 2014).

A surge in lending is one of the major reasons for the upturn in Chinese Q3 GDP growth to 7.8% compared with 7.7% in Q1 and 7.5% in the first quarter, according to this article in the Financial Times.

We said back in May that overall economic growth, and with it petrochemicals markets, might take a while to feel the full impact of increased liquidity.

“Total social financing – China’s widest measure of credit – rose 52% year-on-year in the first five months of 20113, an astonishing pace,” added the FT in the same article.

“At the time, analysts and investors expressed alarm that the surge in credit was not translating into stronger growth.

“These concerns have now been shown to be misplaced –it just took a little while for the lending flows to translate into real activity.

“The slowdown in credit growth since the middle of the year – it is now closer to 20% year-on-year – should begin to be felt in the coming months, leading to slightly softer growth, said Wang Tao, an economist with UBS.”

We can’t rule out, of course, that the Chinese government won’t kick the can further down the road by announcing another stimulus package.

But we think this is unlikely, given the consistent tone of remarks being made by senior politicians and all the countervailing pressures to rebalance the economy.