Home Blogs Chemicals and the Economy “No pain, no gain” the outlook for China in 2014 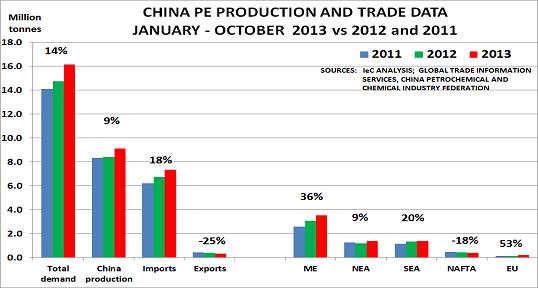 Its been a great year for polyethylene (PE) demand growth in China.  But whether this relates to real or speculative demand, and whether it will continue next year, is another story.  As the chart shows, with trade data from Global Trade Information Services:

Yet few people on the ground in China think underlying market growth has really been 10% this year.  As New Normal ebook co-author John Richardson has noted, most of those involved in day-to-day business think the market has really grown 4-6%, as in 2012.

The difference, as with 2009’s bumper volumes, has been speculative demand linked to stimulus programmes.  Back in February, the blog analysed developments since 2006, and wondered whether 2013 would see a similar stimulus package to 2009.  Today, we know that the answer was ‘yes’, as the new leadership sought to build support before the critical economic plenum meeting in November.

They clearly felt that a fall in published GDP to the 7.5% level was a big enough shock to the system, after a decade at 10% plus.  So they allowed lending to spiral out of control, as in 2009 after the collapse of exports following the start of the Crisis.

But that was then, and this is now.  The plenum is past, and president Xi and premier Li now probably have 10 years of rule ahead of them.  They know they have to change course, and have to implement the new policies agreed at last month’s plenum.  These are quite different from those of the past decade.  Now Xi has spelt out their 2014 priorities in more detail:

“China should press ahead with sweeping reforms in order to facilitate development and enhance transformation of the development pattern and improvement of people’s livelihood.  Reform should first target areas for which the Chinese public has the most expectations for reform, and focus on problems that have hindered the country’s economic and social development.  All of society should be allowed to feel the tangible benefits of the reforms, so as to rally positive energy for further reforms.

“For next year, China should effectively safeguard food security, adjust industrial structure, promote more balanced development among regions, improve people’s livelihood, step up air pollution control and continuously improve opening up.  Sweeping reforms are relevant to all aspects and people, so it is necessary to build consensus and seek unity of thinking.”

6 top priorities.  And not a word about further stimulus spending.

This, of course, makes perfect economic and political sense.  The key concern for many Chinese today is the appalling pollution that aflicts Shanghai, Beijing and other leading cities for an increasing number of days each year.  The blog had a visitor from Beijing last week whose flight was nearly grounded in reaction to pollution.  In Shanghai, this became a reality over the weekend, whilst cars were also banned from the roads and factories closed.

The maintenance of social stability is essential for the continuance of Communist Party rule.  In turn, this requires the leadership to refocus China’s development towards a less-polluting and more service-oriented model, whilst also maintaining job growth.

Equally, the window of opportunity for the leadership to enact these changes is already starting to close.  If they don’t move now, the chance to build momentum behind them will be lost.  And as Li Keqiang keeps reminding us in his speeches, “This ‘self-imposed revolution’ would ‘even feel like cutting one’s own wrist’”.

“No pain, no gain” is therefore probably going to be the way forward for China in 2014.