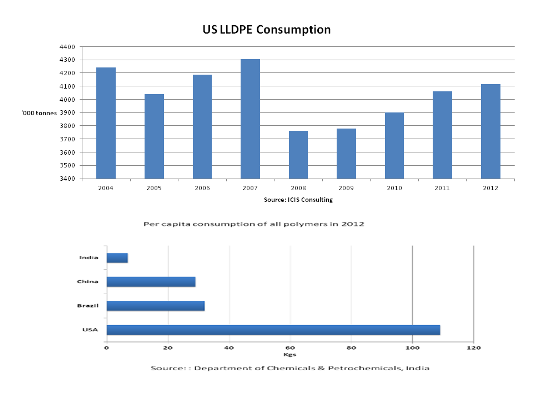 WHEN somebody very senior in the petrochemicals industry makes a bold statement – one that pulls no punches – it is worth taking note.

And so it is worth reading in full what Stephen Pryor, ExxonMobil Chemical president, said at the opening ceremony for ExxonMobil’s latest Singapore petchems complex on 8 January.

“There is an overhang of ethylene capacity. It is a global challenge, but it is a particular challenge in Asia with all the capacities that have been built,” said Mr Pryor.

“Asia remains at the bottom of the cycle. We’ll be in a challenging environment for a while and the extent to which the shale phenomenon [in the US] will add to that challenge – that’s a fact of life too,” he added.

“The reality is the US from a chemical standpoint is a very mature market. We have some demand growth domestically in the US but it’s a percent or two, it’s not strong demand growth,” Pryor said, adding that polyethylene (PE) had hardly grown in the US in a decade.

The chart at the top, showing US linear low density PE (LLDPE) consumption, supports Mr Pryor’s point about very little growth. It is the same story for ethylene and PVC.

In fact, as we can see, consumption remained below its 2007 peak in 2012. This obviously is partly to do with the global financial crisis, but five years on, consumption had yet to return to that peak. We worry that demand will not, or rather cannot, return as long the demographic challenge isn’t addressed.

The second chart, below the one on LLDPE, illustrates the ExxonMobil Chemical president’s point about the US being a mature market.

“I worry where the growth in domestic demand is going to come because most people in the US already consume most of the plastics that they need,” said a business development manager with a global polyolefins producer.

“The problem also is that as we improve the ability to down gauge – i.e. enabling processors to use less resin to produce the same volume of, say, plastic film for cost efficiency and environmental reasons – we are eating into our own demand growth. This is a factor not only in mature markets, such as the US, but also in developing countries.

“And so while one team within a company – the polymer science experts – are constantly working on the ability to further down gauge – the irony is that another team is working in a different direction. These are the engineers who are enabling us to build ever-bigger plants, thus raising the definitions of what are world-scale crackers and polymer plants.

“Perhaps we need to build smaller plants, and/or focus on upgrading existing facilities, in order to reflect a much more uncertain demand-growth environment.”

But, of course, the US is adding some 25m tonnes/year of ethylene capacity – most of it post-2017 – which includes six 1m tonne/year plus crackers.

The ExxonMobil president, however, also stressed that the long-term fundamentals of Asia remained strong – and the next decade would see global demand for chemicals growing by 50%.

“Two-thirds of it [demand growth] will be out here in this region [Asia],” he said.

ExxonMobil could well be in a very strong position to serve this growth, both from its new capacities in the US and from the Singapore complex, because of its ability to crack a wide range of feedstocks. For example, its second Singapore cracker can make use of up to 50 different refinery streams – and can even crack crude oil directly.

But we continue to worry that global markets will fragment into regional trading blocs. Asian governments might well prioritise domestic economic growth over the cost-per-tonne benefits of importing very competitively-produced chemicals and polymers.

This is doesn’t necessarily mean that Western companies cannot participate in these regional trading blocs, but a different approach to growing consumption in developing markets might be necessary. We will start the debate on what this approach could be in later posts.

And here’s something else to consider, which presents another challenge for US petchems companies planning to export their surpluses.

“Can we declare the end of the BRICs? When the acronym came into common use, a decade ago, the BRIC countries—Brazil, Russia, India, and China—contributed roughly 20 percent of global economic growth,” wrote Gordon Orr, the director of McKinsey’s Shanghai office.

“Although China was already the heavyweight, it did not yet dominate: In 2004, the country contributed 13 percent of global growth in gross domestic product, while Brazil, Russia, and India combined contributed 9 percent, with similar growth rates.

“Compare that with the experience of the past two years. China accounted for 26 percent of global economic growth in 2012 and for 29 percent in 2013. The collective share of Brazil, Russia, and India has shrunk to just 7 percent. It’s time to let the BRIC sink.”

We will return to this subject in a lot more detail later on.