US Shale Gas And Income Distribution 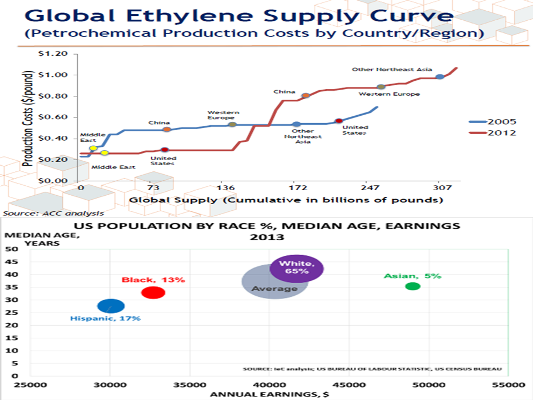 Kevin Swift, Chief Economist and Managing Director of the American Chemistry Council, provided a comprehensive and very valuable summary of the opportunities during his speech at the 2nd ICIS Pan American Phenol-Acetone Conference, which took place in Houston, Texas, last week.

The top chart shows the benefits being delivered to the US petrochemicals industry by the energy revolution. As you can see, North America had the second lowest costs of ethylene production after the Middle East in 2012. And it had a 50-60% cost advantage over Western Europe and Asia.

Nobody is suggesting that energy by itself can achieve long term, strong economic growth. There are plenty of other plus factors that also make up an optimistic outlook including an excellent innovative culture, which is nurtured and supported by strong intellectual property rights protection.  The shale gas revolution is a prime example of this culture that stands to benefit many other industries.

But our second chart is also worth studying.

This means that the Bayboomers, who created a once-in-many generations economic boom to the US, are predominantly white.

As more and more Babyboomers retire, this will radically change spending patterns and therefore pose a major threat to consumption, which drives 70% of the US economy. It will also drive up healthcare and social security costs to possibly unsustainable levels.

The good news is that the US has an enormous opportunity to once again renew itself through immigration.

Pew Research shows that 92% of population growth has been in minority communities since 2000.

Black women are also having fewer children – just 2.1 today versus 2.5 babies in 1990, whilst Asian and white women both now have 1.8 babies.

If the US can, thus, achieve a sufficient “trickle down effect” to its lower-income groups, it might be able to increase its birth rate amongst the sections of its population that are growing.

But does it have the right economic and social policies to achieve this?

And even assuming that those policies are in place, how long will it take to raise the birth rate sufficiently to replace the lost “wealth effect” of all those retiring Babyboomers?

We think that these types of questions need to be discussed and answered in order to place in the benefits from the energy revolution in its full, long-term context.