“Stagnation might prove to be the new normal” for the US 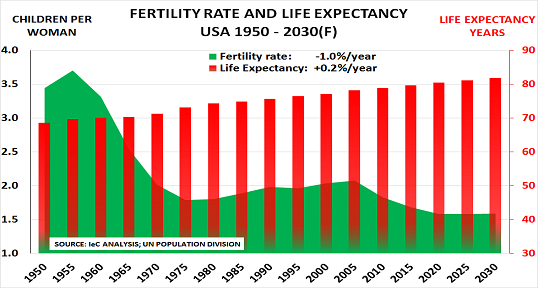 The blog returns today to its series on how demographic changes are impacting the 5 largest economies in the world.  Having looked at China and Japan in NEA, it now moves across the Pacific to the USA.  Like all the major economies, the US is now ageing fast as a consequence of the trends in the chart above:

It is often said that the US has a “better” ie higher fertility rate than other Western countries.  As a result, it is argued that it doesn’t face the same problems from an ageing society.  But this is not quite the whole story, however, as the chart on the right from a new Rand Corporation study shows: 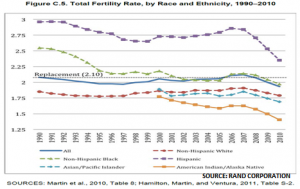 This matters for the economy and demand patterns.  Sadly earnings in the US vary widely by race, as the blog noted back in October.  Thus median earnings for whites were $792/week in 2012.  But Hispanics earned nearly 25% less at just $568/week, whilst blacks earned 20% less at $621/week.

Equally important for future demand is the rapid ageing of the overall population.  Slightly more than 1 in 4 adult Americans were in the New Old 55+ generation between 1950-2000, but since then the proportion has been rising fast.  It is already 1 in 3 adults, and will be 41% of all adults by 2030.

This data again hides vast differences within the different racial groups.  The white population has a median age of 42.3 years – very similar to European and Japanese levels.  The overall median age of 37.3 years is thus only lower because Hispanics (median age of 27.6 years) and blacks (median age of 32.9) are much younger.

Essentially, therefore, this means that currently higher-paid whites will be retiring, and there will be relatively more lower-paid Hispanics and blacks in the workforce – unless salary patterns change quite dramatically.  Add to this the fact that most Americans have not made adequate provision for retirement, and it is clear that today’s already weak trends in consumer spending are likely to get worse, not better.

The US pension system is too complex to summarise in a blog post, but the new OECD Pension Handbook suggests that net relative pension levels are 41% of average earnings.  The position is getting worse, not better however, as the blog discussed back in February when updating chapter 5’s data in Boom, Gloom and the New Normal.

A simple way to describe the problem is that a couple retiring today at age 65 would need a pension fund of $1m just to equal US median earnings of $40k/year.  And even then, there is a 72% chance that the fund will run out before both of them die.

US policymakers are slowly waking up to the fact that the US is indeed following the same path as Japan.  Former Treasury Secretary Lawrence Summers wrote this week that “stagnation might prove to be the new normal”.  But he and other policymakers still appear blind to the obvious demographic cause of the slowdown underway.

Until they recognise this reality, it is hard to have a sensible debate about how to move forward.