Home Blogs Asian Chemical Connections Global Polypropylene In 2018-2025: What To Plan For 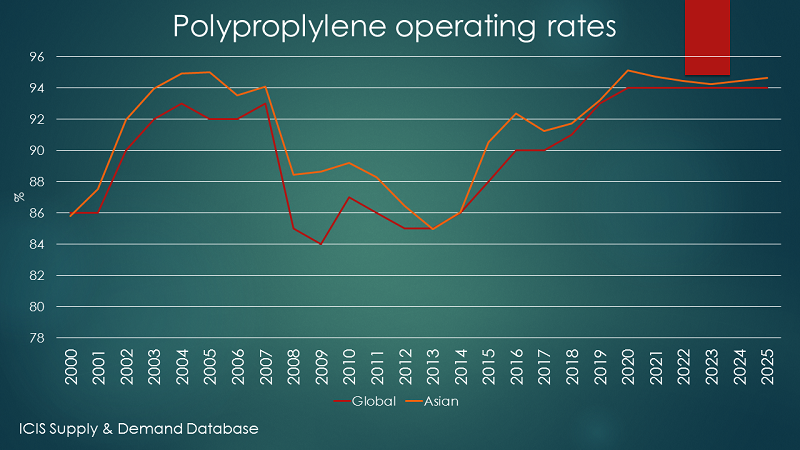 THIS could be an excellent investment opportunity. Our ICIS Supply and Demand Database base case for Asian and global polypropylene (PP) operating rates sees the steady and steep climb that began in 2014 carrying on until a peak in 2020.

In that year, global operating rates will reach 94% and Asian capacity utilisation 95% – around the same levels as in 2003-05 during the last big industry upswing. And in 2020-25, rates will plateau at very healthy levels.

This is a sound base case, built around our assumptions of steady economic growth and a dearth of new PP investments.

After the big China capacity splurge in 2009-2014, which led to the sharp dip in Asian operating rates, confirmed new Chinese capacity is slowing down on delays to coal-based projects.

This is the result of China going cold on coal-to—PP and coal-to-polyethylene (PE) investments because the fall in oil prices has made naphtha-based polyolefins more competitive.

Meanwhile, of course, most of the new crackers being built are ethane-based and so are essentially ethylene machines. These predominantly US-based projects will make vast new quantities of PE, but very little PP:

Scour the rest of the world and you will struggle to find significant amounts of new PP planned.

In India, for example, we forecast that demand will increase by 4.2m tonnes between 2018 and 2025 with production set to rise by only 2.2m tonnes.

And in Southeast Asia (SEA), robust demand growth could be met by very little new capacity other than the big new confirmed RAPID plant in Malaysia and possibly two new plants in Vietnam.

Again under our base, between 2018 and 2025, SEA’s production will rise by 3m tonnes against a 6.4m tonnes jump in consumption.

An alternative view on supply and demand

Our base case is an excellent starting position for planning around different upside and downside scenarios for PP. We can help you with this planning, as part of our consultancy services.

Downsides include a weaker than expected global economy on the large amount of debt that’s been built up since 2008 not being justified by stronger future demand.

Ageing populations in the West and increasing automation threaten to make future demand weaker than many people expect. This would make today’s debt levels unsustainable and force major write-offs before the world can enjoy strong economic growth again.

Then there is the China wildcard. We simply don’t know if its economic reforms will work. If they don’t, under my worst-case scenario the country’s PP consumption will only rise by 7.4m tonnes between 2018 and 2025. That would compare with our base case of a 12.2m tonnes increase.

And what about consumption of PP copolymer grades into the autos sector?

The rise of autonomous driving could be very gradual, taking more than a decade to have a meaningful effect. Or it could happen far more rapidly than most of us expect and result in a sharp fall in global auto sales and thus PP copolymer demand.

This depends on technologies developing to the point we are easily able to hire an autonomous lift only when we need it, via our smartphones.

If we are living in the West we might be more than willing to hire rides only when we need them because of the squeeze on incomes being caused by ageing populations. Why buy a car at all, and tie up all that depreciating capital, when it is going to sit in a garage 96% of the time unused?

It is not just in the West where this might happen. In China’s smaller cities, we could see successful introduction of autonomous driving for environmental and cost reasons.

Whilst we are on the subject of the environment, what about a growing legislative response to the some 4.2bn tonnes of polymers in general that the world has dumped into landfills and the natural environment since 1978?

The “less is more” drive to recycle more plastics might combine with increasing legislative pressure over the consensus that climate change is human-made. This two sides of the same coin. This would again, of course, dampen demand for virgin polymers, including PP.

Another demand-side threat to PP might be from replacement by PE in certain applications such as injection moulding, if all the new PE supply makes PE cheap enough relative to PP. But perhaps for technical reasons this will turn out to only be a minor threat.

The supply side of the alternative argument largely rests on China where, despite the slowdown in coal-to-olefins projects, China is pressing ahead with a major new wave of naphtha, ethane and LPG crackers.

As yet we have no details about what will be downstream of these proposed crackers – and how many of these crackers will actually go ahead.

But we do know is that China’s propylene capacity is likely to increase by at least 35% from its 2016 level to 36m tonnes/year. It seems likely to be at least this number because we only know the ethylene and not the propylene capacities of several of the proposed crackers.

What about trade flows?

Most of us can only remember a world where free trade increases rather than declines. This has led to today’ standard business model for petrochemicals investment.

The model is this: You can build a plant just about anywhere in the world, provided you have good feedstock advantage and logistics etc., because you’ll always be able to export production that’s surplus to local demand.

But what if China’s One Belt, One Road (OBOR) initiative is a complete success, creating a self-sustaining free trade zone that excludes much of the Europe and the US?

US petrochemicals producers might in particular suffer from exclusion from the markets of the 65 countries that make up the OBOR. This could be a side effect of the White House’s “America First” strategy towards international trade.

And here’s the thing: If the OBOR is enough of a success then China’s economic reforms as a whole will very probably work. Its economy would, as a result, continue to power ahead.

In such circumstances, China PP demand growth in 2018-2025 might be higher rather than lower than our base case.

But building new PP capacity to serve this strong demand will be about location as much as feedstock advantage and logistics. It may only be viable to build new plants to serve China inside the OBOR because of trade barriers between the OBOR and other regions.