China’s Polypropylene Market: The Right Questions You Simply Must Ask 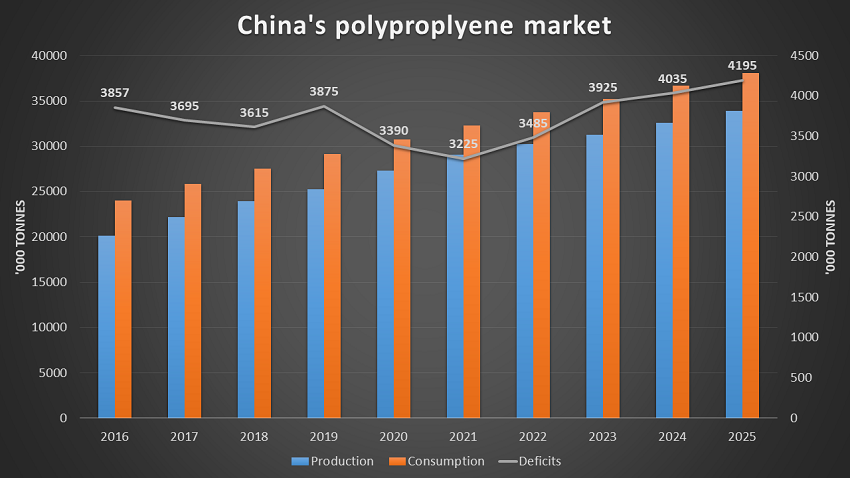 On the surface, the above chart represents very good news for exporters of polypropylene (PP) to China. As you can see, our base case sees import volumes creeping up from around 3.9m tonnes in 2018 to 4.2m tonnes in 2025.

But this chart should be merely a starting point for a much deeper study of what might happen in China’s PP business over the next ten years. This analysis is essential because of all the macroeconomic and PP industry-specific uncertainties.

What applies to PP can also be applied to a large extent to your analysis of other polymers markets in China. This is the kind of deeper dive analysis that we provide at ICIS Consulting.

The importance of regional per capita GDP 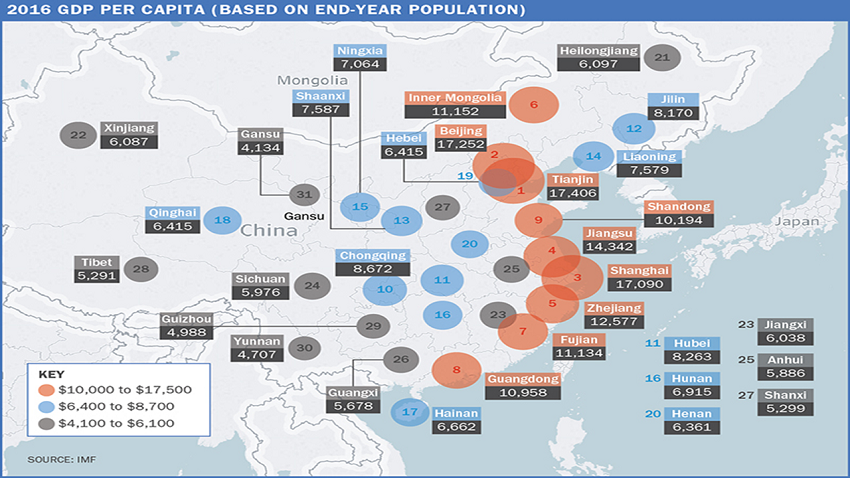 Good analysis of China’s PP market should start with thinking through the implications of the above map, which, based on IMF data, shows 2016 per capita GDP by province.

In poor China, people can only dream about being one day rich enough to be part of China’s mobile internet sales boom. They instead remain short of enough jobs in basic manufacturing.

One key area of research should be into the level of today’s consumption of differentiated (medium value) and speciality (high value) grades of PP in rich China, and how this might grow.

China has to escape its middle income trap because of rapidly rising wage costs in its rich provinces. If it fails to do so – and this is a very possible scenario – growth in demand for differentiated and speciality grades in China will of course slow down. More importantly, the whole of China’s economy could end up stagnating, which would affect consumption growth in all grades of PP.

You still have to be careful even if your base case assumes a quick and easy escape from the middle income trap. If China is going to escape the trap then it has to move into higher value manufacturing to justify its higher wages.

China might, as a result, acquire the technologies to make its own differentiated and speciality grades of PP. These capacities could end up being produced downstream of the 14 new world-scale crackers China wants to build in chemicals industry parks located in its rich provinces.

Eight of China’s planned new crackers will be integrated with grassroots refineries. China will, as a result, seek cheap crude supplies for all these refinery-cracker complexes. The Middle East in general is the obvious place to look because of the region’s big reserves and the rapid approach of Peak Oil Demand.

Might China also explore making use of the Saudi Aramco and SABIC technology for directly cracking crude in a steam cracker, thereby side-stepping the need to build a refinery? We don’t know at this stage. But we do know that Saudi Arabia and China are cooperating on developing the technology.

China is also evaluating importing US ethane and US LPG, and LPG from elsewhere in the world, in an attempt to take advantage of very long global natural gas markets. This could again boost the economics of China’s new wave of steam crackers – and also its new propane dehydrogenation (PDH) units.

With propylene supplied at very cost to PP plants, will any differentiated and speciality grades that China produce end up being sold more on cost efficiency rather than value? .

There could also be a learning curve here. If China does opt for much greater production of differentiated and speciality grades of PP, will it have the sales and marketing knowledge to sell on value? Could it leave some of the value on the negotiating table because of its greater familiarity in selling commodity grades?

What about the further issue of balancing production? The big new world-scale PP plants that will be downstream of China’s new steam crackers and PDH plants will still have to make a large proportion of commodity grades.

Sell too many differentiated or speciality grades and there is always a risk that these grade become commoditised. Will China have the experience to balance production of different grades to prevent this from happening?

Or am I entirely wrong here? Am I badly underestimating the Chinese ability to innovate, based on an outdated view of Chinese manufacturing?

There is every chance that, thanks to ample government support for innovation, China leaps up the learning curve. China might end up producing, marketing and selling differentiated and speciality grades of PP at the same level of competence as overseas suppliers. In this case, overseas suppliers would see their markets in China all but disappear.

Please also note that the chart at the beginning of this blog post does not include new PP capacities that will be downstream of China’s new wave of steam crackers and PDH units. We cannot include what we don’t know as many of these projects are at such early stages that we don’t know what olefins derivatives they will include. But there could well be enough new PP plants to challenge our base case assumption that imports will remain at around 4m tonnes per year until 2025.

But the task is BIG, as our provincial GDP per capita chart so clearly illustrates. According the World Bank, about 40% of China’s population live on less than $5.50 per day.

Xi must square the circle of better environmental protection with boosting income levels in poor China. The difficulty here is that coal mines, steel mills and factories in other high polluting manufacturing sectors are being shut down as part of China’s battle to clean up its air, soil and water.

Take China’s rust belt – the northeast provinces of Heilongjiang, Jilin and Liaoning – as an example of a region badly affected by these shutdowns. The map shows how far this region is already a long way behind rich China. Unless enough new jobs are created to replace the old ones being lost as coal mines and steel mills shuttered, the rust belt could fall even further behind.

Might Xi instead decide to ease up on today’s ferociously intense environmental clean-up campaign? This his would risk the flight of too many middle class, rich people in the developed provinces to overseas countries.

Quality of life has become a major issue for the middle classes. If they leave in big numbers than China might not be able to achieve the innovation necessary to escape its middle income trap.

Here is another dilemma: Unless China’s environmental crisis is dealt with, rising healthcare costs will become a major drain on the economy.

Back at the level of the PP industry, we need to address these two basic issues to understand consumption in poor China:

We then need to understand what proportion of different grades of PP are sold in eastern versus western China to develop a sensible sales and marketing strategy.

Clearly, of course, differentiated and speciality grade consumption will be much greater in eastern China. In provinces such as Gansu, where per capita GDP was just $4,000 in 2016, it seems likely that sales will remain heavily concentrated in basic commodity grades, such as raffia and injection, for many more years.

What about current PP production in poor China? This is where China’s coal reserves are concentrated and so it is the location of coal-to-PP capacities.

As for future production, the coal-to-PP industry serves as a great example of the difficulty of squaring the circle of the environment versus jobs.

The gasification of coal – step one in the coal-to-PP process – produces high concentrations of particulate matter – i.e. air pollution. The whole process also generates more carbon dioxide emissions than steam cracking. This is during a period when China is trying to cut back on CO2 emissions as part of its commitment to the Paris climate deal.

For the time being at least, there is a slowdown in coal-to-PP capacity growth because of both the environmental issue, cheaper oil prices and very long global natural gas markets. Cheaper oil and natural gas have boosted the competitiveness of the steam cracking and PDH routes to PP versus coal.

But is this coal-to-PP slowdown permanent? Might China opt to once again prioritise coal as a feedstock for making PP?

If China can largely shift away from using coal to make electricity, the main source of air pollution, then the environmental gain could be greater than any loss from turning coal into PP. This would help solve the jobs issue in poor China. The new PP plants would generate new jobs in themselves and much greater levels of employment in downstream processing plants.

A return to rapid expansion of coal-based PP capacity could also challenge our assumption that Chinese imports will remain at around 4m tonnes per year until 2025.

Demand matters as well as supply

I have of course just raised the questions. For the answers you need to engage ICIS Consulting! But all the above should at least serve as a wake-up call that we live in a demand as well as supply driven petrochemicals and polymers world. Far too much of the standard, plain vanilla analysis looks as supply only and assumes that demand will take care of itself.