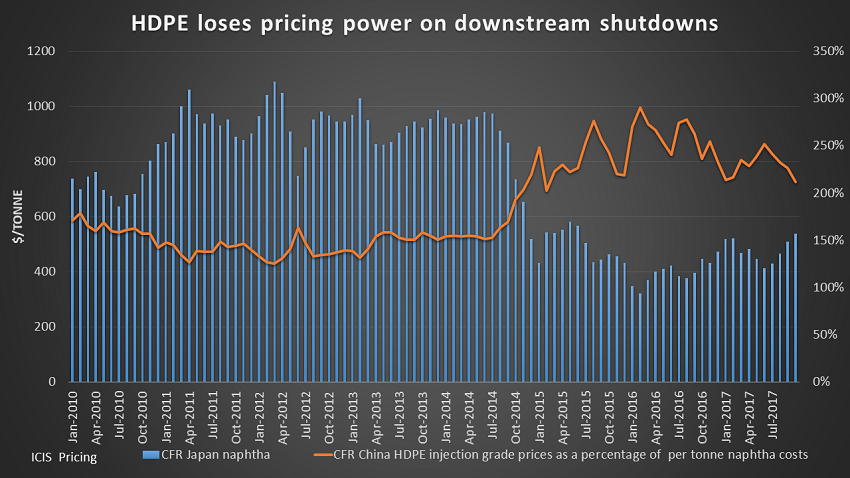 I BELIEVE that China’s environmental crackdown will continue to disrupt petrochemicals and polymers markets for the next few years.

This is not a temporary phenomenon that will largely go away with the end of the September 2017-March 2018 campaign to minimise air pollution in 28 northern cities. Further waves of environmental inspections will instead take place throughout China. These campaigns will have several objectives.

Firstly, China wants to penalise small-scale manufacturers who are flouting emissions rules through fines and temporary factory closures, typically for 2-4 weeks. During these shutdowns, companies will be given the chance to either upgrade their existing pollution-control equipment or install new equipment.

The second objective of the inspections is to permanently shut down many factories that are beyond reform – i.e. they are so polluting that the problems cannot be fixed through the installation of basic emissions-control systems.

The good news for China is that by permanently shutting down thousands more factories, they will solve another problem. Many of these smaller factories have of course poor economies of scale because of their size. They also operate in oversupplied industrial sectors.

Shut them down and you improve average economies of scale across a range of industries. You also get rid of oversupply and thus help resolve China’s debt problem. Inefficient factories in oversupplied sectors are borrowing more money merely to service existing debts.

Further financial pressure on inefficient manufacturers, including quite possibly petrochemicals manufacturers, will be brought to bear from 1 January next year, when China introduces a new environmental tax.

It all depends on which value chains you operate in.

Methanol markets have, for instance, tightened of late because most of China’s methanol is made via coal and coal as a  chemicals/energy source is a major target of the environmental campaign.

Closures of coal-based methanol plants in Q4 for pollution-control reasons will amount to a loss of some 740,000 tonnes of production, according to my ICIS China colleagues. This has already led to a rise in pricing. The CFR China price of methanol in October was at its highest level since January 2017.

But in the petrochemicals sector I follow most closely, polyolefins, there have been more downstream closures of plastics converters than upstream losses of polyethylene (PE) and polypropylene (PP) production.

This 85% often comprises monomers produced from world-scale steam crackers and propane dehydrogenation plants. These plants have great economies of scale.

China is trying to grow rather than shrink this type of petrochemicals capacity. Modern, world-scale petrochemicals plants are exactly the type of manufacturing facilities China wants more of, as they fit perfectly with efforts to escape the middle-income trap. This is especially the case if these plants focus on making higher-value grades of polymers.

These big plants are usually located in chemicals industry parks that are often away from big population centres, and so represent less of a pollution threat. And because they are very modern, they have good pollution-control measures.

Not so some of China’s smaller plastic converters – hence, the converters are being fined and shut down because of their weak control over emissions.

Many smaller fabricators are also being forced to close permanently for the economic restructuring reasons detailed above. This has resulted in a fall in in PE and PP demand.

This explains why I am forecasting declines in PE and PP pricing in China in November and December despite considerably higher naphtha costs on higher crude prices. I then expect pricing to pick up in January a bit on stronger seasonal demand before dipping again in February and March.

Hence the significance of the chart at the beginning of this blog post. It shows that HDPE producers have started to lose pricing power:

Here is an important note: Now that the 19th National Party Congress is out of the way, China is accelerating its whole economic reform programme.

What you have just read is obviously the immediate implications for only two few value chains. Every chain will be different and market conditions will consistently shift across all of these value chains.

Let’s again take polyolefins as an example of conditions might shift. Many market participants assume that once the shake-out in smaller processing capacity is completed, sometime early in 2018, then the lost resin orders lost will be quickly compensated for by more demand from the big, modern fabricators. In other words, there will be no net loss of demand.

But this also depends on how the overall economy performs. What if China’s economic reforms don’t work? How will this effect polyolefins consumption growth?

Here are two other examples of petrochemicals value chains that have been disrupted by the environmental campaign. This underlines the scale of today’s disruptions: 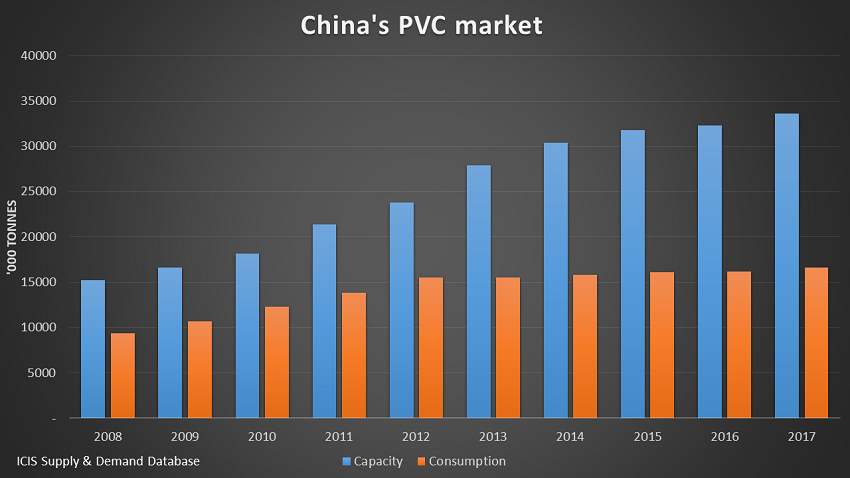 Consider my second chart, which you can see above. It shows that China’s polyvinyl chloride (PVC) capacity will have risen by 120% between 2008 and the end of this year. Demand will be up by 80%. This explains why average operating rates will remain in the abysmally low 50% range throughout these years.

Also – and this is why I picked PVC as an example as opposed to other more oversupplied petrochemicals and polymers in China – 80% of the vinyl chloride monomer used to make PVC in China is made via coal. This is the carbide route  as opposed to the ethylene route.

As China carries out its battle against coal as a chemicals/energy source we might see lots of the smaller carbide-based plants shut down.

But here is the complication: These smaller carbide-plants are a crucial source of jobs in western, poor China. China needs more rather than less jobs in its economically disadvantaged provinces as tries to narrow its income divide. How will China’s president, Xi Jinping, go about squaring this circle?

PREVIOUS POST China's Polypropylene Market: The Right Questions You Simply Must Ask
NEXT POST How US Could Be Squeezed Out Of Europe's Polyethylene Market