How US Could Be Squeezed Out Of Europe’s Polyethylene Market 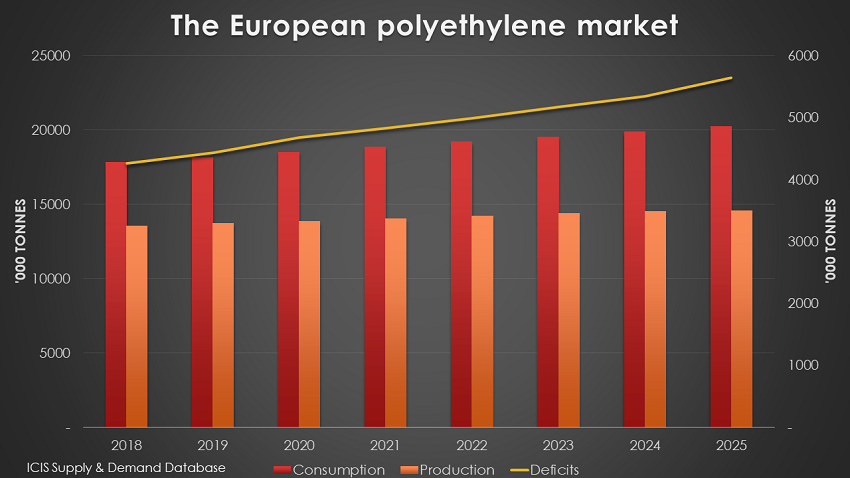 EARLIER this year a commonly held view was that globalisation would slip into reverse gear with the very real prospect of a global trade war.

But this view didn’t take into account China’s One Belt, One Road (OBOR) initiative, the launch of which predated the election of Donald Trump as US president by some two years.  The OBOR has always been about creating the world’s biggest free trade zone, regardless of what happens elsewhere in the World.

In its widest definition, it will account for 40% of global GDP and 65 countries, according to the World Bank. Quite stunning, and despite my many blog posts on this subject, it remains a largely ignored and badly understood force in reshaping global chemicals trade flows. Several of the very senior chemicals industry executives who attended a recent speech I gave had never even heard of the OBOR.

So, in fact, the election of Donald Trump didn’t signal globalisation going into reverse gear. It instead meant that China had taken over as the country driving progress towards more global free trade.

Agreed, the election of President Trump had created the chance of a global trade war. But it looked as if that war was going to be between the US, China and the rest of the OBOR. In other words, the US was at risk of finding itself in very damaging geopolitical and economic opposition to the world’s biggest-ever trading bloc. To put more succinctly, it was at risk of isolating itself from 40% of the global economy.

What’s changed since earlier this year is that countries both outside and inside the OBOR, excluding the US of course, are pressing ahead with free trade deals independent of the OBOR initiative:

I’ve discussed in earlier posts how the OBOR, in its existing form, might reshape global chemicals and trade flows. Now let’s take this analysis a step further, taking into account these new developments in free trade.

An increasingly isolated US?

Take a look at the above chart. Behind China, Europe is the second biggest deficit region for polyethylene (PE). And of course PE is the polymer where the biggest battle for market share is about to take place because of the rise of US capacity.

Europe is a low growth market. We expect its PE consumption to grow by an average of just 2% per year between 2018 and 2025. But because of lack of growth in local production, its import requirement will rise from 4.3m tonnes in 2018 to 5.7m tonnes in 2025.

If you only analyse cost-per-tonne economics, the US should have no problem placing big new volumes in the US market because of its feedstock advantage. This could force the closure of older, less efficient European cracker-to-PE plants, whilst also squeezing-out imports from elsewhere.

And as I’ve discussed before, reports of the death of European crackers have been greatly exaggerated. Lower oil prices have revived naphtha cracking, and nearly all of the European crackers are fully depreciated even if they have significant reliability issues.

Imagine, though, that this goes a step further. What if US PE exports end up being disadvantaged by import tariffs because of new trade deals between the US and countries and regions such as Canada and the Middle East? This could make it a lot harder for US producers to export to Europe. This could be regardless of the fact that several of the major players in the European PE industry also own assets in the US.

I must again stress that none of this is meant to express an opinion on President Trump’s approach to global trade. But nobody can sensibly question that the president’s approach to free trade is a break with the US past. With change always comes risks. And so far at least, his focus on bilateral rather than multi-lateral trade deals has made little progress.

All of this might change, of course. President Trump might end up reshaping the global trading map to the advantage of the US, resulting in better rather than worse access for US chemicals and polymers producers to overseas markets. But sensible scenario planning involves building a scenario where the opposite happens.