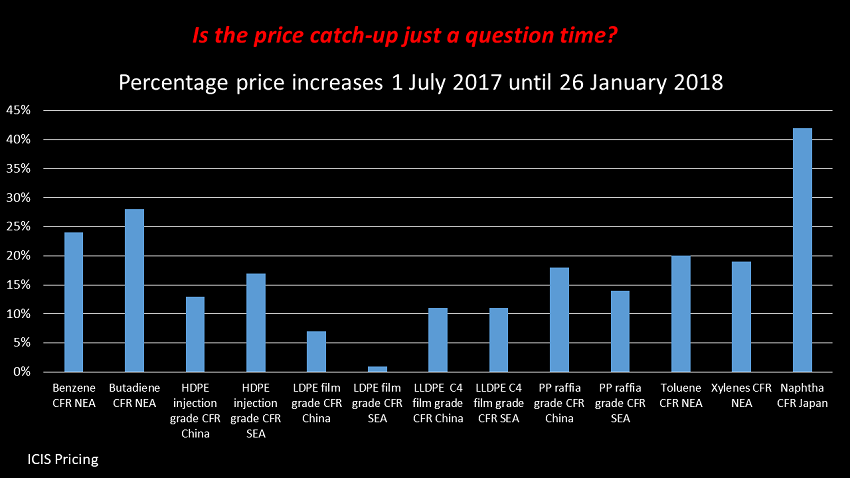 NOBODY knows how many tonnes of un-cracked naphtha are sitting in steam cracker storage tanks around the world compared with H1 of last year.

Or how much plastic resin and rolls of plastic film are being held in storage by converters. Or how many car dashboards are in the warehouses of auto companies, waiting to be assembled into finished vehicles.

But what we can say with certainty is that global raw materials inventories are higher, with stocks having steadily increased from July 2017.

From that month onwards, purchasing managers up and down all the petrochemicals value chains started asking their CFOs for extra cash to buy raw materials. This was of course an attempt to hedge against further increases in oil prices.

Tying-up extra working capital might end up not being a problem if we are in the midst of a strong, synchronised global economic recovery.

This is certainly the conventional opinion out there. Every time you type a common search term into Google these days, such as ‘global economy” or “Chinese economy”, the overwhelming number of the news items that leap into your view are positive.

Many conversations I have had with petrochemical companies, plastic converters and a few retailers over the last few weeks have also been of the same mood.

I worry that some people have forgotten a golden rule of all oil-market bull runs, such is the confidence out there.

Some demand is always apparent at times like this. Apparent demand is inventory sitting in storage up and down manufacturing chains because of the process I have just described. Stock building always happens, even during the strongest periods of economic growth.

It seems to me, though, that higher petrochemicals sales volumes are being viewed as almost entirely representing real demand.

The above chart – an updated and more comprehensive version of the one I ran last Friday – shows that since July 2017, petrochemicals pricing hasn’t risen in line with higher naphtha costs. On average, the prices listed are up just 15% versus a 42% increase in naphtha.

If the global economy was as strong as conventional wisdom indicates, why hasn’t petrochemicals pricing increased in line with naphtha? Shouldn’t the increases in pricing actually be ahead of higher naphtha costs?

Is this just a question of time? Or does the American Chemistry Council (ACC) data on global operating rates point to the real, underlying state of the global economy?

Global overall chemicals capacity utilisation was at just 81% in November, according to the ACC. This was the second lowest November reading on record, and the 2009-2016 average operating rate was well below that for 1987-2008.

This suggests a secular decline in demand. I believe this is the result of ageing populations, with sustainability another threat  to petrochemicals consumption – especially polymers.

The risk from crude

Strong oil prices are seen as a reflection of the OPEC supply cuts, geopolitical disruptions and the booming global economy.

But what if today’s rally is mainly the result of the production cuts and financial speculation, which has been fuelled by huge volumes of cheap credit? What if real demand growth is, in fact, slowing down?

Fellow blogger Paul Hodges argues that hedge funds have added some 1.4bn barrels of long positions in oil and oil products since June 2017 whilst shorting the dollar. This represents 15 days of global demand.

Hodges writes: The hedge funds didn’t buy 15 days-worth of oil to use it.  They bought it to speculate, with the OPEC-Russia deal providing the essential “story” to support their buying binge.

If oil prices were to see a significant decline we would see a destocking process. This would reveal the extent of the gap between apparent and real demand for petrochemicals, plastic film and car dashboards etc.. Petchem companies would also be left holding over-priced raw material inventories and stocks of unsold petrochemicals and polymers.

What happens in March during the refinery maintenance season when the physical demand for oil will fall? And/or what happens to all this speculative money when the coordinated withdrawal of central bank stimulus starts to really take effect?

PREVIOUS POST How To Replace Billions Of Dollars Of Polymer Sales Lost To New Recycling Rules
NEXT POST China Accelerates Pollution Campaign In 2018: Implications For Chemicals