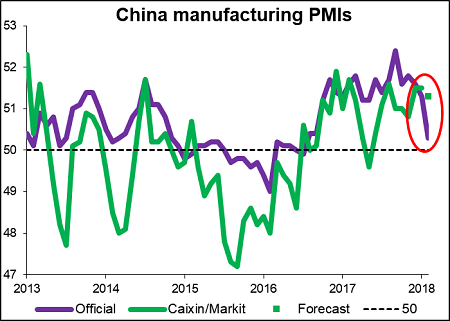 THE CHINESE economy remains one of the most overlooked threats to the conventional opinion that we are in the midst of a synchronised global economic recovery.

The private Caixin PMI for February did in contrast edge up to a six-month high. But the scale of the official PMI decline and the fact that it was also at a 20-month low suggest that a slowdown is already under way. Forward indicators have for a while also indicated that the Chinese economy is cooling off. These include the Capital Economics China Activity Proxy.

Nearly all the commentators seemed to miss the message behind the decline in the official decline: That economic reforms are once again accelerating following the “Li stimulus” period. This will become even clearer during this week’s National People’s Congress – China’s annual parliamentary meeting.

Some of the PMI’s decline was down to the timing of the Lunar New Year Holidays. But I believe that the dip was also the result of the collapse of shadow bank lending in January. January 2018 shadow lending was 90% lower than the same month last year.

What was also very significant was that January 2018 shadow lending was back at the level of January 2009. This was before China’s huge economic stimulus package was properly under way. In other words, China has returned to the level of speculative, high risk finance that was typical before the launch of the package.

High risk finance has allowed zombie factories in oversupplied industrial sectors, including in some chemicals, to carry on operating. Xi and his fellow reformers are closing these factories down by starving them of capital.

Xi is prepared to accept the economic pain of shutting factories down. For example, from 2015 up until November of last year, 1.5 million jobs had been lost in the steel and coal sectors from a target of a 1.8 million reduction by the end of last year.

Getting rid of non-worldscale chemicals and other plants in oversupplied sectors is linked to the environmental clean-up campaign. Many of the plants being shut down are also heavy polluters.

This leads onto another reason for the fall in the PMI – the winter clean air campaign which is due to end in March. The closure of factories to improve air quality in 28 northern cities resulted in lower-than-expected industrial activity in February.

But as with the battle against shadow lending and manufacturing oversupply, the environmental campaign will continue and will very probably intensify. I made this argument in early February. This view was supported by a UBS report  that was released last week.

The environmental clean-up will continue to create great opportunities for chemicals exporters to sell extra volumes in China. Profit margins for both overseas and local producers in China in certain value chains will likely remain at historic highs because of the shutdown of plants for environmental reasons.

But that’s separate and less important story. The bigger story and so bigger priority for chemicals company board members is building scenarios where the Chinese economy slows down this year.

Crucially, also, there could be a transmission mechanism where events in China combine with what is taking place in the West. China is withdrawing stimulus just as Western central banks also ease back on economic stimulus and raise interest rates.

It is possible that the slowdown will be very minor in 2018 – just a few percentage points off 2017 GDP growth. And it might be short-lived as Chinese government spending on reducing the rural-urban income gap boosts the economy in H2.

But even a moderate Chinese slowdown could be enough to upset the global economic apple cart. I maintain that the whole notion of a synchronised global economic recovery is built on a house of cards.

Alternatively, the slowdown will drag on throughout this year and into 2019. There is a risk that China loses control of events and suffers a financial sector crisis because of its high level of bad debts. This risk is out of fashion. Just because debt crisis is out of fashion doesn’t mean it should be ignored.

The risk of a global trade war  has also increased over the last few days. This would of course have major negative implications of for the Chinese economy.

PREVIOUS POST US Import Tariff Decision: Impact On Polyethylene And The Global Economy
NEXT POST China And US On Collision Course As Trade Tensions Build