Plastic Waste Crisis: Virgin Polymers Growth Will Be Below GDP 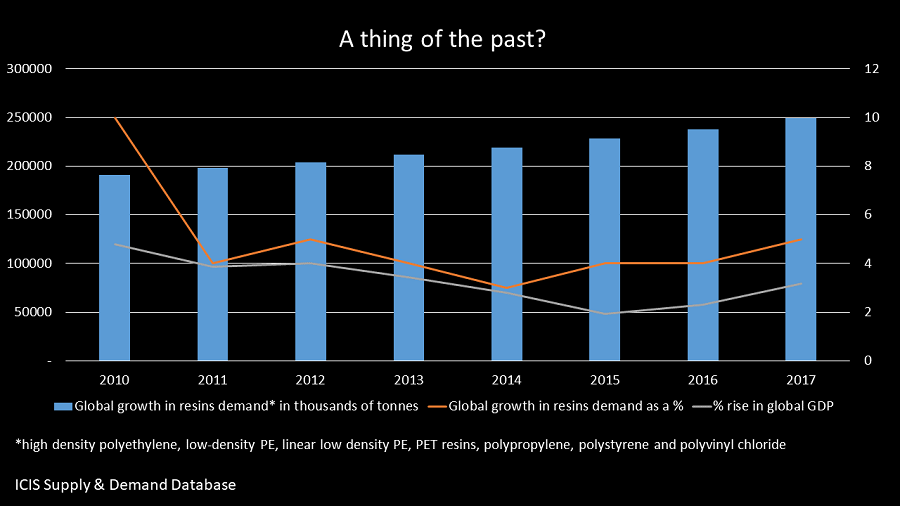 AS the demand for transportation fuels declines, oil and refining companies are increasingly viewing petrochemicals as compensation for this lost demand.  Their logic is based on the theory that whilst gasoline and diesel consumption is set to fall on sustainability concerns, petrochemicals growth will remain strong.

The companies have of course tremendous upstream advantages from ownership of oil reserves through to the liquid feedstock for petrochemicals that come from refining. And with transportation fuels consumption on the decline, existing refinery assets may increasingly be reconfigured to supply advantaged feedstock to petrochemicals.

Saudi Aramco is a going a step further with its plan to build a grassroots refinery in either Yanbu or Al-Jubail in Saudi Arabia that will be dedicated to converting oil into petrochemicals feedstocks. Aramco plans to use its proprietary technology to convert 400,000 bbl/day of crude into around 9m tonnes/year of petrochemicals and base oils. This would be the world’s largest fully-integrated oil to chemicals complex.

Aramco has also announced over the last few weeks plans for a new mixed feed cracker and aromatics complex next to its Motiva refinery in Houston, Texas.

Total and Aramco have disclosed a “giant” cracker and derivatives project downstream of their joint venture SATORP refinery in Al-Jubail. The cracker would be fed by liquid feeds and off-gases from the refinery.

The last few weeks have also seen Aramco further cement its $7bn investment in the RAPID project at Pengerang in southern Malaysia.

And in March, Shell announced that it will invest $3-4bn a year in capital spending on chemicals until 2025.

This promises to radically reshape the petrochemicals environment.

The logic is sound enough if you take a look at the chart at the beginning of this blog post, which is another example of the wealth of excellent data in our ICIS Supply & Demand Database.

As you can see, growth in resins demand has exceeded GDP in every year during this period, largely thanks to China. And extending this period out further – from 2000 until 2017 – global resins growth averaged 4.3% as against a 3.7% rise in GDP

Our base case is for  stronger global consumption growth over GDP in each of the years from 2018 until 2025. But this assumes a business as usual outcome. I believe that demand for virgin synthetic resins is likely to be below GDP on sustainability pressures. Contact us at ICIS Consulting to model this scenario for your business.

I believe we have gone beyond a point of no return where public opinion has turned against single-use plastics. Not all the applications of the six resins are of course single use, but there is a sufficient percentage of “throwaway” end-uses to push growth in the resins below the expansion in GDP from now until 2025 – and beyond. The shift in public opinion will lead to wave after wave of legislation that restricts the use of virgin polymers.

The brand owners, are of course very close to public opinion. They have as a result already responded to the sea change. Eleven major brands, including Coke, Unilever, Wal-Mart  and Pepsi – responsible for 6m tonnes of plastic packaging a year – are committed to using “100% reusable, recyclable or compostable packaging by 2025“.

And take note of these words from James Quincey, CEO of Coca-Cola, on the announcement of their new recycling policy:

If left unchecked, plastic waste will slowly choke our oceans and waterways. We’re using up our earth as if there’s another one on the shelf just waiting to be opened. Companies have to do their part by making sure their packaging is actually recyclable.

As I said at the beginning, the oil-to-refinery majors are in an excellent position to provide cheap feedstocks for petrochemicals production.

But what if legislators begin to charge petrochemicals producers for externalities – the cost of the environmental damage caused by plastics pollution? How will that effect the economics of petchems production? The Ellen MacArthur Foundation in a 2015 study wrote:

As I discussed last week, legislation will require companies to monitor the life cycle, the environmental footprint, of every plastic pellet that they produce. No longer will their legal and ethical responsibilities end at the polymer factory gate.

These responsibilities will involve ensuring that each plastic pellet they produce is either re-used, recycled or converted into transportation fuels and naphtha. Financial penalties will be levied for every pellet that ends up being dumped into rivers or oceans – the externalities referred to by the Ellen MacArthur Foundation

Making A Success of Sustainability

The oil-to-refinery majors are likely to have such major feedstock advantages that they should be able to comfortably to absorb the cost of externalities.

Their challenge will instead be demand rather than cost. Will there be sufficient demand for virgin polymers to justify all their investment ambitions?

The most vulnerable companies could be the polymer players with no access to their own hydrocarbon reserves and little or no presence in either oil refining or natural gas processing – a new definition of “standalone” polymer producers. They operate steam crackers and styrene plants etc., but this level of upstream integration may in the future be insufficient to guarantee competitive advantage.

The standalone players will be exposed to fierce price competition from those with better upstream integration, as everyone fights for what I believe will be lower growth in virgin polymers. And could virgin polymers go backwards? What are the prospects of ex-growth – i.e. shrinking demand?

There is a way forward for standalone players and that is to be service-led, to focus on innovative solutions to the sustainability challenge.

More money will have to be spent on R&D to redesign how polymers are used in single-use applications. Competition will be fierce from paper and aluminium producers who will fight to win market share in packaging. The key to success will be successfully partnering with the brand owners.

And for the standalone producers, there is another great opportunity which I already referred to above: Making use of waste plastic as a new feedstock source through investing in pyrolysis plants that break down discarded plastic into transportation fuels and naphtha.

Equally, of course, those with the upstream advantages have to pursue the same direction because of public and legislative pressures. Assuming that feedstock advantage alone will ensure success is too risky, in my view.

A challenge for petchems companies in general is that they are several steps away from the final consumer. Adding to a feeling of remoteness is that we can sometimes see ourselves as misunderstood and hard to understand because of the very technical nature of what we do.

We have to get over these barriers if we are to respond in the right way to the plastics waste crisis. The positive flip side of the coin is that this industry is full of incredibly bright people with the technical skills to solve this crisis.