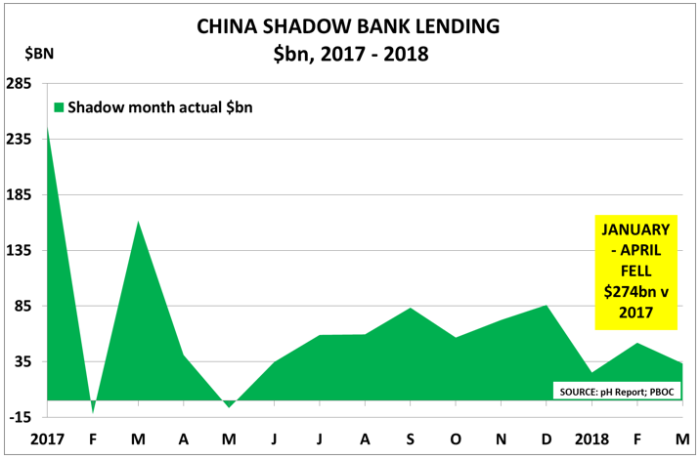 FAR too little attention is still being paid to China’s lending data even though this has long been the key measure of whether its economy is accelerating or slowing down.

In January 2014, lending in China started to slow down as China’s recently appointed president, Xi Jinping, exerted his authority. At that stage, he was pressing ahead with economic reforms, a major element of which was reducing financial risk from excessive leverage.

But it wasn’t until September of that year when the consensus view was reached that China was slowing down when, in fact, the slowdown had, as I said, been under way since January. It was from September of 2014 that we of course saw the collapse of commodity prices, including oil prices, partly because of the acceptance that China’s economy was cooling down.

Xi and his Princeling pre-reformers then temporarily lost control of events as the Populists, led by Prime Minister Li Keqiang, regained control. This led to the strong rebound in economic growth in 2016 and 2017. Short term stimulus policies at the expense of essential long-term economic reforms took priority.

History is now repeating itself. Most commentators, though, continue to overlook the lending data.

Take a look at the above chart, which is an update of the chart I’ve been running since the start of this year. It shows shadow bank lending, which is lending via the highly speculative and so very risky private banks. Shadow lending was down by 64% in RMB terms in January-April of this year over the same period in 2017. In dollar terms, this represents a $274bn decline.

As fellow blogger Paul Hodges and Hong King-based investment bank Daniël de Blocq van Scheltinga note in this FT BeyondBrics blog post, some of this decline in lending has been compensated for by a rise in official lending, via the state-owned banks.

But they add that total social financing (TSF) was also down by 14% year-on-year in January-April 2018 – $110bn lower. TSF is lending via both the shadow and state-owned banks. In other words, the total availability of credit is substantially down so far this year.

Most commentators are staring into the rear-view mirror because they haven’t been tracking the lending numbers. They are thus only now pointing to other economic data that confirm the impact of slower lending growth.

For example, property sales growth fell to 1% in the first four months of the year compared with 8% cent growth during the same period last year. In April real estate sales dropped by 4% from a year earlier.

April also saw fixed asset investment grow at the slowest since 1999, whilst the pace of retail sales softened to a four-month low.

China’s polyolefins markets have been telling us since the end of the Lunar New Year Holidays (LNY) on 21 February that a slowdown is under way:

The period immediately after the LNY is normally a peak season for polyolefins consumption. But what has held demand and pricing back has been the lack of availability of credit amongst the smaller plastic processors because of the slowdown in lending growth.

Moderately lower GDP growth or something much worse

Hopefully, this will be a very well managed and so moderate economic slowdown. A moderate slowdown would represent official 2018 GDP growth close to 6.5% – the government’s target. Whilst this would be sharply down from last year’s actual official GDP growth of 6.9%, 6.5% would still be extremely healthy.

For the polyolefins producers, would they even notice the difference? Whilst demand and pricing has been disappointing since the end of the LNY, the full year 2018 may turn out to be very good, even if official GDP growth does fall to 6.5% (with unofficial growth likely to be significantly lower).

Two strong positive factors for the year as a whole are:

But do not rule out the chance of a global economic recession. The increasingly unpredictable behaviour of the White House continues to threaten a trade war with China, and with other major US trading partners.

Meanwhile, keep a close eye on Chinese lending data. Will Xi reverse course if economic conditions significantly deteriorate through allowing shadow lending and TSF to take off again? I think not, as he is determined to complete essential economic reforms.