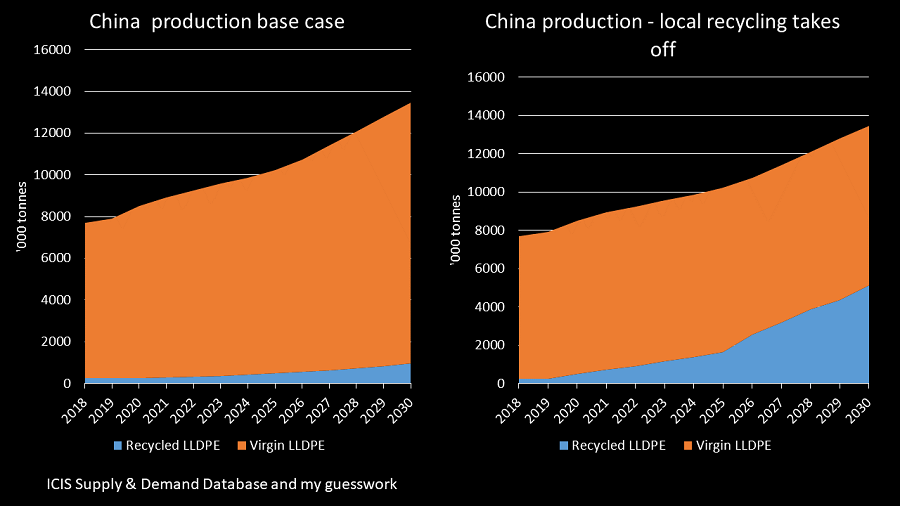 IT just isn’t logical. There is a lot of excitement in polyethylene (PE) markets about how China’s heavy restrictions on imports of scrap plastic will deliver a permanent boost to imports of virgin PE resins.

But plastic waste is in the long term plastic waste, regardless of where it comes from. Sure, the immediate priority is dealing with the grave health issues of workers in Chinese coastal towns and cities who used to handle huge volumes of contaminated imports of plastic and other waste from the West, and this will undoubtedly benefit virgin PE resins demand in 2018 and 2019.

Let’s therefore separate the short term benefits for importers from the long-term challenges.

We can already see the benefits in Q1 2018 import statistics. Overall PE imports rose by 11% to around 3.4m tonnes compared with the same period last year, as plastic processors were forced to switch to virgin from scrap PE.

There is also talk, although nobody seems to be clear about the details, of a complete ban on imports of scrap PE next year. The restrictions introduced from 1 January 2018 do not amount to a complete ban as sorted, baled scrap plastic with contamination levels of less than 0.5% per tonne can still be imported.

Nevertheless, the drop in official PE scrap plastic imports so far this year has been huge. Approved import volumes for 2018 of PE and some other categories of waste plastics are just 2,595 tonnes compared with 2.6m tonnes last year.

Anecdotal reports suggest that smuggling of scrap plastic has increased because of the rise in oil prices.

But the second round of “Blue Sky 2018” campaign, which took place in early April, led to 110,000 tonnes of solid waste in general being seized by customs officials as smugglers tried to move these tonnes across the Chinese border, according to official government data. The tone of recent articles in the state-owned media also suggests that Beijing is deadly serious about cracking down on smuggling on overseas waste.

It is not just the ban on scrap PE imports that is benefiting virgin resins consumption, but also the ban on imports of scrap cardboard.

Imported scrap cardboard was used to package goods sold over the internet by Alibaba and Tencent etc. The internet sales companies have been forced to switch to expandable linear low density PE (LLDPE). This helps to explain why LLDPE imports rose by 27% in Q1 to 1m tonnes, again on a year-on-year basis.

Internet sales in China grew by a staggering 32% in 2017 over 2016 to more than $1 trillion. But sales growth may not be as strong this year because of the steep drop in credit availability that will lead to a moderate economic slowdown in the best-case scenario.

As a reminder, the upshot of all the above is that we expect 2018 PE consumption in China to be 600,000 tonnes above what we had assumed before the scrap plastic restrictions were introduced. This would raise this year’s consumption to around 30.4m tonnes. Note, though, that this assumes 6.7% GDP growth whereas this year’s GDP growth might fall to around 6.5%.

By long term I mean from 2020 onwards as China modernises its local-for-local plastic recycling industry. Right now, the industry is highly fragmented and inefficient. Plastic rubbish is often collected by migrant workers on bicycles in the big cities, and is then delivered to small scale, inefficient, and sometimes unlicensed, recyclers.

But it seems likely that Beijing will invest heavily in its local-for-local recycling business for the following four reasons:

Just taking LLDPE as an example, as such a large percentage of LLDPE goes into single-use applications, this finally get me round to the charts at the beginning of this blog post.

On the left, you can see our base case. This assumes that of China’s total LLDPE production, recycled material will comprise 3% in 2018 – 250,000 tonnes. Perhaps this overstates the likely volume because of the restrictions on scrap PE imports. But by 2030 we see this only rising to 960,000 tonnes – 7% of total production.

You need scenarios where beyond 2019, local recycling takes off, supported by billions of dollars of government investment, for the reasons I’ve given above. You need to build these scenarios through good teams on the ground in China that spend as much time looking at the recycling sector as they now spend studying the virgin resin market. This should also apply to your global business.

So, for argument’s sake, and this is of course pure guesswork, let’s imagine what virgin resins production would look like if the recycling sector ends up meeting around a third of total required LLDPE production by 2030 (see the graph on the right) – 5m tonnes.