China 25% Tariffs On US PE Imports Extended To All HDPE, Nearly All LLDPE 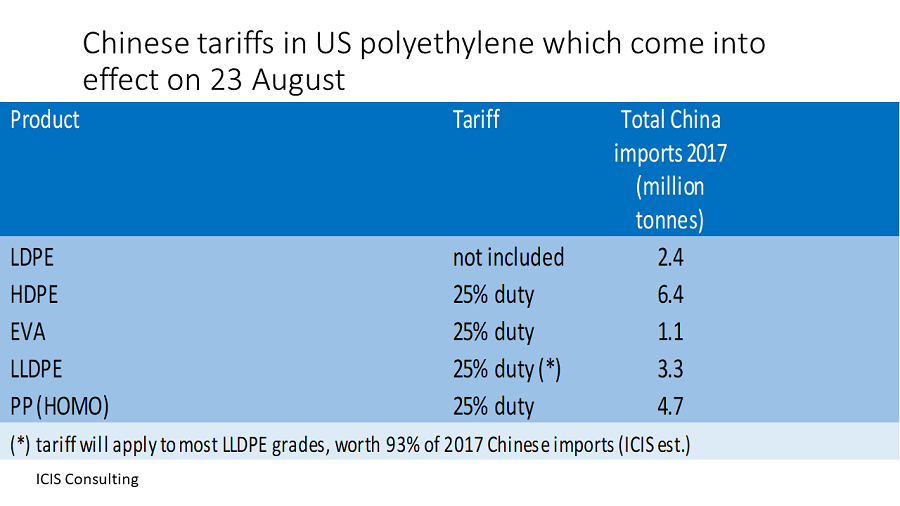 I will confine my comments today to the impact on PE markets as the effect on EVA and PP markets will be less significant.

Don’t say you haven’t been warned. I’ve been arguing since 2016 that this could well happen. And as recently as last Friday, I flagged up my concerns that the US and global PE industries were underestimating the risks that China would extend its range of tariffs against US PE.

This new list of tariffs against US PE overrides an earlier list that included low-density PE (LDPE) and just a small percentage of grades of LLDPE. US exports of these LLDPE grades to China only amounted to 0.4% of last year’s total US LLDPE production.

The minor good news is that US LDPE will no longer face Chinese tariffs. But the far bigger deal is that all of US HDPE and a big majority of LLDPE will be covered by tariffs.

You may, of course, disagree with what follows, and I very much hope I am wrong. But my view is that this could be nothing short of a hammer blow to the US industry, as it is in HDPE and LLDPE where the vast bulk of US capacity expansions are taking place:

The chart below on HDPE and LLDPE  is a reminder of why access to the China market is so important. In the latest updates in our Supply & Demand Database, we estimate that China will account for 51% of net HDPE and LLDPE  deficits (imports minus exports) across the major deficit regions and countries in 2018-2025. 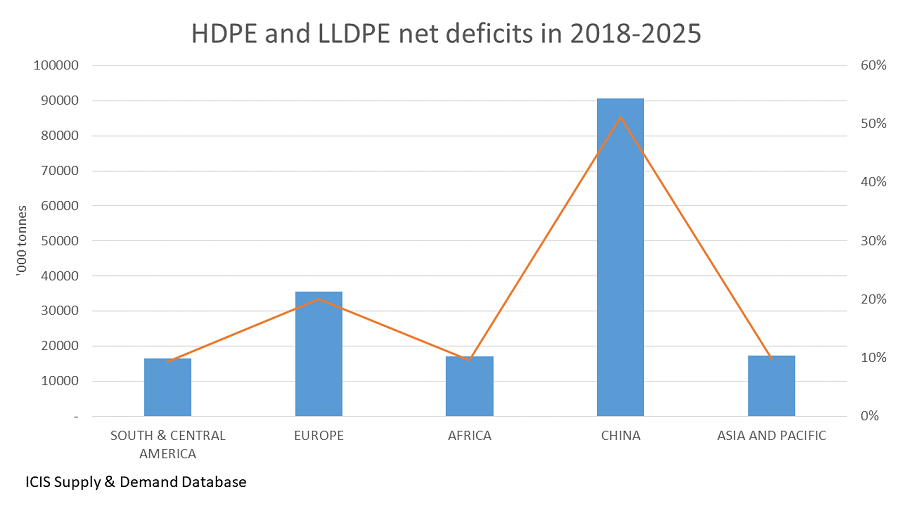 Five doesn’t seem to be able to go into four. The 25% tariffs, which are due to be introduced from 23 August, could make it economically unviable for the US to export to China with the other PE import markets too small to comfortably absorb US surpluses.

It is also worth noting, before we return to the subject of the specific impact on PE markets, is that the extension by China of tariffs to cover must US PE imports is another example of clever targeting.

Earlier in the week, I discussed new Chinese tariffs on methanol and liquefied natural gas. China earlier announced plans to levy duties on US crude. Combine this with tariffs on US agricultural exports and China is aiming its trade war at the main source of the US economic recovery, along with the regions of the US that strongly support President Trump.

Back to PE markets. US producers may face a choice of either delaying start-ups and turning down production at plants that are already operating, or pushing ahead with expansions at the risk of causing significant oversupply in smaller import markets.

If US start-ups and production plans remain unchanged how would producers in these smaller markets react? Might they seek their own form of protection from US imports as local margins come under pressure?

There is an argument to be made that some US PE producers will stick to their existing production schedules because of the need to get rid of ethane. Upstream natural gas producers have to take ethane out of methane before the methane can be placed into pipelines, with steam cracking the only end-use market for ethane. Supply of ethane has surged in the US because of the shale gas energy revolution.

The US needs China more than China needs the US

What about all of this from the Chinese perspective? Over the last ten years, China has significantly reduced its dependence on US imports of HDPE and LLDPE as imports from the Middle East and Southeast Asia risen in importance or have held steady

There is another scenario, and one that I very much hope comes true, where either or both sides in this trade war blink and back down. The tariffs might thus either never go into effect or could only stay in place for a very short while.

One reason to believe that this will happen is that President Trump’s efforts to win trade concessions  from China play well with his core supporters, and the November mid-term elections are of course very close.

BUT, President Trump has held his views on trade for a long time and they a core part of his America First strategy. Meanwhile, China cannot agree to the key US demand in trade talks which is that it winds back its Made in China 2025 programme. The programme has to go ahead if China is to escape its middle-income trap and thus secure its long-term economic prosperity.

This looks like two trading partners with non-negotiable positions. The end-result might be an escalation of the trade war and a new global recession.

We all hope that this doesn’t happen. But hope is not a planning strategy. PE producers, if they haven’t done so already, must a.) Immediately start planning for a significant retreat in margins as US volumes displaced from China arrive in other smaller markets, and b.) Plan for what a global recession would do to PE demand.