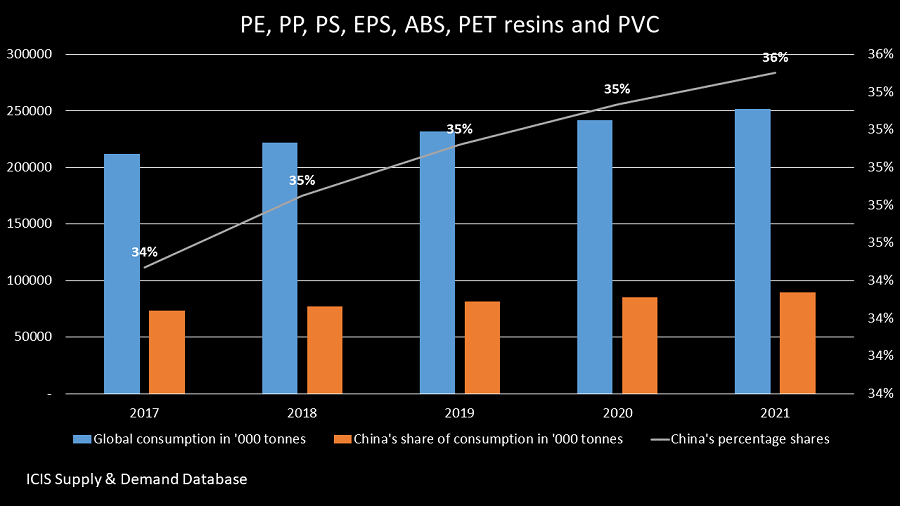 THERE is no other country or even region in the world that comes anywhere close to being as important to the global polymers industry as China, as the above chart reminds us.

From end-2017 until the end of  2021 in seven of the major synthetic resins – PE, PP, PS, EPS, ABS, PET resins and PVC – we forecast that China will account for an average of 35% of total global consumption.

And crucially for anybody planning new investments in any of these products, China will also account for 41% of growth during the same years.

Within the average data lie some more extreme exposures to economic events in China. For example, in ABS, our base case expects that China will drive 58% of total global consumption and 70% of growth.

The percentages on PE on an uninformed first glance don’t seem quite as alarming. We expect that China will be responsible for 29% of global consumption and 36% of growth.

But Chinese PE growth has to remain at least as strong as we expect (very likely it needs to be stronger) if the big new capacities being added by the US are going to be absorbed without major market disruptions.

Anyone involved in any these seven polymers – and indeed in every other petrochemicals and polymer where the overreliance on China is very similar – should therefore be concerned about yesterday’s IMF warning regarding China’s GDP growth.

Reasons to be gloomy

The IMF has cut its 2019 GDP growth forecast for China by two percentage points to 6.2%. And it is warning that next year’s economic growth in China could be a full percentage point lower than this – at 5.2% – if the US/China trade war intensifies.

All the signs are that the trade war will intensify. For example, the FT reports that “the Trump administration is seeking to stop the EU, UK and Japan from striking separate trade deals with China as it tries to impose economic isolation on its Asian rival.”

The recent successful revamp of NAFTA, a revised US/South Korea free-trade deal and US efforts to reach new trade deals with the EU and Japan also suggest that the White House only wants one fight at a time – with China.

Sentiment in China’s polymers markets has already been dampened by the trade war, with sentiment turning markedly worse from 24 September onwards.

On that date the US imposed 10% import tariffs on a wide range of Chinese plastic products, and it seems very likely that the US will go ahead with increasing the tariffs to 25% on 1 January next year.

China plastics industry players forecast that 2.6m tonnes of annual plastic products demand will be lost as a result the tariffs. Sixty seven percent of plastics products demand is accounted for by products made from polyolefins.

The trade war gathered pace in Q2 this year as China’s economy was already under downward pressure from efforts to reduce bad debts and clean up the environment.

Lending via China’s high-risk shadow banking system was $603bn lower in January-August this year compared with the same months of 2017. Total social financing, which is lending from both the shadow or privately-owned banks and the state-owned banks, was down by $224bn.

Credit via the shadow system is now back at levels before 2009. Why this year matters is because it was when China launched its huge economic stimulus package to counteract the impact of the Global Financial Crisis.

Polymers and petrochemicals demand has benefited enormously from economic stimulus. Take that stimulus away and demand will contract.

The environmental clean-up has been stepped up this year through more inspections of factories. The number of factories shut down temporarily and permanently because of failure to meet pollution standards has increased.

Evidence of the impact of the inspections can be seen from our latest estimate for PP production in 2018.

We had expected China’s output to rise to 23.5m tonnes from 21.8m tonnes last year. We now expect this year’s production will only reach 22.7m tonnes because of increased inspections leading to PP operating rates cuts and delayed start-ups of new plants.

But China’s PP markets haven’t tightened as a result of less-than-expected local output. This has been cancelled out by the increased number of plastic processors that have been closed-down by the environmental inspectors.

Preliminary evidence from incomplete trade data suggests that there may have been a decline in PP imports this year – perhaps further evidence of a weak Chinese PP market.

But we cannot be certain because for some unknown reason, China hasn’t published any official trade data since March.

Reasons to be cheerful

The Chinese government last week announced that levels of particulate matter of 2.5 microns (PM2.5), a standard for measuring air pollution, must now only be cut by 3% during the winter compared with the previous target of 5%.

Local authorities have also been given more leeway to decide for themselves whether to apply pollution-reduction requirements during winter, when air quality tends to deteriorate.

These decisions should result in lower lost industrial activity and so better economic growth.

Another reason for relaxation of the pollution rules is preventing the natural gas shortages that occurred last winter, when coal-fired boilers were shut down.

Chemicals and other plants had to be closed as local governments cut off their gas supplies in order to reduce shortages for domestic heating.

China this week announced a cut in the reserve requirement of its banks. This is the percentage of reserves that banks have to hold against their loans, so the lower the percentage the greater their ability to lend.

The reduced reserve requirement is expected to inject an additional $109bn of credit into the Chinese economy.

This decision, along with earlier financial easing measures, will help to counteract the sharp fall in lending availability via the shadow banks.

More infrastructure spending is also being planned in a further attempt to bolster GDP growth. 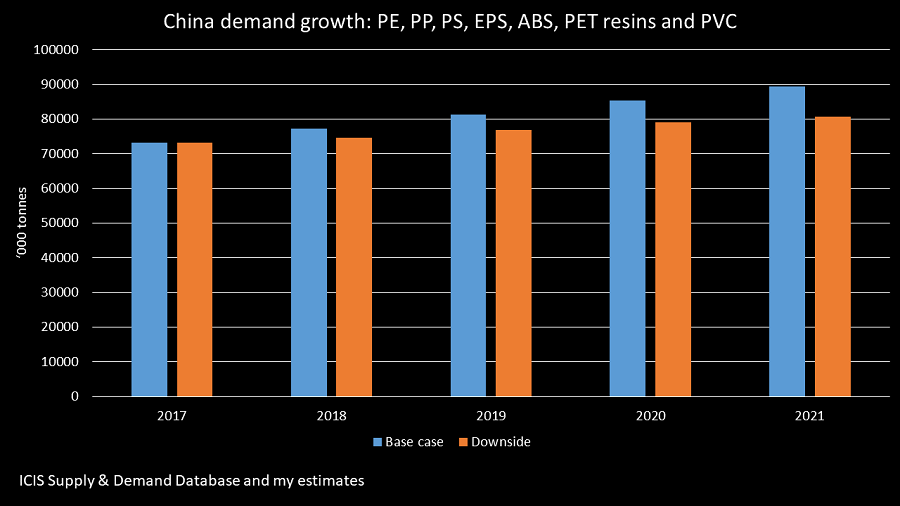 But can China stop its GDP growth falling to as low as the IMF downside prediction of 5.2% on 2019 if the trade war gets out of control? And what if growth is then lower than expected in 2020 and 2021?

I believe there is every chance that the trade war will get out of control because of the long-term mission of President Trump and his advisors.

They want to redraw the geopolitical as well as economic map in favour of the US, China will not able to concede ground – hence, a significant chance of a new Cold War.

The above chart is an attempt to estimate the negative impact on Chinese growth in PP, PS, EPS, ABS, PET resins and PVC demand. What you can see is the following:

This 8.6m tonnes of lost consumption growth wouldn’t be the end of the story. China’s economy is far from being an island as it is course hugely important for the global economy.

The economies of the Asia and Pacific region would in particular be vulnerable to a China slowdown because of intricate and extensive trading connections with China.

A China slowdown would obviously mean lower polymers demand growth in Asia and Pacific, which includes India, the rest of south Asia and Southeast Asia.

All the trade and demand data on petchems and polymers point to the extraordinary overreliance of our industry on China.

There is also no evidence from our data that this will significantly change up until 2030. No other developing country will come anywhere close to China’s levels of consumption as share of global consumption and its share of demand growth in any petrochemical.

The petchems business has unwittingly ended up with far too many eggs on one basket.