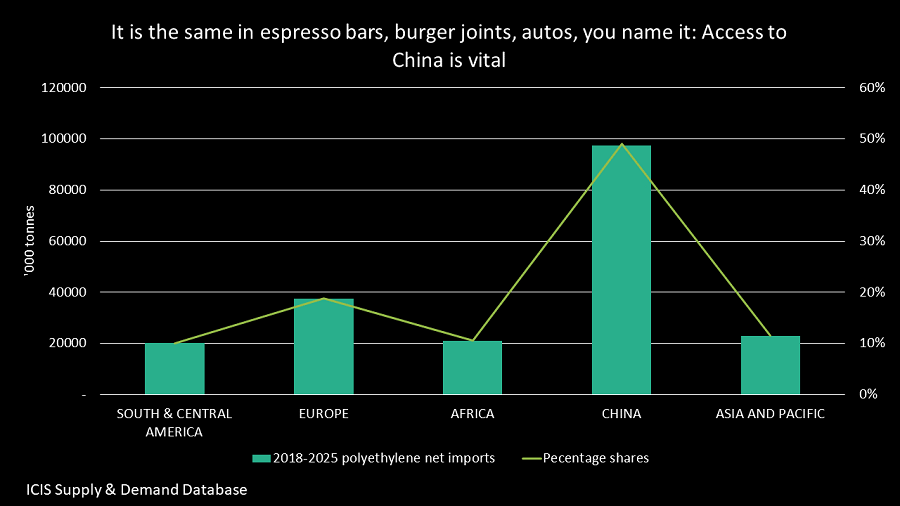 BY LATER today we may or may not know whether President Trump will proceed with threats to impose a further $200bn worth of tariffs against Chinese imports.

This decision is of critical importance to the global chemicals and polymers industries. The go-ahead would mark a major acceleration in the trade war – and would be bound to trigger a major adverse reaction from China. (The White House was due to announce the outcome of its review of the proposed tariffs on 6 September, and, as I write, 6 September has nearly run out Washington DC time).

If there is a delay this doesn’t mean that we are out of the woods. I believe it is likely that the president will go ahead with this new round of tariffs at some point, or will take other measures that escalate the trade war with China. It equally seems likely that disputes with other trading partners, including Canada, will increase. Here is why:

Let’s assume, though, for arguments sake that the president does withdraw his threat of the $200bn of additional tariffs and makes major efforts to calm the trade war down. We would still not be out of the woods. Bill Bishop, who writes the excellent Sinocism newsletter, comments on the NTY op-ed when he writes: “Will Xi [Xi Jinping – China’s president] take these revelations as further evidence that there is no way to trust any trade deal Trump may agree to, and so there is little point in offering any significant concessions to try to forestall the escalating trade war?”

If Xi decides there is little point in offering major concessions, then we will have already gone beyond the point of no return where neither side is able to prevent this trade war from accelerating.

I am once again not going to comment about the rights or wrongs of President Trump’s administration. That is not my job. My job is to instead dispassionately highlight the risks for you, as I have done above. So separate from your thinking your personal politics preferences and start planning for worst-case outcomes.

What immediately follows, with help from some excellent work by my colleagues Joe Chang and Angie Li, is a breakdown of the details of Round One and Two of the trade war – and Round Three, the $200bn proposed tariffs on which we are still waiting for a decision. The key takeaway from Round Three is that it would have a major negative effect on Chinese plastic products demand – and so obviously Chinese polymers demand.

Then in the final section of this long post (these issues need detailed consideration), I will give my views on how China would respond to an acceleration of the trade war and the implications for chemicals and polymers. As usual, I will focus on polyolefins as this is the industry I cover.

A primer: Rounds One, Two and possibly Three of the Trade War

The first round of tariffs in the US/China trade war affected $34bn of imports on both sides. These came into effect on 5 June. No chemicals or chemicals products were affected.

For the US, a big effect of Round Two is on polyolefiins exports to China. The 25% tariffs levied from 23 August include all grades PP that the US ships to China (note I had previously understood that only homopolymer grades were affected. It is now clear that both homopolymer and copolymer grades are covered).

More importantly for the polyolefins industry, China has imposed 25% tariffs on all grades of high-density polyethylene (PE) that the US exports to China. Ninety three percent of the linear-low density PE grades that the US exports to China are also affected. This will make it very difficult for US PE producers to place their volumes as they undergo major capacity expansions.

The same applies to ethylene glycols – another chemicals product covered by 25% Chinese tariffs in Round Two. This second round also saw the same tariffs applied to US exports of ethylene dichloride, styrene, propylene, butadiene, benzene, acrylonitrile and other chemicals and polymers.

As for US 25% tariffs on Chinese exports of chemicals under Round Two, they will have little effect. China’s shipments of all chemicals to the US were each less than 10,000 tonnes in 2017, according to official trade data.

A bigger deal in Round Two was China’s plastic products shipments to the US. Plastic products under the customs code HS code 39 are the subject of 25% tariffs.

In 2017, China’s exports of plastic products made from PE and PP covered by the tariffs came to 128,000 tonnes, according to the US International Trade Commission.  The monetary value of these tonnes was $580m.

China plastics industry players forecast that 2.6m tonnes of annual Chinese plastic products demand would be lost as a result of the tariffs under Rounds Two and Three. Sixty seven percent of plastics products demand is accounted for by products made from polyolefins.

How this would translate into lost tonnes of Chinese polymers demand is impossible to estimate at this stage. But it would clearly be very negative.

In Round Three, US exports to China that would we be covered include paraxylene, ethylbenzene, methanol, propylene glycol, propylene oxide, phenol and acrylic acid. But the overall impact on commodity chemicals would be less than in the second round.

How China could respond to an acceleration of the trade war

A lot of misleading commentary has been written about how China is more vulnerable in this trade war than the US because China exports more to the US than the US exports to China.

This entirely misses the point. It is the prize of access to the Chinese market that the Chinese government can use as leverage in the battle. No market in the world comes anywhere near to being as big as China’s in volume terms for everything from espresso bars to burgers to mobile phones to washing machines – and of course the chemicals and polymers needed to provide these services and finished goods.

There are two obvious reasons for this: One, China has a huge population and Two, China has seen quite spectacular growth in its per capita income levels over the last 20 years because of its role as the manufacturing workshop of the world.

And if you look at any forecast for China versus the rest of the developing world, whether it is for again the growth in the number of coffee bars, burger joints and autos ownership, China will remain the most important market. Whilst its role as an export-focused manufacturer has diminished a little, growth in domestic spending is more than compensating for this loss – especially via mobile internet sales.

Let’s look at this in terms of just PE net imports (imports minus export) from 2000 right through until 2025, as China has been unable, and will still be unable, to build enough capacity to meet its spectacular demand growth:

Beyond the retaliatory tariffs China is already threatening under Round Three (see above for the details), it thus seems very possible that it will respond by denying US companies access to its market – from retail coffee outlooks and burger bars, all the way upstream to petrochemicals and polymers. This access could either be denied directly through new investment restrictions or through appealing to the very strong Chinese national pride.

China has more choices than it did ten years ago. A decade ago, it needed access to US technology. But apart from in perhaps semiconductors – and this is only perhaps – China is far less vulnerable to shutting the door on the US.

And it has no need import US chemicals and polymers, as there are plenty of other suppliers out there.

PREVIOUS POST US ethylene glycols: The Cost Of Exclusion From China
NEXT POST Polyethylene versus polypropylene: Expect the unexpected