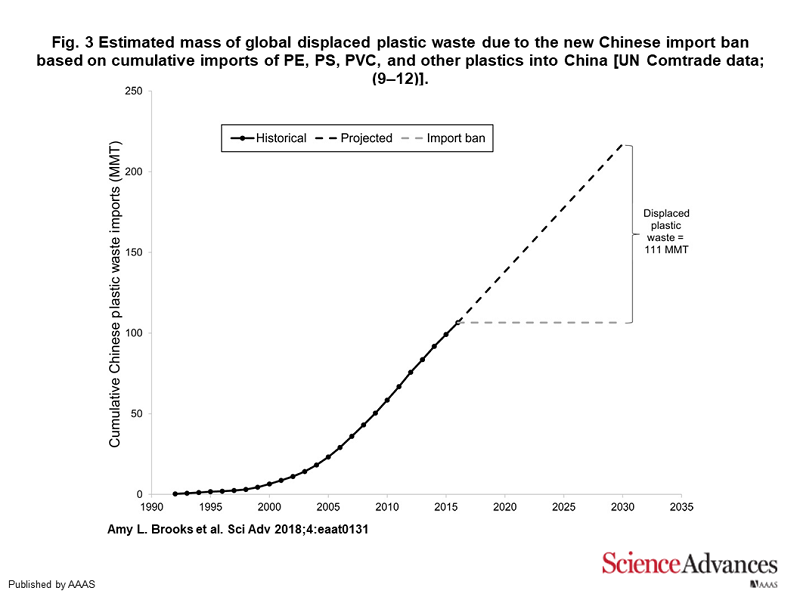 FOR so many years, developed countries were able to limit the extent to which they had to incinerate, landfill and properly recycle plastic waste by shipping the waste to developing countries, mainly to China.

A Science Advances study highlights the extent to which the developed world depended on China as an easy “out of sight out mind” dumping ground for plastic rubbish:

Since it began reporting in 1992, China has imported 106 million MT of plastic waste, making up 45.1% of all cumulative imports. Collectively, China and Hong Kong have imported 72.4% of all plastic waste. However, Hong Kong acts as an entry port into China, with most of the plastic waste imported to Hong Kong (63%) going directly to China as an export in 2016.

But that option is no longer available following China’s decision to severely restrict its imports of plastic rubbish from early 2018 onwards. In theory, plastic waste can still be shipped to China. But in practice, meeting contamination limits of only 0.5% per tonne has created an economically insurmountable barrier for exporters.

The end result has been a 99% drop in China’s imports of scrap or waste polyethylene (PE), polypropylene, polyethylene terephthalate (PET), polystyrene (PS) and other polymers so far in 2018 compared with last year.

It also seems certain that these countries will follow China in restricting imports of contaminated plastic rubbish because of the negative impact on the environment.

The Science Advances study thus estimates that if the new Chinese restrictions remain in place from 2018 until 2020, some 111m tonnes of plastic rubbish that would have been shipped to China will be displaced globally.

Will developed countries end up dumping more plastic in landfills? Certainly not in the EU, which is moving in the opposite direction. The European Circular Economy Package, which was released in June, involves major new restrictions on landfilling. The package states that:

As of 2030, all waste suitable for recycling or other recovery, in particular in municipal waste, must not be accepted in a landfill, except for waste for which landfilling delivers the best environmental outcome.

Obviously, plastic falls under the category of being suitable for recycling, with the Circular Economy Package linked to the EU Plastics Strategy, which was launched in January. The strategy has set to the target that all EU plastics packaging must be recyclable by 2030.

And forget incineration as a means of getting rid of this displaced plastic rubbish in the EU, as regulators remain very much against burning plastic because, according to the European Commission, it generates 400m tonnes of CO2 globally every year.

What of the US, though, given the Trump administration’s policy of rolling back rather than increasing environmental legislation? Science Advances estimates that the US will account for 37m tonnes of the 111m tonnes of displaced waste plastic exports to China in 2018-2030.

But whatever rollback of regulations that allows more landfilling and incineration at a federal level could be more than compensated for by tougher rules in certain pro-green states such as California. There is also, of course, the possibility that President Trump will be out of office by 2020.

And globally, the Science Advance study further underlines the threats and opportunities faced by polymer producers because of the shift in public opinion and so legislation towards plastics. We have gone beyond a historic tipping point: