Home Blogs Asian Chemical Connections Iran and the US: Assessing the risks for petrochemicals and the global economy

Iran and the US: Assessing the risks for petrochemicals and the global economy

As always, these are my personal views only and don’t reflect the views of ICIS 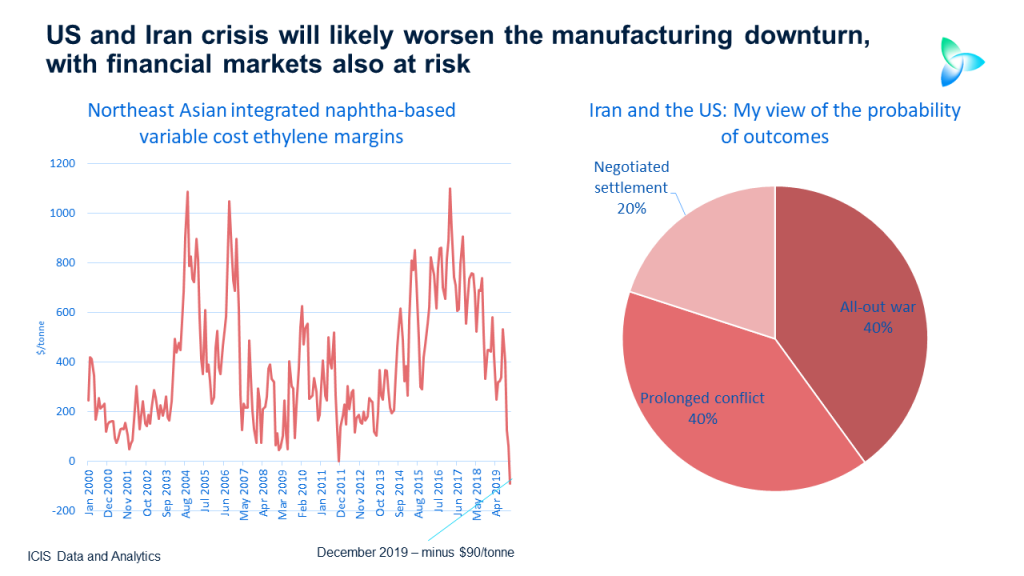 AT TIMES like this it’s very hard to be dispassionate. Emotions run high on either side of the widening political gulf as the two factions shout ever-more loudly at each other and refuse to listen.

This is partly because of the way social media and internet search-engine algorithms works. We are fed news articles and opinions that confirm our existing biases.  Human nature is also such that even when we have escaped the effects of algorithms, we only read information which confirms our biases.

What therefore follows is an honest attempt to be dispassionate, with my personal views set aside about the rights or wrongs of President Trump’s decision to order the killing of Qasem Suleimani (I’ve avoided referring to the killing as “assassination” as even the use of this world can lead to accusations of bias).

All of us must be as dispassionate as possible right now if we are going to accurately assess the implications of Friday’s drone attack for the petrochemicals industry, and for the wider global economy. This assessment must start with a recap of where were before the attack took place.

The data in many petrochemical markets indicated during 2019 we were close to, if not already in, a global manufacturing recession. As we all know, petrochemicals markets are a great barometer for the broader economy as they are the starting point for numerous manufacturing chains.

Take benzene as a good example where Northeast Asia spreads over naphtha feedstock costs were below $100/tonne during six months of last year.  On the two previous prolonged occasions since 2000 when spreads were below $100/tonne, global economic recessions were taking place. These recessions affected manufacturing, consumer spending and financial markets.

There was nothing about NEA benzene markets in 2019 which suggested correlation rather than causation. Last year’s new capacity wasn’t exceptionally high and feedstock costs were relatively cheap.

The above chart on the left further underlines the evidence of the weakness in manufacturing. As you can see, NEA ethylene margins consistently trended lower in 2019 and in December reached their lowest level since at least January 2000 – the starting point for our margin assessments.

This was mainly the result of the long-term structural slowdown in the Chinese economy resulting from demographic and debt challenges, with the trade war a minor secondary factor. A further reason was the build-up in new US polyethylene (PE) capacity.

Don’t be confused into thinking that anything will change in China in 2020, despite all the noise surrounding Beijing’s decision to release $115bn of extra liquidity into the banking system ahead of the Lunar New Year. Exactly the same thing happened just before the 2019 Lunar New Year. But credit availability via the shadow banking system still averaged just $68bn per month in 2019 versus the 2017 all-time peak of $495bn a month.

China will stick to its economic reforming guns in 2020, as it has no choice because of the law of diminishing returns. As the governor of the People’s Bank of China, Yi Gang, wrote in a November 2019 paper:

First, fundamentals such as economic growth trends are determined by important economic structural variables. For example, an ageing population will lead to slower potential economic and productivity growth, increase savings, lower consumption and price levels; technological progress will also lead to lower price levels, and the degree of economic globalisation will also have an important impact on the decline in labour costs. But none of these factors can be changed by monetary policy and low interest rates.”

Meeting the definition of an act of war

Iran will be forced respond, not for reasons of pride or loss of face, but because the attack is perceived as a threat to the country’s entire top leadership and the functioning of the state. In responding, Iran faces an extraordinarily difficult task, adds the NYT:

It will likely aim for counterattacks damaging enough to persuade the United States that killing General Suleimani was not worth it — a high bar, given his value and the far superior American military strength — but not so damaging as to trigger an all-out conflict.

If Iran gets it wrong, we will end up in all-out war between US and Iran with major humanitarian and economic consequences. Success would be defined as attacks on US overseas assets that would cause a more limited US reaction, but still enough to accelerate the downturn in manufacturing.

Note that I have kept using the term “manufacturing recession” rather than economic recession as US financial markets remain buoyant. They hit new record highs before Christmas which is colouring the perception of events in the real economy. The new highs in financial markets reflect the continued availability of very cheap lending resulting from the Fed’s change of direction in 2019.

When might financial markets end their bull run? We await a “Minsky Moment” that must happen at some point given that total global debt (public plus private) reached S$188 trillion at the end of 2018, up by US$3 trillion when compared with 2017. In 2008, immediately ahead of the Global Financial Crisis, global debt totalled $173 trillion, during an era when both China and the West were supported by much more favourable demographics.

A war between the US and Iran, or even tit-for-tat attacks on each other’s assets that fall short of all-out war, could end up being the next Minsky Moment. We are in the Ponzi phase of Minsky’s Financial Instability Hypothesis, as, in many cases, loans have been issued on the basis that borrowers can only initially afford to pay the interest. Principal repayments can only be met if assets continue to rise in value. If assets instead collapse in value, then neither interest nor principal payments can be met.

Once financial markets finally correct so will US consumer spending. We will then be able to declare a full economic recession rather just a manufacturing recession.

Toss of a coin: Either all-out war or prolonged conflict

That’s what it feels like right now to me. Let’s hope events improve and that my percentage guess of a negotiated settlement rises from 20%, reducing the equal 40%/40% probability of either a full-scale war or a long-running conflict.

Forecasting oil prices is a fool’s errand which all us must constantly run. I am not going to risk giving you actual numbers. But clearly, a full-scale war would send crude much higher with a prolonged conflict leading to a constant risk premium.

Specifically in the case of petrochemicals, a lot of focus will be devoted to potential supply disruptions as so much product moves through the Strait of Hormuz – as does on one quarter of the world’s oil supplies. Iran has the capacity to block the strait.

Traders love volatility and so even the suggestion of petrochemicals supply disruption, combined with higher crude prices, will push petrochemicals pricing higher over the next few days and weeks.

The excellent ICIS Supply & Demand Database is once again useful here. Taking polyethylene (PE) as an example where the database indicates that:

But the much more important longer-term issue will be the impact on demand if a negotiated settlement cannot be reached. And even if a settlement is reached, 2020 is still going to be a more challenging year as China’s economy continues to decelerate.

PREVIOUS POST Happy Festive Season and all the best for 2020: The blog is back on 5 January
NEXT POST US and Iran conflict in a world of declining growth and fragile supply chains