Home Blogs Asian Chemical Connections China: temper your expectations of a H2 recovery for supply as well as demand reasons 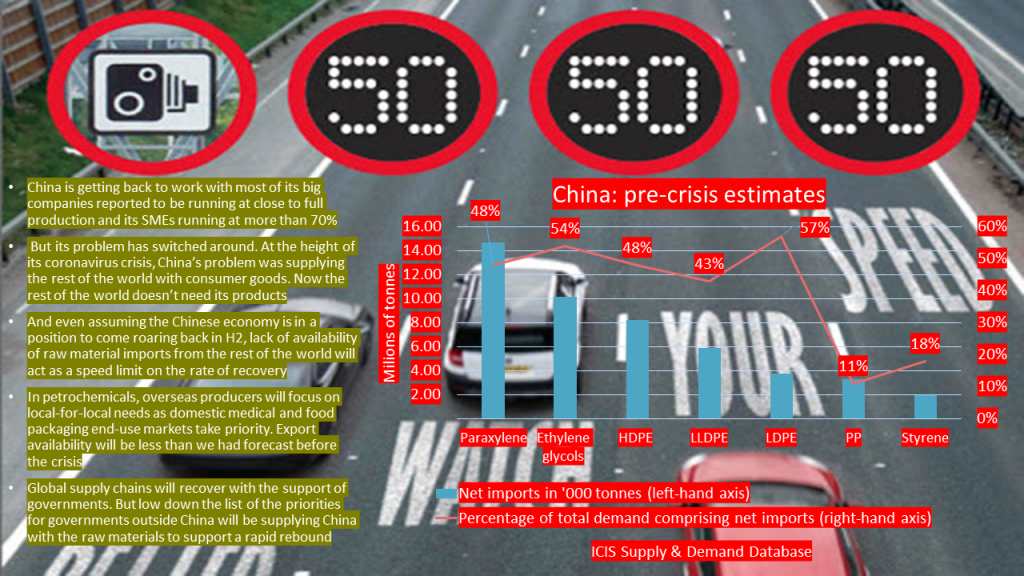 CHINA IS gradually getting back to work, but only gradually because the government is trying to carefully calibrate the release of tens of millions of people from quarantine without triggering a second wave of infections. The way that China has tackled the disease has been nothing short of heroic.

Small and medium-sized enterprises, who make up the bulk of the buyers and processors of petrochemicals and polymers, are however more than 70% back at work, according to China’s Ministry of Industry and Information. Many big companies are just about back to normal operating rates, according to official data and anecdotal evidence from ex-pats in China.

If there is no immediate big secondary pick-up in infections, we can therefore expect some recovery in China’s domestic-for-domestic petrochemicals demand during the next few months.

But the size of the hole created in demand during the height of the lockdown period should not be underestimated. Chinese GDP was between minus 10% and minus 20% in January-February. No amount of recovery during the rest of this year can therefore, I believe, fully compensate for such a sharp downturn. In my opinion, Chinese petrochemicals demand will be negative during the full-year 2020 compared with 2019.

Some end-use applications did well during the peak of the crisis of the coronavirus crisis in China. Take polypropylene (PP) non-woven grade producers, for example as PP non-woven is used to make face masks. This support may continue through increased exports of face masks. But impact copolymer PP demand has just about vanished because of the collapse of auto component exports and the slump in local car sales, which were down by 80% in February. On balance across all the petrochemicals I see more losses than gains.

How quickly China bounces back in 2021 depends on whether its next winter season sees another major outbreak of coronavirus. Some scientists are warning that because China was so successful in controlling the disease through nationwide lockdowns, the scale and effectiveness of which no other country can probably repeat, its population may lack high levels of immunity to COVID-19. You get immunity from catching and recovering from a disease. When the cold weather returns (in cold weather, the disease is thought to more easily spread), some scientists are concerned that this could mean another big outbreak.

The Robert Koch institute, a German government institute responsible for disease control and prevention, has estimated it could take the world up to two years to bring the disease under control. That would act as a major drag on Chinese exports until the second half of 2022.

But if say the disease is brought under control within the next six months – my best-case scenario –  China’s exports might rebound in 2020 with the recovery given a turbo-boosted by huge global monetary and fiscal stimulus. There may also be no secondary outbreak of the disease in China this winter.

Sadly, though, the course of events over the last week suggest that global control of the disease will take longer than six months to achieve. I am confident that the Robert Kock prediction of two years is a worst-case and unlikely outcome. But six months now seems to short of a timeframe.

I could be wrong of course

All of us will get a lot of things wrong because the scale and complexity of the crisis. There are so many second, third and fourth-order effects that understanding the implications will be a constantly evolving process which will likely take years to complete.

On this basis, let’s therefore assume that most of the above is wrong. China might see a strong economic rebound regardless of events overseas in H2 of this year. The role of domestic consumption in China’s GDP has greatly increased over the last decade with exports diminishing. So perhaps a big government push to get the local consumer spending big time again will cause GDP – and thus petrochemicals demand – to rebound very strongly. Annual petrochemicals growth might not be negative in 2020 versus 2019.

But one of the known knowns of this crisis – never mind the known unknowns and the unknown unknowns – pose a challenge to the above scenario. We know this:  The availability of the overseas raw materials that China needs to power its economy has become constrained and may remain constrained for the rest of this year. Insufficient supply of raw materials could act as a speed limit on the Chinese recovery.

China is for example heavily dependent on imports of polyethylene, ethylene glycols and paraxylene (PX) because of insufficient local production. Self-sufficiency in polypropylene and styrene has risen considerably over the past few years. But even in these products, local producers would be hard-pressed to meet a big improvement in local demand without significant support from imports.

A further complication occurs when you move upstream, to the imports of petrochemicals that Chinese producers require to make their finished petrochemical products.

For example, local PX producers who are dependent on imported mixed xylenes could struggle to obtain the imports they need to run their plants hard enough to satisfy a resurgence in local purified terephthalic acid demand.

Cuts in global refinery runs, which are taking place because of the collapse in fuels demand, may reduce the availability of light naphtha for steam cracking and heavy naphtha for reforming.

The main priority of some overseas petrochemical producers may not be supplying China. The No1 priority could instead be meeting the needs of the countries in which they operate – e.g. guaranteeing supply of enough polymers to meet medical equipment and food-supply requirements.

Governments may even go as far as insisting this happens and that all efforts are focused on local emergency needs. Could we for instance see the US Defence Act applied to the US petrochemicals industry in the way that it has already been applied to GM and the production of ventilators?

The Middle East, China’s biggest trading partner, has of course vast surpluses of petrochemicals as its industry has been built to serve exports and so the dynamics here might be slightly different. Might the region’s producers focus on helping the rest of the world meet its medical and food packaging needs above all other priorities? This would obviously be the right thing to do and would build strong political goodwill.

In the case of Iran, one of China’s biggest PE trading partners, we don’t know the extent to which the outbreak of the virus in Iran could reduce its ability to produce and export petrochemicals.

The global shipping system is being badly disrupted by coronavirus. Whilst China’s ports seem to be fully operating again, ports elsewhere are shutting down. I think the closure of overseas ports is just temporary as governments will get involved to restore medical, food and other critical supply chains. But whilst the West is in crisis mode, low down on the list of priorities will be ensuring China gets the raw materials it needs for a rapid H2 2020 economic rebound.

No economy is an island in this highly globalised world, leaving China very vulnerable to events outside its control.

I finished last week on an optimistic note and I am still optimistic despite the continued rapid rise in new coronavirus infections and deaths in the West. We will come through this crisis stronger as a petrochemicals business community. We can and will achieve this if we work together sharing data and ideas. We can mitigate the damage and be fully ready for the recovery whenever it arrives.

PREVIOUS POST Petrochemical feedstock purchasing managers: What to think about and what do next
NEXT POST No business as usual despite re-ordering of global polyethylene competitiveness