Home Blogs Petrochemical feedstock purchasing managers: What to think about and what do next 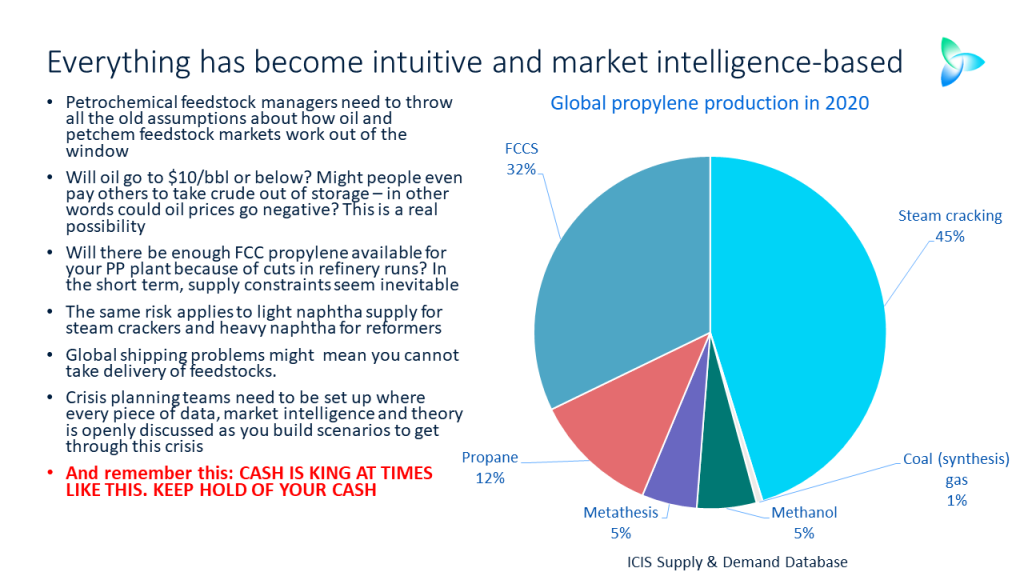 ALL THE old assumptions about how oil, feedstock and petrochemicals markets work need to quite literally be thrown out of the window. No old model or way of thinking will work anymore until the crisis is over. The permanent changes that will take place in markets, and there will be many, is a subject for later consideration.

One aspect of this New Normal, and the subject of today’s post, is what lies ahead for the dynamics of petrochemical feedstock supply and pricing. This post is therefore designed to support petrochemical feedstock purchasing managers. Please take issue with what follows as of course it will be nowhere near the full or accurate picture. The main point here is to instead encourage industry-wide debates that help us get through the crisis.

On oil we know that there has been never been a demand shock on this scale before. Before, the major shocks have instead been mainly on the supply side because of geopolitics. Take the 1973 oil embargo as the best example when Middle East producers stopped shipping crude to the West because of a dispute over Israel. Economic activity was fine back then, in fact it was booming as too much supply was chasing too little demand.

Even in 2098-2009, the demand shock was very short-lived. Only for one or two quarters did economic activity significantly decline thanks to a huge dollop of Chinese economic stimulus that essentially rescued the global economy. But today, no amount of stimulus from whatever source can do much for demand as quarantine measures spread, with the negative effects on demand far deeper and longer lasting than during the Global Financial Crisis. We are seeing short term demand levels similar to the Great Depression.

We all hope that the crisis will be contained within six months and crude demand might then return to something like normal – although a full recovery would likely take a lot longer. How quickly will for example air travel recovery? Individuals and companies could well be very cautious about returning to their old travel patterns.

It is not just about crude of course. We simply don’t know how refineries will operate over the next few months at least – and possibly a lot longer. I do believe that governments will ultimately ensure that refineries keep on operating. Continued operations are not an issue at all in countries and regions where assets are state-owned and where there are close links between private industry and governments.

But in the short term at least, some refineries might even have to shut down because there is almost no demand for gasoline, diesel and kerosene or jet fuel. Maybe not. But at the very least refinery runs will have to be cut, reducing the availability of light naphtha for steam crackers, heavy naphtha for reformers and the refinery-sourced propylene that ICIS estimates will account for 32% of 2020 global propylene production.

We have simply no idea what this means for crude pricing. Anyone who claims they can forecast oil prices is being, to put it politely, economical with the truth. But there are some who are great deal better than others at this impossible job, including my fellow blogger Paul Hodges.

This article from Reuters details the soaring cost of storage because there is virtually no demand. Reuters writes: From Canada and the Caribbean to the Baltic and Singapore, oil tanks around the world are filling fast, despite a 50%-100% jump in lease costs, as oil companies and traders scramble to park unwanted crude and refined products.

During our last night’s weekly ICIS webinar on coronavirus and the big challenges for the petrochemicals industry, the view was expressed that Saudi Arabia and Russia would soon have to come back to the negotiating table. Production cuts would then take place to bring the market nearer to balance.

But a quite extraordinary research note from the Goldman Sachs commodities team, which was published in the excellent FT Alphaville column, reads as follows:

Global isolation measures are leading to an unprecedented collapse in oil demand which we now forecast will fall by 10.5 mb/d in March and by 18.7 mb/d in April (our 2020 yoy demand forecast is now -4.25 mb/d). A demand shock of this magnitude will overwhelm any supply response including any potential core-OPEC output freeze or cut.

Product storage saturation at refineries is therefore set to occur over the next several weeks. At that point, the product surplus will become a crude one and we expect its unprecedented velocity will create similar logistical crude storage constraints.

Longer term, Goldman warns that damage to reservoirs because of production cuts could cause a spike in crud prices to above its base case for Q4 2040 – $40/bbl. Or, if the virus is not under control by then, prices may stay a lot lower for a lot longer.

What you need to do

In the face of unprecedented levels of uncertainty, a  risk is that we throw our hands in the air and say that nothing can be done beyond sticking to the old models and hoping the world quickly returns to normal.

But that’s not going to work. What instead you need to do as a feedstock purchasing manager is to build up a crisis planning team, if you haven’t done so already, and pour resources into collecting every bit of up-to-date market intelligence that you can find. And there must be no reluctance to accept new ideas and unconventional thinking because nothing is behaving as it normally does.

You must also stress test your feedstock purchasing operations under the possibility that crude does indeed go to $10/bbl or below over the next few weeks and months. This might not happen, of course. But don’t take any unnecessary risks as cash is king in this environment.

It is also important to check on whether your feedstock supplier will be able to supply the usual volumes. This might even apply if you are feedstock is ethane and/or gas field-sourced propane. The collapse in economic activity threatens usual levels of natural gas production.

Another major risk – and I cannot emphasise this enough – is supply chains. Ports may temporarily shut down because of a lack of truck drivers, dockers and customs officers until again governments get involved. It is critical that you closely and continually asses your supply-chain risks as of course you may not be able to take delivery of feedstocks.

Here is another thing to consider: The old relationships between oil and naphtha costs will no longer apply because traditional seasonality patterns have gone out of the window:

To this end, ICIS is holding a series of free webinars on every aspect of the petrochemicals business. Contact me at john.richardson@icis.com for the details.

PREVIOUS POST Vital work to maintain petrochemicals supply for essential services must continue
NEXT POST China: temper your expectations of a H2 recovery for supply as well as demand reasons