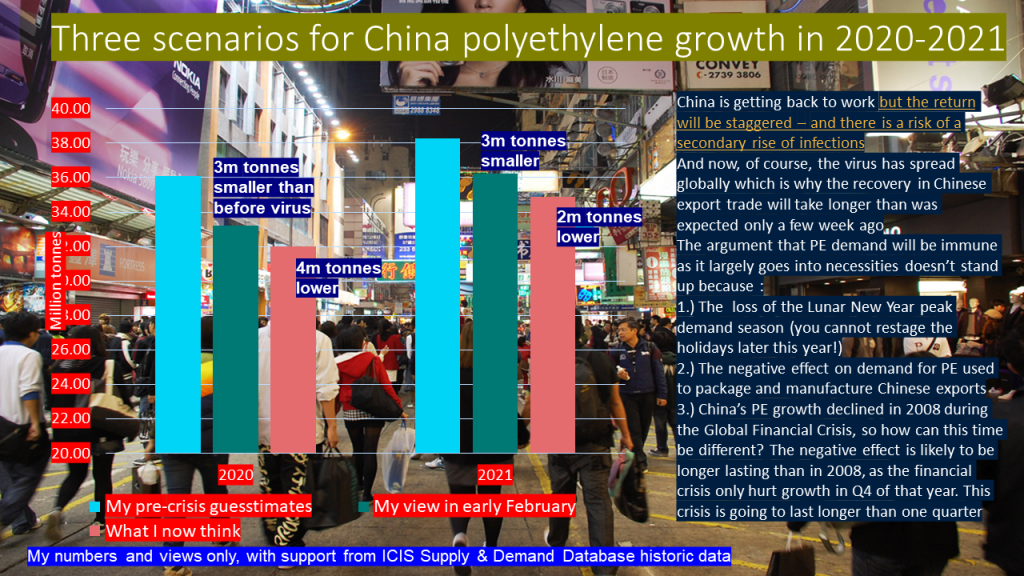 ONE of the enduring false views out there is that China’s economy will entirely recover later this year once the coronavirus crisis has been brought under control. Support for this misguided picture of events has built over the last couple of weeks as the number of new infections in China has declined.  As I have been arguing since early February, such a recovery is impossible.

The first reason for this is because the Lunar New Year is a peak demand season. As we have lost most of the growth from that season due to all the cancelled trips home due to quarantine restrictions, it will be impossible to get this growth back later in the year. China cannot restage the Lunar New Year later in 2020 for the sake of supporting growth! The FT supported this view in an article yesterday, when it wrote: In a short-term downturn, capital expenditures are only delayed. But some spending, such as lost box office revenues over the Chinese New Year period — $3.9m this year compared with $1.5bn in 2019 — will never be recouped.

And secondly, assuming that China has definitively brought the disease under growth, I’ve been contending for several weeks that once this had been achieved, global supply chains would take a few month’s longer to return to normal, thereby continuing to depress the export component of China’s economy. This view was supported by a New York Times article which was published late last month.

It also became clear in early February that the knock-on effects of the disruptions in China on global supply chains caused by the outbreak in China would delay the Chinese rebound. Think, for example, of all the container and other shipping space in the wrong place and thus the time needed to reposition the containers – and the time needed to restore capacity on shipping routes that has been cut in order to deal with the collapse of Chinese exports. It was always also going to take a while for global inventories of components and finished goods up and down all the manufacturing value chains to be replaced in order to get China’s export industries back to full operations.

But what of course has happened since early February is that the crisis has gone global. We no longer only need to consider the time China and the rest of the world will take to unravel logistics problems caused by the outbreak just in China only. This is now an academic issue as the issue has instead become this: The collapse of overseas demand for Chinese goods.

Further, the kind of supply-chain problems we have seen in China are likely to become a global issue with ports shut down and domestic delivery systems brought to a standstill. Even if you assume that the rest of the world can quickly bring the virus under control – and this is obviously a big assumption – it would take a long while for global supply chain problems to be sorted out. Because logistics problems are now global, then of course they will take longer to sort out than if a major outbreak of the virus had only taken place in China.

There is also the dangerous complacency that turning the Chinese economy back on is like turning on a light switch. Nothing except light moves at the speed of light, according to our current scientific knowledge. This obviously includes the speed at which China will get to back to work.

The return to work is being staggered in order try and prevent a secondary rise in the number of infections. Many offices and factories will for a good while longer require some of their staff to work from home. This will further dampen the demand for all the things we buy when we are at work. It also seems likely that large public gatherings such as conferences, concerts and sporting events cannot take place for at least a few more months. Think of the data from the FT on the collapse of box office sales during the Lunar New Year. There isn’t going to anything but a very slow recovery in cinema attendance.

Thanks to nothing short of a superb coordinated effort by the Chinese government, and the courage and hard work of many millions of people, as I said the disease it looks as the disease in China has been brought under control. But we simply don’t know, nobody knows, if this will last. A risk therefore remains that there will be a secondary rise in infections. We don’t know enough about how this new disease is transmitted, and the best ways to contain the illness, to only assume that the disease has peaked for good. At the very least, this uncertainty will act as a drag on consumer sentiment; at the very worst – and let’s all hope and pray that this doesn’t happen – the disease may make a comeback.

Even in early February, when the outbreak and its full ramifications were still in its early phases, it was clear that a V-shaped rebound in China was out of the question. But still, as I said, some people are clinging onto this notion. I am concerned that some of the ICIS clients – the petrochemical producers, buyers and traders – might be amongst the group. This post is thus designed to dispel this lingering idea in order to support more sensible planning.

Now here are some of my thoughts on the polyethylene (PE) market to help with your internal discussions.

What’s the scale of the decline in Chinese economic growth in 2020 we are looking at? Consider estimates that Q1 growth could be minus 2% all the way to minus 6.5%? “Too pessimistic,” I can hear you cry, “all doom and gloom again”. Perhaps this is too pessimistic, but please be realistic. What’s clear is that analysis suggesting first-quarter growth only falling to 4-5% is not credible.

Also lacking credibility, in my views, are arguments that because polyethylene (PE) mainly goes into essentials, such as packaging food, detergents and shampoos etc., its growth in China will be pretty much immune.

In 2008 over 2007, at the height of the Global Financial Crisis, Chinese high-density PE and low-density PE growth fell into low single digits with linear-low density PE at minus 3%. This is a much bigger shock to the Chinese economy than the loss of export orders to the West that was one of the results of the financial crisis. The loss of these orders only hurt the Chinese economy in Q4 of that year – along with destocking due to collapsing oil prices – as the crisis didn’t begin until September. And yet PE growth still saw significant declines. For example, growth in LDPE demand was 12% in 2007 but fell to just 3% in 2008. LLDPE consumption growth, as mentioned above, was minus 3% in 2008 from 6% in 2007.

It is true, of course, that PE goes into lots of necessities. But think of all the lost packaging demand from the snacks not sold because of cancelled Lunar New Year trips home in 2020. What about all the packaging of drinks and chocolates that will not be needed because of the collapse of attendance at cinemas and the postponement, probably until next year, of conferences and concerts? This lost demand cannot be recovered later in 2020.

As I’ve discussed on the blog before, there will be gain in consumption of LLDPE shrink films and LLDPE film and HDPE injection grades as a result of the virus. Shrink film has been in greater demand because of double wrapping of finished goods for hygiene reasons; LLDPE films and HDPE injection grades have seen improvements in consumption for packaging of food delivered to people’s homes because of quarantine restrictions. But the loss of demand from elsewhere, will, I believe, be much greater than the gains.

You must also consider the longer-than-expected effect on Chinese PE used on to either package or manufacture exports now that the virus has spread globally.

I must stress that these numbers are my largely my numbers only when it comes to 2020 and 2021, with historic support from the excellent ICIS Supply & Demand Database. My work is far from scientific as it is based on what I think the market is telling us. It is not as thorough as the work my colleagues are carrying out at ICIS as they complete final updates for what happened in 2019 and what this means for forecasts for 2020 and beyond in China and elsewhere. Our final numbers will be released later this year.

But hopefully all the above will help you with you re-forecasting process. You of course need to go much further than this as this just scratches the surface. This is just a small sample of the much more comprehensive and detailed work we can provide for you. ICIS is here to work with your company across all geographies and petrochemicals in order to help mitigate the impact of this crisis.

PREVIOUS POST Sustained collapse in oil prices: Effect on petrochemicals and the global economy
NEXT POST Big declines in Chinese polyethylene imports, a global recession and a financial crisis