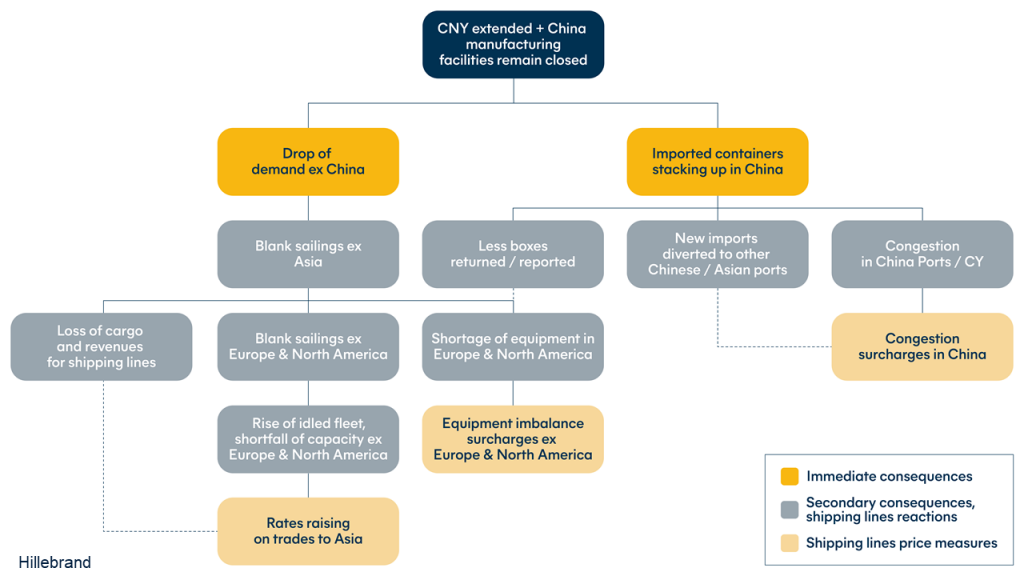 THIS excellent chart highlights the lingering effects of the coronavirus outbreak in China on the global container freight industry. Now, because the crisis has gone global, we must expect the disruptions to intensify:

Petrochemicals will become a much more regional business. Don’t say I didn’t warn you. I predicted this would happen before the crisis went global because of the disruptions caused by events in China alone, which, as I said, are detailed in the above chart from freight forwarder, Hillebrand.

Will the US be able to find the container space to export all its polyethylene (PE) – assuming of course that the demand will be there in the first place for its exports? We simply don’t know. If the US can find the space, higher freight costs will eat into ethane-based PE margins already depleted by the collapse in oil prices.

Neither do we know whether the Middle East will be able to find enough container space to move the exports of PE and polypropylene that had been expected in 2020. The Middle East will also be hit both by rising freight costs and the collapse in oil prices, as its PE producers are also ethane based.

Will some importers be able to secure the resins they need to meet the demand that’s left over as the world sinks into a very deep global recession? This would further damage their economies.

Even if China’s crackers run flat out, and that’s going to be difficult because of shortages of feedstock caused by cuts in refinery runs, it is impossible for China to meet all its import needs because of its big structural deficits. Refinery runs were cut due to the collapse of fuels demand at the height of the country’s coronavirus crisis. Demand for gasoline and diesel will take several more months to get back to normal.

But the flip side of the coin is that local producers will benefit from less import competition. Think of European PE producers which have faced increasing competition from low cost US high-density PE (HDPE) and linear-low density PE (LLDPE) imports, since the big ramp-up in US capacity.

Further complicating the picture though for Europe is that it is a net exporter of low-density PE – and, whilst it is in pet imports positions in HDPE and LLDPE, it still exports substantial volumes of these resins. So, whilst there will be, as I said, a gain from less import competition there will also be a loss from a reduced ability to export.

Muddying the picture, though, is the collapse in demand for durable goods such as autos and white goods. Very few people will have the confidence or the ability to buy a new car. It won’t matter that much that there is a shortage of container space to export and import polymers that into these end-use applications as the collapse in demand will be the main issue.

There will though be temporary surges in demand for some durable goods due to changes in lifestyles. For example, in Australia, demand for computer monitors and office furniture has sharply increased because of the rise in home working.

The question then becomes whether there will be enough container space to deliver polymers to the locations that make the computer monitors and the furniture that are exported to Australia. And/or will shortages of office equipment drive costs so high that people will not be able to afford to equip their homes?

Some local polymer producers will however benefit from more protected domestic markets, provided their operations are not affected by enforced quarantining of plant, sales and delivery workers.