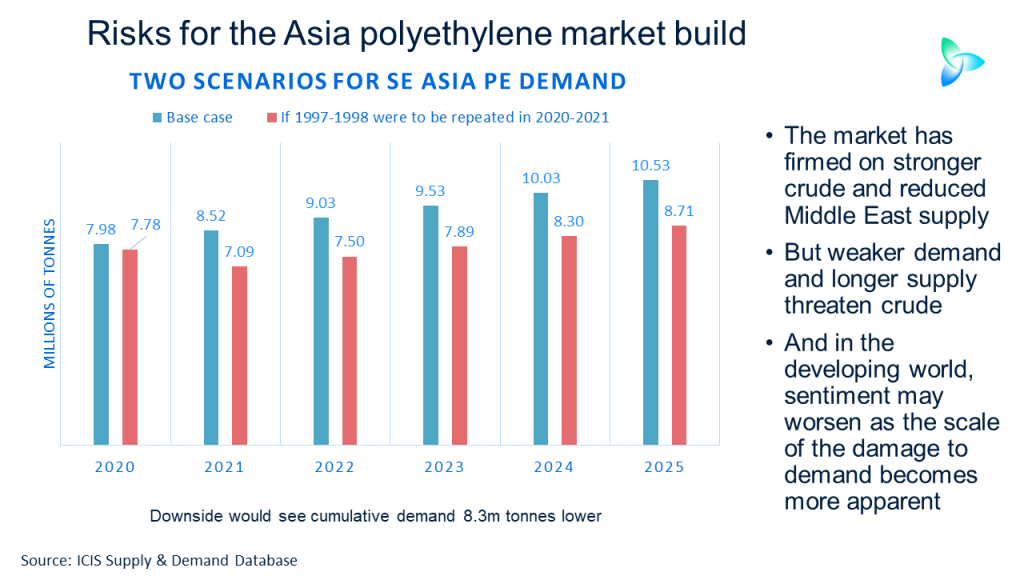 THERE are reports of significant cuts in Middle East polyethylene (PE) operating rates because of reduced availability of associated ethane gas feedstock, the result of lower oil output.

Combine this with the official Chinese government narrative of a strong recovery in the local economy, along with the emergence of much of the rest of Asia from lockdown, and you can build an argument for stronger PE pricing over the next few weeks or even months.

But please, please be careful out there. Critical in all this is of course the direction of crude oil prices and what is happening on the other side of the world – in the US.

The case for a sharp fall in oil prices

The White House dismisses the idea of a second wave of the pandemic. That’s right. It is premature to talk about a second wave as the first wave doesn’t appear to be over: Yesterday, the US saw the biggest number of new coronavirus cases since the pandemic began.

The enormous scale of the damage to the US economy is also not being factored in by the country’s equity markets, the movements of which are so intimately linked to international oil prices.

US stock markets continue to point towards a V-shaped recovery. But I believe that at some point over the next few months, the markets will correct downwards to reflect a lost decade of growth, equivalent to some $8tn being wiped off the value of the US economy.

In China, we know the official government narrative doesn’t reflect the risks on the ground of a secondary outbreak of the virus getting out of control or the impact on growth from lost exports of manufactured goods.

China did a terrific job in bringing the virus under control and so I see every chance that China will repeat the success.

But that still leaves the loss of exports of manufactured goods which I see becoming more apparent over the next few months. China will, I believe, almost entirely miss out in its traditional peak manufacturing season, which runs from August until September.

China could eke out positive GDP growth of around 1-2% in 2020 thanks to a new economic stimulus package, mainly comprising infrastructure spending, that was announced at this month’s delayed National People’s Congress.

Beware though that much of the package contained already announced spending that has been brought forward – and, as I said, beware of the impact of a missed peak manufacturing season. This is when China normally ramps up production of washing machines and TVs etc for export to the West in time for Christmas. But not in 2020 because of:

Also consider the risk that OPEC+ might not stick to its cutbacks in oil production as we move into Q3. Russia can make money at $40/bbl. US shale oil wells are also restarting because at today’s prices as they are back in profit.

We could return to the type of oil-price deflation that we saw in April because of weaker oil demand as supply also increases.

If the OPEC+ production cutbacks did unravel, the Middle East would have more ethane from associated gas to run its PE plants harder and battle harder against the US for market share.

As for US PE production, there is talk in the Asian PE markets of lower volumes arriving in May and June than was the case in January-April. This may or may not be true as we have no trade data for May or June to support this notion.

What we do know, though, is that more US ethylene is heading to Asia from the recently started up Enterprise Navigator terminal. A total of around 150,000 tonnes of US cargoes are likely to move to Asia for loading between the end of May and July – although there could be some delays due to logistics.

Rising Asian ethylene supply could exert downward pressure on the region’s PE market. US PE exports may also continue to rise in May and June following their big increases in January-April.

The data shows US January-April exports to Asia were more or less flat as a decline in shipments to southeast Asia (SE Asia) was replaced by a rise in cargoes to China. This was the result of the removal of the 25% additional tariffs on US HDPE and LLDPE, imposed as part of the trade war (last year, the US had shipped more to SE Asia as SE Asia replaced lost US volumes in China).

And then there is demand

There’s a mountain of anecdotal evidence suggesting global PE demand is faring better than during previous economic downturns. This is because of greater demand for packaging films as people stock- up on food during lockdowns.

Add to this greater hygiene regimes – for example, increased purchases of disinfectant in HDPE bottles – and perhaps this economic crisis is fundamentally different in its nature for the PE industry than previous crises.

Balanced against this is the risk that as many as 420m people in the emerging and developing countries could be pushed into extreme poverty by the pandemic, defined as living on less than $1.90 a day. This will of course reduce demand for even the most basic grades of PE as living standards collapse.

This leads me onto the chart at the beginning of this blog post. It is possible to compare what happened in SE Asia PE markets in 1997-1998 during the Asian Financial Crisis and use this as a basis for what could happen in 2020-2021 with knock-on effects through to 2025.

In such an outcome, if the declines in growth seen during the Asian Financial Crisis were exactly repeated, cumulative  demand between 2020 and 2025 would be 8.3m tonnes lower than our base case. Perhaps because of the vulnerability of those of very low incomes, this particular earlier economic crisis is a good model for what will happen in SE Asia.

Once again, please, please be careful out there and don’t take any unnecessary risks over the next few months in building either finished product or raw-material inventories. You cannot afford to repeat the mistakes from Q1, when nearly everyone assumed that oil prices would stay around $50/bbl and PE prices would remain firm.