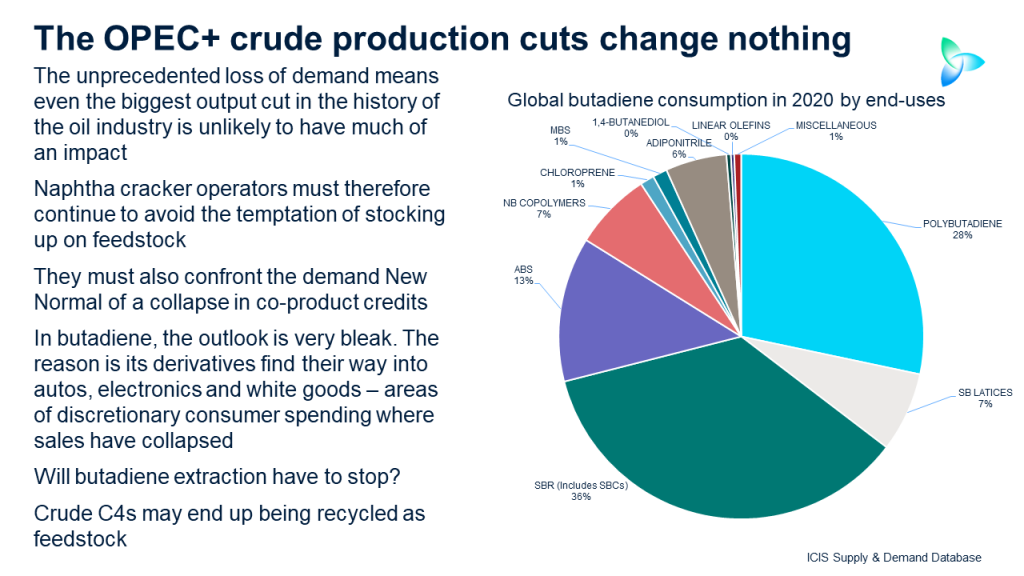 DON’T SAY I didn’t warn you. It has been clear since early April that no amount of production cutbacks could reverse the weakness in oil markets.

And sure enough, despite the 10m barrel a day OPEC+ reduction in output agreed over the weekend – the biggest cutback in the history of the industry – headline international prices have so far risen very modestly.

I now see every chance that as the extent of the damage to the global economy becomes more and more apparent, the headline Brent and WTI prices for oil could easily continue to fall towards $10 a barrel during Q2.

At the very least, regional prices for grades of crude may head in that direction as storage continues to strain at the limits. US Bakken oil was for example already fetching just $14 a barrel last week, well below the headline WTI price of around $26 a barrel.

The scale of the demand shock is totally unprecedented as a new Rystad Energy report indicates. Rystad forecasts  the global demand loss will be 20m barrels a day in May, double the OPEC+ cutback, and 15m barrels a day in June.

In India, oil demand has plunged by no less than 70% because of its nationwide lockdown with demand in other countries no doubt registering similarly spectacular declines.

Thanks to this post in oilprice.com for highlighting these important market trends.

My three risks for cracker operators who stock-up on naphtha in the second quarter are therefore unchanged from my 3 April posts:

In the above chart, I detail the derivatives for butadiene – one of the worst-affected of the steam cracker co-products. The main use for synthetic rubber is of course automobile tyres and there is virtually no demand for tyres.

Another major downstream use for butadiene is into ABS, which is heavily used in the autos, electronics and white goods sectors.

I wouldn’t be surprised if cracker operators are forced to stop extracting butadiene from crude C4s with crude C4s instead recycled as a cracker feedstock.

No significant recovery in oil prices in 2020

Beyond this quarter, it is also critically important that you don’t assume that the Old Normal will begin to return with oil prices steadily rising.

This is possible, of course. But I see this as very unlikely given the sheer enormity of the economic damage that’s been inflicted on the global economy.

As Professor Eswar Prasad of the Brookings Institution says in today’s FT:

Demand has been ravaged, there are extensive disruptions to manufacturing supply chains, and a financial crisis is unfolding simultaneously.

Unlike the 2008-09 crisis that was triggered by liquidity shortages in financial markets, the crisis now unfolding involves more fundamental solvency issues for many firms and industries beyond finance.

Note his reference to a financial crisis. This is something I’ve been warning about for several years.

Sure, crude may bounce around a lot with occasional rallies on confidence that we are getting on top of the virus.

The great new is that there are many indications to this effect as the number of cases in several developed countries appears to be reaching a peak.

But these sentiment-drive bounces in the oil price will, I believe, quickly dissipate as the extent of the economic damage – the biggest hole in the global economy since at least the Great Depression – once again becomes apparent.

There is no point in sugaring the pill, I am afraid. This won’t help anyone.

PREVIOUS POST After COVID-19: How US petrochemicals could become the laggard
NEXT POST China economy faces huge headwinds with negative full-year growth an inevitability