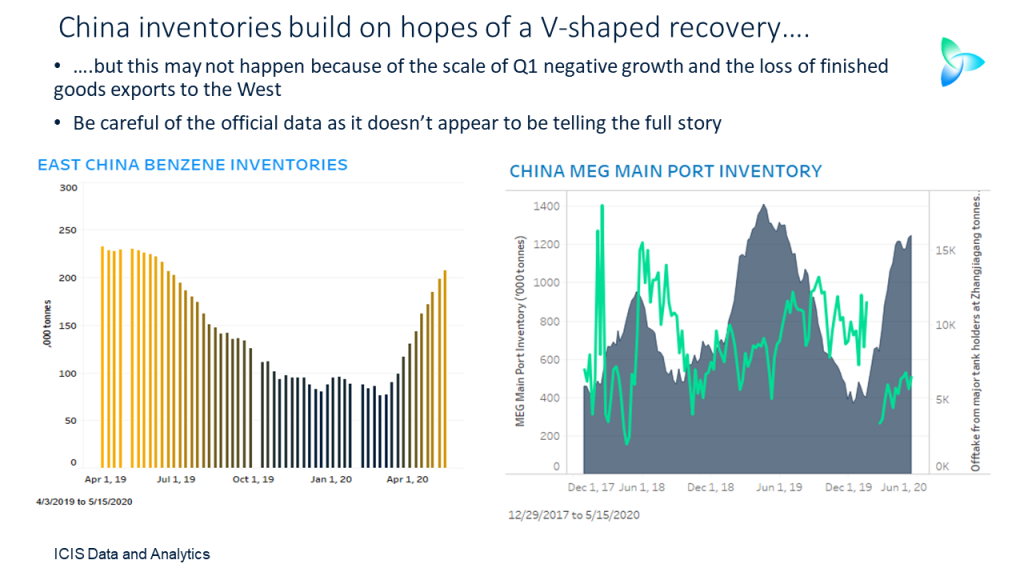 AS PETROCHEMICALS storage space in China fills up on the hope that the country can lead the world in economic recovery, here are some important statistics for you to consider: 91% of the more than 500 Chinese companies surveyed by the China Beige Book had reopened by late April, but only 42% were able to operate at more than half capacity.

What if the recovery in China is not all that has been made out to be by the official statistics? There is every chance, in my view, that the official numbers are portraying an overly optimistic picture of the strength of the local economy.

I therefore maintain that there is a significant risk of a destocking process in petrochemicals and polymers in China later in Q2, especially given that I also remain unconvinced about the sustainability of the rebound in oil prices.

You have always had to take about 10% off the official economic data to get a more realistic assessment of Chinese growth. But up until this year the direction was always upwards and so the only question was the extent to which China was growing. Now, as the statistics from the China Beige Book illustrate, it is not clear whether China will grow in 2020. Its economy might very easily contract.

Another equally important number from the China Beige Book, a bottom-up data analytics firm, is the 69% of Chinese executives who said in another survey that April maybe “as good as it gets” over the next six months.

Please note, however, that petrochemicals market sentiment could be temporarily buoyed by an announcement of major government infrastructure spending during this year’s delayed National People’s Congress, which starts on 22 May.

But I do not believe that any amount of spending can be enough to guarantee the kind of V-shaped recovery in China that some people are predicting, as the economic damage from the coronavirus pandemic is too great.

Here in detail is why the 69% of executives surveyed by the China Beige Book could be right when they say that April was the best month for the next six more months:

Net imports for some petrochemicals were down in Q1 this year versus Q1 2019 because of the fall in local demand in February-March and increased domestic production.

Benzene is the most prominent example where Q1 net imports were down 61% to 363,979 tonnes as local production climbed by 4% to 2.6m tonnes. This works out at a 14% decline in apparent demand growth versus our forecast that China’s 2020 full-year real demand will slip by just 1% compared with 2019 (real consumption is apparent demand adjusted for inventory distortions).

There however seems to have been a surge in benzene imports during April (the April import data will not be available until next week at the earliest) because arbitrage to the US is closed, demand in  other markets is weak – and, of course, because oil prices have gone up.

It seems likely that benzene producers and traders have also heavily targeted China in April to take advantage of the idea of a V-shaped local recovery. Buyers could have snapped up cargoes because the April macro-economic data was better than in March (the April data was expected to be better than March given that  China’s economy was largely shut down for the first two weeks in March).

Offloading unwanted benzene in China might have helped overseas steam cracker-based producers who are struggling to balance production. While ethylene and propylene demand has held up quite well because of demand for food packaging and other daily essentials, benzene demand has been significantly hit by the global collapse in consumption of durable goods. More than 50% of global benzene consumption is into durable end-use products such as high-impact polystyrene and acrylonitrile butadiene styrene, I have been told.

An indication that benzene imports are out-of-sync with actual demand was the 207,700 tonnes of inventories in shore tanks along the east coast of China during the week ending 15 May. This was the highest level since the week ending 6 June 2019.

China’s mono, tri and d-ethylene glycol (EG) imports rose by 7% in Q1 this year over the same period in 2019 to 2.8m tonnes. As we do not track local monthly production, the increase could have been the result of a fall in local output, along with cargoes booked before the full extent of the coronavirus crisis became clear.

As local production is forecast to rise by 9% this year with demand down by 2%, it looks as if the Q1 shipments were excessive. This appears to be confirmed by our assessment of China’s main port mono-ethylene glycol inventories. As of the week ending 15 May, stocks were at more than 1.2m tonnes which was again the highest level since the week ending 6 June 2019.

Imports of paraxylene (PX), another polyester-fibre intermediate, fell by 11% during Q1 to 3.8m tonnes. This is hardly surprising given that domestic production is set to rise by 14% this year following an increase of no less than 34% in 2019.

But Q1 PX imports may still have been excessive if local purified terephthalic acid (PTA) markets are anything to go by. Last week, PTA Inventories were estimated to be at slightly above 4m tonnes, more than monthly demand. PTA futures warehouse receipts had been rising as more cargoes were placed into futures warehouses because of a lack of firm demand in the physical market.

The weakness in China’s EG and PX is the result of the impact of the coronavirus pandemic on demand for clothing.

China accounts for some one-third of total global net exports of clothing, according to the World Trade Organisation. It also dominates exports of polyester fibres and fabrics, made from its imports of EG and PX, to clothing factories in countries such as Bangladesh, Sri Lanka and India. The factories then export clothing mainly to the West.

Global EG and PX producers face some very difficult operating-rate decisions as, even assuming a smooth emergence from lockdowns, Western clothing retailers have large stocks on hand, especially in the fast-fashion sector. Clothing factories in the developing world are also going out of business because of cancellation of orders from the retailers, which is causing further supply-chain disruptions.

In conclusion, China has every chance of enjoying a strong recovery in 2021. But until then it is essential to be realistic about the pace of China’s recovery during the rest of this year. Do not be misled by the official data, be sceptical, and accept that China will not be able to easily absorb your surplus production.

And be cautious about the pace of recoveries in every other country and region over the next 12-18 months. Remember that cash is king and so to preserve cash, minimise your risks of overproduction.