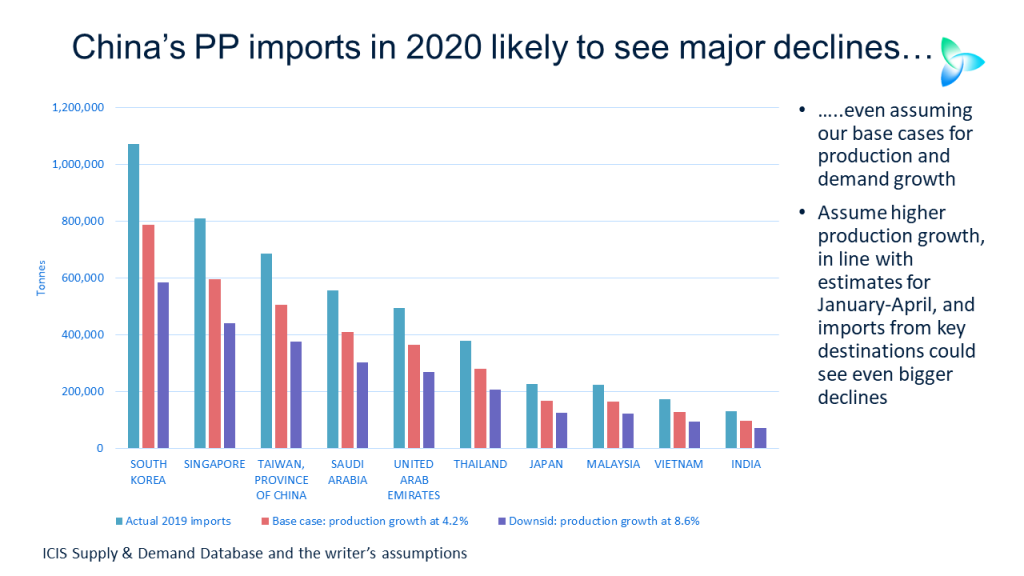 PLEASE DON’T say I didn’t warn you. China is rapidly moving towards polypropylene (PP) self-sufficiency. There is every chance that by around 2025 it will end up as a net exporter with self-sufficiency achieved in both homo -and co-polymer grades. Becoming self-reliant in co-polymers would fit with China’s strategic push up the manufacturing value chain as it tries to escape its middle-income trap.

What points to me being right is our estimate of an 8.6% year-on-year growth in local production in January-April 2020, with China Customs data indicating a 4.6% decline in net imports.

You might ask how this could be happening during a year when domestic demand growth will be weaker than in 2019 because of the coronavirus pandemic. But, as the point I made above about moving up the manufacturing value chain illustrates, standard supply and demand analysis will not help anyone forecast Chinese petrochemicals production.

What you also need to consider is that this is the last year of China’s 13th Five-Year Plan (2016-2020). Companies must ensure they hit production targets set by the government at the start of the Five-Year Plan. If they were way short of the targets at the beginning of this year, plants will have to run hard regardless of the state of demand.

An additional dynamic is the big collapse in global gasoline demand because of the coronavirus pandemic and the implications for availability of propylene from refineries, with propylene of course the feedstock for PP. We estimate that 30% of this year’s global propylene production of 107m tonnes will be from fluid catalytic crackers (FCCs) that also make gasoline. Gasoline consumption has cratered because of the reduction in transportation caused by lockdowns, forcing refineries to cut FCC operating rates.

I haven’t heard reports of significant shortages of PP resulting from lack of FCC propylene. But who knows what is around the corner? There is a slim chance of the emergence from lockdowns going entirely smoothly in every country and so gasoline demand will likely remain depressed for the rest of this year. And, of course, one also must consider the huge wealth and income losses caused by the virus and the impact on fuels consumption.

The same risk applies to naphtha supply from refineries to steam crackers. In Europe, a few weeks ago 33% of propylene supply from crackers was in theory under threat because of cutbacks in refinery operating rates. But I haven’t heard of major shortages of cracker-based propylene in any region, probably because demand destruction is greater than supply reductions.

Petrochemicals plants in general have long been run in China partly to maintain jobs in downstream washing machine, electronics and auto-components factories by ensuring  supplies of local raw materials.

This year the government has even more of an incentive to encourage PP plants to maximise output as a hedge against the risk of overseas supply disruptions due to reduced propylene availability: real unemployment may already be at least double the official number. More downward pressure on jobs is expected in the next 2-3 months with the arrival of the full effect of lost export orders.

Standard economic analysis does, however, point towards a further factor behind this year’s strong increase in PP production: the new wave of PP plants is far to the left of the cost curve as the plants are well-integrated, world-scale facilities located in state-of-the-art petrochemicals industry parks. Low oil prices have added a further boost to the competitiveness of China’s naphtha and refinery propylene-based PP capacity.

Imports sharply down even under the best of outcomes

As recently as early February this year, our excellent ICIS Supply & Demand base case for Chinese PP demand growth saw a 6% increase in 2020 over last year to demand of around 30.6m tonnes. At the time this was perfectly reasonable as the virus was only just taking hold in China, and it had not gone global.

Our revised base case sees demand growth at just 2% to consumption of 29.6m tonnes. This would be the lowest percentage increase since 2008 when the market declined by 2%. This is again a sound position following the announcement, during the delayed National People’s Congress meeting, that China was not setting a target for GDP growth in 2020. This is the first time in 30 years that China has not set an annual growth target which reflects the depth of the country’s economic problems.

Assuming that we are right – and assuming our base case for annual production growth of 4% is also correct – this could result in this year’s total imports falling to just 3.8m tonnes from last year’s 5.2m tonnes.

(For the purposes of these forecasts, I assume that China’s big PP trading partners win the same percentage shares of the China market in 2020 as they did last year.)

There is a good argument to be made that China will do its very best through more infrastructure spending to achieve positive GDP growth. The well-respected Caixin magazine is predicting 2020 GDP growth of 1.5-2%. Fiscal stimulus will be the priority this year rather than monetary stimulus because of the heavy debt burden left behind by monetary stimulus.

So, let us stick with our base case view that PP demand growth will be roughly in line with GDP at 2% for my downside scenario for imports, which you can see in the far right-hand bars on the above chart. But these bars assume production growth for the rest of this year is in line with the 8.6% we saw in January-April, based on the arguments I have presented above.

Total imports under this scenario fall to just 2.8m tonnes and:

I could easily be wrong. But this post at the very least further underlines the value of our ICIS Supply & Demand Database as a planning tool. Everyone needs a base case around which we can provide customised, and continuously updated, downside and upside scenarios for production and demand, across every product in every country and region.

And the China PP story, which is similar in several other petrochemicals, emphasises the risks for companies over-exposed to the China market. Our industry needs to rethink its strategy as China moves further towards self-sufficiency not just in PP, but also in other products such as paraxylene and styrene. The solution is in short here to switch your focus to value from volumes. I shall discuss this approach in detail in later posts.

PREVIOUS POST Coronavirus, impact on the developing world and the scale of demand losses
NEXT POST Polyethylene producers must avoid repeating the mistakes of Q1