China PP Imports To Halve By 2025 Or Turn Into Exports 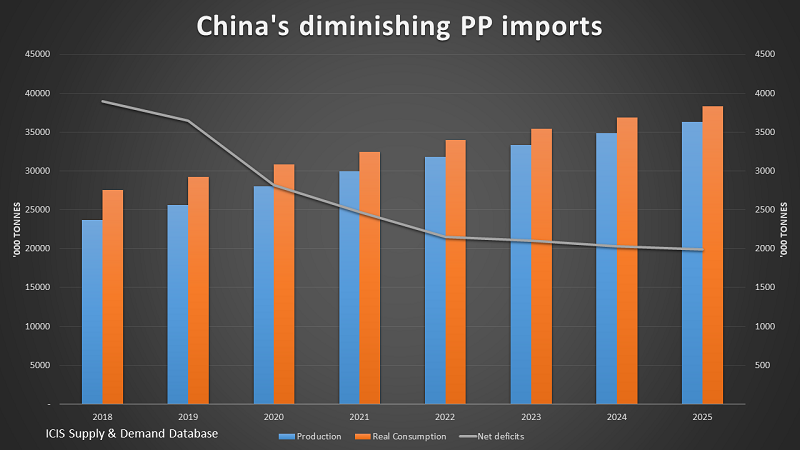 CHINA IS accelerating its drive towards at the very least much greater PP self-sufficiency by 2025.

There is also a credible second scenario where China becomes a significant exporter by that same year, most logically to the Asia and Pacific (A&P) region due to proximity and what will be stronger geopolitical and economic links.

This second scenario would be nothing short of a hammer blow to exporters in the Middle East and other exporting regions outside China, as A&P is set to see more than 70% global import growth between 2018 and 2025.

In April this year, the ICIS Supply & Demand database estimated that China’s net PP imports (imports minus exports) would be at 4.2m tonnes in 2025, up from 3.7m tonnes in 2018.

But our excellent teams of analysts and consultants in China and in Europe have carried out a revision of these numbers, based on newly announced PP projects and our belief that China will run its PP capacity at higher operating rates than was earlier anticipated.

This will result in net imports totalling only around 2m tonnes in 2025 (see the above chart). With actual net imports in 2017 at 4.4m tonnes, this would mean a 55% decline.

The latest updates to our Supply & Demand database also models the impact of this major shift on global PP deficits:

What if actual operating rates are even higher? And/or what if some of the projects we list as speculative end up coming on-stream? The end-result might be China swinging into a net export position by 2025. This was a distinct possibility even based on our April data.

The A&P region includes India as well as Southeast Asia. India is a member of China’s Belt and Road Initiative (BRI), as is all of SEA.

If the world continues to split into rival trading blocks, (the US and its allies versus China and its allies) China would very likely export PP surpluses to A&P. This would also make logistics sense as China is close to the region.

The three biggest deficit countries in A&P are India, Indonesia and Vietnam, with Vietnam already a target for the as yet very limited China export trade.

There are other scenarios, of course. A&P may itself push towards greater PP self-sufficiency, especially India where we see a bit increase in net deficits by 2025.

This could deter China from shifting to PP exports given the lack of export opportunities elsewhere. China might as a result decide to continue to import some volumes of PP, with most of the imports coming from the BRI region which also includes the Middle East.

There are many other potential outcomes that our ICIS Consulting team can model for you through tailor-made scenario work.

My view is that China will eventually become a net exporter of PP, quite possibly by 2025. This would fit with the development of its economy. New petrochemicals and polymers capacity in general at modern, highly integrated sites is a key part of efforts to escape its middle income trap.

And don’t assume that this would only apply to homopolymer imports. Pushing very aggressively towards copolymer self-sufficiency is again strategically logical for China because of the higher-value nature of copolymer manufacturing.

I don’t see feedstocks as an issue because of again the BRI. As I said, the Middle East is in the BRI, and the region has of course ample crude, naphtha and propane. We are also moving to a world of abundant oil because of the shift to electric vehicles.

We also shouldn’t forget the coal-to-olefins (CTO) process. Whilst CTO capacity growth is slowing down in China right now on cost and environmental concerns, over the long term the process could well be seen as a key means of a.) Keeping coalmines open in western China, and b.) Creating lots of jobs, and so economic growth, downstream of new PP plants in western, less developed China.

The PP world is, I said, is being turned on its head because of events in China. And this blog post only looks at the disruptions taking place on the supply side of the story. Even bigger disruptions are occurring in PP demand.