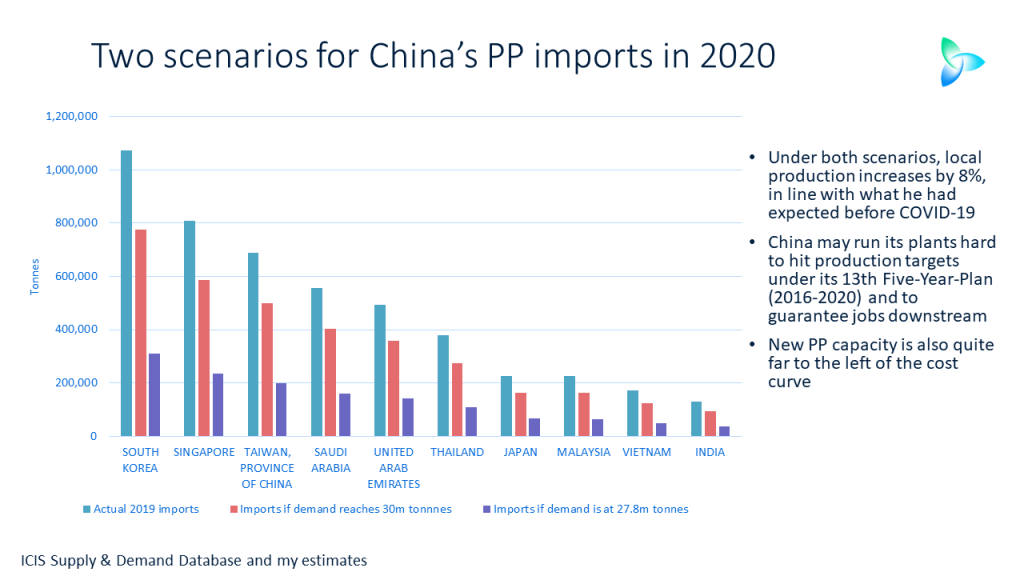 SOMETIMES you can forget what you already know. This was the case in March when I was speculating that Chinese petrochemicals and polymers production might be lower than we had anticipated before COVID-19.

Not so according to a very good colleague in China and some of my industry contacts. They have pointed out that this is the last year of China’s 13th-Five-Plan (2016-2020) which means that the state-owned petrochemical producers have government- set production targets to meet.

Another thing to consider is that running local plants at high operating rates is a way of guaranteeing employment during a period of weak economic growth.

This doesn’t apply to the petrochemicals plants themselves as they will employ the same number of people whether they run at 80% or 90%. It is instead about jobs downstream in electronics, auto and washing machine factories etc.

Running at low rates runs the risk of imports not being enough to maintain finished-goods output because of the chaos in overseas petrochemicals markets. Who can say given logistics and feedstock availability uncertainties that overseas producers will be able to ship as much to China as China needs?

What I’d forgotten is that standard supply and demand analysis will only get you so far in understanding petrochemicals production levels in China. The industry is as much a political and social as a profit-making tool.

On profits, China has added large amounts of world scale and very well integrated capacity located in new petrochemicals industry parks where logistics are excellent and utilities are shared. Its new plants are quite far to the left of the cost curve.

We thus end up with charts such as the one above that shows two outcomes for Chinese PP imports in 2020 versus actual imports in 2019.

The first scenario is built on our base case of Chinese PP demand reaching 30m tonnes in 2020 – 3% higher than 2019. The second outcome is my downside where demand is only 27.8m tonnes which would be 4% lower than last year. Under both scenarios production rises by 8%.

Under our base case of demand reaching 30m tonnes, I estimate that imports would fall to 3.8m tonnes in 2020 from last year’s 5.2m tonnes (this is calculated by taking local production away from demand to get net imports, and, for argument’s sake, adding back last year’s exports of 405,108 tonnes).

The global PP industry has long been too dependent on China

Using the same approach for my downside view on PP demand, which I must stress is just my personal view, imports decline to just 1.5m tonnes.

As you can see, when we break this down to imports from individual countries, the results, even if demand hits 30m tonnes, are disturbing. These numbers were calculated by assuming the major overseas players in China’s PP market win exactly the same percentage shares of total imports in 2020 as in 2019. For instance:

This was, I’m afraid, pretty much a disaster waiting to happen for the global PP industry because of its overdependence on China. It wouldn’t have taken an economic event in China as big as COVID-19 to expose this overreliance.

Before the crisis began, reflecting a pattern that’s been in place for many years, we had forecast that China would have accounted for 41% of total global net imports of PP in 2020 amongst all the regions and countries in the world in net import positions. This would have been the biggest single percentage share. Europe, including Turkey, would have been in second place at 27% and Asia & Pacific in a distant third at 12%.

And as I’ve been stressing for several years, China is pushing hard towards complete PP self-sufficiency, at least in homopolymer grades.

Under the circumstances of just a slowdown in Chinese economic growth, the PP industry would have been able to make up some lost ground by switching its focus to other markets. Not now of course because demand is struggling everywhere.

The decisions you make from now onwards…

…can enable your company to emerge as a Winner in these very difficult circumstances.

It might seem strange to talk about Winners. But if you had listened to my advice on a Q2 destocking process as oil prices fell, you would already be well on the way to the relative success of losing less money than your competitors.

What’s of equal importance is to accept that there will be no significant recovery in petrochemicals markets for at least the rest of 2020, in my view. There will be pockets of strong demand in serving food packaging and medical needs. But just pockets.

The key will be running your plants efficiently in a much weaker demand environment whilst continuing to focus on the one thing that will matter more than anything else: Cash is King.