China rapid rebound promises another great year for petchems, but beware of the fault lines 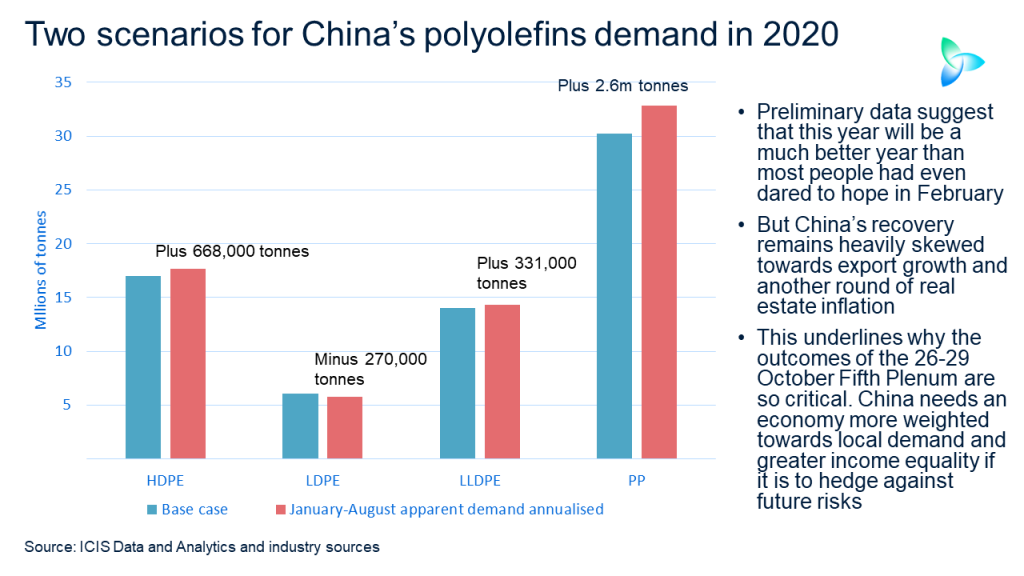 IT helped immensely that as the rest of the world was shutting down, China’s factories were coming back on stream. This allowed China to corner global markets for face masks, other personal protective equipment and pharmaceuticals. What was also a big plus for China was that it already had large global stakes in these manufacturing chains.

This was Phase One – China’s ability to meet global pandemic needs during a period when the rest of the world’s production was constrained. Even though lockdowns have eased overseas, labour shortages due to renewed outbreaks threaten further disruption to overseas manufacturing.

Phase Two of China’s 2020 export boom was the increase in employees working from home globally. Converting homes into offices has boosted Chinese exports of electronics and office furniture, which is great news for polypropylene (PP), polyurethanes and polyester demand etc. China is again benefiting from its global dominance of these manufacturing chains.

The data therefore begins to make sense. China’s year-on-year exports in September were up by 9.9%, marking the fourth month in a row that exports had climbed.

Shipments of home electric appliances were up by a staggering 42.9% in September to a value of $6.5bn, according to Trade Data Monitor (TDM). Exports of textile, yarn and fabric products (including face masks) were up by 36% to a value of $9.6bn, the data showed.

The import picture also looked strong in September as overall imports increased by 13.2%. You might see this as pointing to a strong recovery in Chinese consumer spending. However, the context behind the import data is very important.

The September rise in soybean, copper, grains, iron ore and meat imports must be put into the context that prices were still much lower year on year. China stocked up while costs were low.

This has been the case in crude oil since April. Oil imports have been at record-highs, despite what has been weaker year-on-year domestic transportation demand.

The bargain hunting argument is supported by the September import data for oil. TDM reported that while imports increased by 17.6% in volume to 48.5m tonne in September, imports declined 15.3% by value to $15.9bn.

There is another theory as to why China’s September imports were so strong: concerns over increasing trade protectionism in response to the growth of China’s exports.

“China is concerned that if Joe Biden were to lose next month’s presidential election, another round of trade-war tariffs could well happen. And if Biden were to win, tariffs may not be entirely off the table if the US economy continues to struggle and its trade deficit with China further widens,” said one of my very long-standing contacts in Beijing.

It is also important to note that September imports of high-tech products increased by 19.9% to $70.6bn, once again according to TDM. These are the components that China needs to manufacture electronics for export.

We also need to delve beneath headline industrial production growth of 6.9% in September. Most of the growth was in technology-related industries. Output by industrial robots rose by 51.4%, with integrated circuit board production jumping by 16.4%.

Less-than-eye-watering growth in other areas of industrial production indicate domestic demand is still lagging behind pre-pandemic levels. September retail sales were up by 3.3%, a very good acceleration from their 0.5% increase in August. However, in January-September, retail sales were still down by 7.2% on a year-on-year basis.

Domestic spending during this year’s eight-day National Day holidays was down 30% compared with last year even though the holidays were one-day longer, and there were no options to spend overseas because of travel restrictions.

This points towards China’s heavy dependence on a new round of real-estate inflation as a major driver of its recovery, along with exports of the things we need for our pandemic lifestyles.

Now we can make sense of yesterday’s announcement by China that its year-on-year Q3 GDP growth had increased by 4.9%, a big acceleration from the 3.3% increase in the second of this year and a million miles from the 6.8% decline in Q1 growth.

We must also consider this essential reality: official GDP numbers are invariably inaccurate, and, since 2012, have been more inaccurate than before. Capital Economics estimated that since 2012, official GDP growth numbers had been exactly in line with official targets set at the start of each year.

This makes China unique. No other major economy in the world releases official GDP numbers and doesn’t revise the data as new statistics emerge. The US, for instance, revises each quarterly GDP number multiple times. Think of this in the context of the complexity and opaqueness of China’s economy.

Capital Economics estimated that between 2012 and 2019, China’s cumulative GDP growth was 33% rather than the official 48%. In Q1 this year, the transportation component of GDP was resilient despite the impact of the pandemic, they added. This component is now baked into the official 2020 GDP numbers because no revisions take place.

The impact on polyolefins

All the above was done with a little time on Google and talking to a few contacts. This is not rocket science. You don’t have to achieve the equivalent of building an inter-planetary rocket to understand that there are fault lines in China’s economic recovery.

But the year so far has been awesome for Chinese polyolefins demand given the scale of the global pandemic.

And, despite the fault lines, the momentum from strong export growth and a rebound in local consumption will very likely make the whole of 2020 much better than many people had expected back in February, including me.

This is the data on polyolefins in detail (also see the above slide):

Please take this polyolefins data with as large a pinch of salt. Estimates of local production are exactly that, only estimates. Our final assessment of domestic output may end up lower for January-July. Production and net imports may also slow down during the rest of 2020.

Still, without doubt, this year will, as I said, end up being an awful lot better than just about everybody had expected when the pandemic first took hold in China in February.

The big risks for Chinese growth

The three big areas of risk for the Chinese economy, which are evident from section one, are as follows:

Will China be able to rise to its challenges? History suggests yes, but you still need multiple scenarios for outcomes that will largely shape the fortunes of the global petrochemicals industry. Crossing your fingers and hoping for another 20 years of economic miracles is hardly a strategy.

PREVIOUS POST Plastic rubbish: the pandemic is increasing rather than reducing the pressure for change
NEXT POST Developed world polymers demand: layer after layer of new complexity