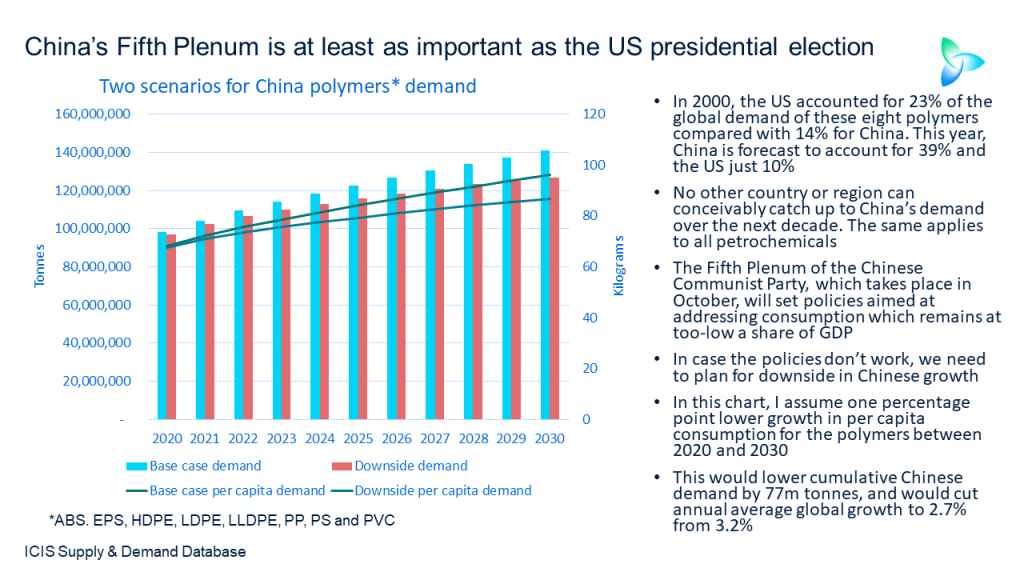 IN THIS Western-centric world, a huge amount of ink is split over the consequences of US presidential elections and this year’s the poll, which as always takes place in November, is no exception. The result will of course have huge global economic and geopolitical consequences.

But I believe that the outcomes of China’s Fifth Plenum in October is at least as important, if not more important, than the outcomes of November’s presidential poll. And yet there is far less spillage of ink on the former event. Try a few Google searches and you will see what I mean.

Our data show that, without considering how the political decisions taken by the US and China will affect other countries and regions, there is no contest whatsoever. China’s Fifth Plenum, when Communist Party leaders will get together to decide the details of China’s next Five-Year Plan (2021-2025), is way more important.

When you put all these polymers together, you will find that the US accounted for 23% of global demand in 2000 versus 14% for China. By 2003, China had overtaken the US to become a bigger consumer – and the biggest consumer amongst all the countries and regions. In 2020, we estimate that the US will account for just 10% of global demand versus China’s 39%.

What is at stake from the outcomes of the plenum is whether China’s share of global demand will at least be maintained at 2020 levels, and, ideally, continue to grow. If China’s share isn’t at least maintained, there are no rational scenarios under which any other country or region can fully replace China’s role in driving global petrochemicals growth for these two reasons:

Also remember that the rest of the developing world is, quite literally, light years behind China in terms of petrochemicals consumption. This is not an opinion, but instead based on the data. India, for instance, made up 2% of global demand for the eight resins in 2000 versus China’s 14%.  This year, we forecast that India’s share will have only increased to 6% compared with 39% for China.

There is no conceivable statistical scenario where countries like India, or even whole regions such as Africa, can catch up to China over the next decade.

So, what is at stake during the Fifth Plenum? What are the polices that should be adopted if China is going to at least maintain its role in global petrochemicals demand? The meeting isn’t obviously the end of the story. The right policies will then have to be effectively implemented over the next five years and beyond.

It is intellectually incoherent to talk about China’s rising middle classes guaranteeing the creation of a billion-plus Western-style consumers. Sure, it might happen, but this is far from guaranteed. China has a long way to go to achieve the average levels of personal wealth that prevail in the West.

You don’t have to take my word for it. Instead, take the words of China’s Premier, Li Keqiang, who said during a conference last month that 600m of China’s 1.4m population lived on a monthly income of just yuan (CNY) 1,000 (US$146). Even accounting for purchasing power parity, this is extremely low.

Even after four decades of 10% growth per year, China’s per capita income was less than a quarter of the high-income country average at market exchange rates and less than a third in purchasing power parity terms, wrote Michael Pettis, professor of finance at Peking University’s Guanghua School of Management, in an article for the Carnegie Endowment for International Peace.

Cao Dewang, the Chinese entrepreneur and chairman of one of the largest glass manufacturers in the world, said in the documentary American Factory, that between 900m and 1b Chinese citizens “don’t have any consumer power”.

This will leave some of those who have visited high-end shopping streets in Shanghai and Beijing scratching their heads. But Gucci and Prada stores don’t represent the economic reality for the majority of people in China. Yes, there are many millions of super-rich urbanites. But for migrant workers in the big cities who lack Hukou, or full residency status, life is very different, as is the case for the rural poor.

China’s economic growth model has long been focused on low labour costs and excellent infrastructure combining to enable competitively priced exports. Even with the rise in labour costs resulting from an ageing population (see my later section on demographics), China still has major labour cost and supply-chain advantages over export competitors.

Its dominance in nearly all manufacturing chains has also given it, as I discussed last Friday, a natural hedge against the impact of the pandemic. While its exports of shoes have, for instance, collapsed, there have been more than compensatory surges in shipments of medical devices and the electronics that people need to convert their homes into offices. This explains China’s robust petrochemicals demand growth in January-July this year.

But dominance of manufacturing comes at a cost to domestic consumption, as Pettis again said in this Financial Times Alphaville article: China’s export ‘competitiveness’, as former Alphaville writer Matt Klein and I explain in our recent book, Trade Wars are Class Wars, depends on ensuring that workers are allocated, whether by wages or the social safety net, a very low share of what they produce. China’s export strength, in other words, depends, at least in part, on the low share workers retain of what they produce.

Here is the dilemma, again according to Pettis in the same FT article: China can only rely on domestic consumption to drive a much greater share of growth if workers get a bigger share of what they produce, so the process of rebalancing would undermine China’s export competitiveness.

This next point is very sensitive, but ,if we are going to build credible scenarios for petrochemicals growth in China, this issue must be addressed. Pettis argued that if Chinese consumption was to be broadly in line with that of other developing countries, ordinary households must recover at least 10-15 percentage points of GDP at the expense of businesses and the wealthy.

“But hold on, come on, this doesn’t reflect all the data we get out of China on the growth of local consumption,” you may counter.

Well, growth has clearly been stellar, as our data on the six big resins confirms. But as Caixin magazine wrote in this article: China’s investment rate is too high, more than twice the world average at 43%, and the consumption rate is too low, far below the world average, at 39%. In other words, capital allocation has to date favoured businesses, especially the big state-owned businesses, according to Nicholas Lardy in his book, The State Strikes Back.

This leads on to another problem that China faces, which is that all this investment has led to overcapacity. This is reflected in some petrochemicals and polymers. For example, PVC capacity as a percentage of local demand was at 106% in 2000 but is forecast to reach 135% this year. In purified terephthalic acid, capacity over demand was 47% in 2000. In 2020, we expect this to reach no less than 144%.

Downstream into finished goods is no different: China makes 10bn hats, 10bn pairs of shoes, 30bn pieces of clothing as well as 200m tablets and portable computers each year, according to Teng Tai, the director of a Beijing-based private think tank, in an article in the official Securities Times. He added that it was impossible to sell these volumes in the domestic market.

If China boosts domestic incomes by too much then export sales will suffer through loss of competitiveness as ordinary workers gain a greater share of GDP. But if it doesn’t sufficiently boost domestic incomes, China will anyway face a constant decline in export sales as Western societies continue to age.

The 55-plus age group, which is rapidly expanding in the West, has already bought most of the things it needs. It is also living in reduced circumstances as more and more people move into retirement and so depend on pensions.

This provides another link to one of China’s challenges in raising domestic consumption – a pension system that is widely viewed as inadequate. The same applies to healthcare provision. A great way of unlocking rural wealth would be to give farmers full ownership of land. But how would this sit with the Communist Party’s political system?

Getting old before it is rich

The 10,000lb gorilla sitting in the corner of the room might well be China’s demographic challenges, which fellow blogger Paul Hodges and I have been highlighting since 2011.

And as Nicholas Eberstadt, a political economist, wrote in a 2018 American Enterprise Institute paper:

For richer Western societies that are also ageing, these kinds of demographic challenges are big enough. But for China, which as the data show remains a relatively poor country – and which also confronts high debt levels left over from its heavy focus on investment – they are even greater. As the old cliché goes, China is in danger of becoming old before it is rich.

Scenarios for polymers growth over the next decade

Never, ever underestimate China. Few people who have shorted China over the years have made money. Its economic management has to date, without doubt, being extremely good and it is right to laud achievements such as its success in lifting hundreds of millions of its people out of poverty. GDP growth since the 1990s has been spectacular, as has the rise in in average incomes from a very low base, even though average incomes lag a long way behind the West.

But, quite clearly, there are significant challenges ahead, which, as I said, make the outcomes of the October Fifth Plenum so important. Every petrochemicals company must build scenarios around what might happen to Chinese demand.

So, I took our base case forecasts for per capita growth in the eight synthetic resins in 2020-2030 and, for argument’s sake, reduced the average across the eight resins by one percentage point. Instead of per capita consumption growth at an annual average of 3%, I took this down to 2% in my downside. The results are detailed in the above chart. In summary here:

We can help you with this essential scenario work, so please contact me at john.richardson@icis.com.