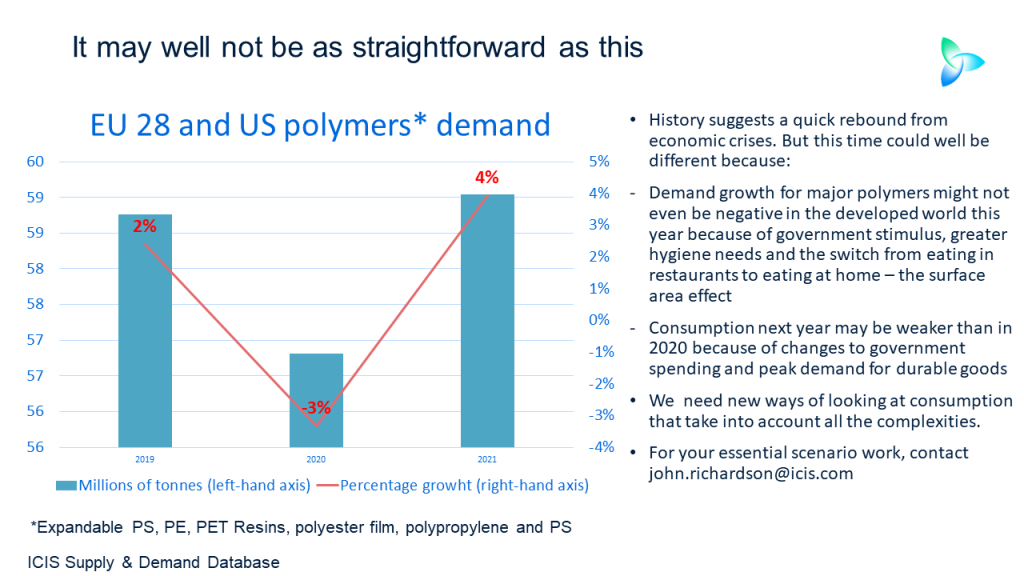 THE PROPOSITION that petrochemicals and polymers demand in the developed will see a V-shaped recovery in 2021 assumes two things. One is that demand will have fallen in 2019 versus last year and the second is that the worst of economic times are behind us. There are so, so many challenges to these assumptions.

On the first assumption, the on-ground market intelligence from our ICIS Pricing team points to surprisingly resilient demand across several of the end-use applications for the major polymers.

Demand for polyethylene (PE), polypropylene (PP), polystyrene (PS) and polyethylene terephthalate (PET) resins that go into single-use applications has been strong because of the support for low-paid workers provided by government stimulus. Increased hygiene needs and the shift from eating in restaurants to eating at home are other factors.

Extra unemployment payments in the US, job furlough schemes in Europe and the JobKeeper scheme in my home country, Australia, have resulted in very different demand dynamics in 2020 compared with 2008-2009.

Some lower wage workers have found themselves better off than they were during the Global Financial Crisis when home repossessions, credit shortages and high unemployment ate into demand for even the most basic consumer non-durables. Recent data for the US showed that the lowest paid workers were also better off than they were before the pandemic.

In 2008, the size of the average shopping basket went down in Europe and the US amongst some low-paid workers. But this year, the opposite dynamic has been reported. Low-income groups are said to have spent more in supermarkets, especially on small luxuries such as chocolate and ice cream.

This raises the question about the impact on US supermarket sales following the expiry of the old stimulus scheme. The extra $600 unemployment cheques per person came to an end up at the end of July. The old stimulus scheme also involved $1,200 one-off payments to individuals.

US Congress remains locked in dispute over a replacement programme. There is a risk that no deal will be passed until after the November presidential election. A new deal seems inevitable at some point, but the issues will then be the breadth and scale of the new scheme and so its effectiveness.

In Europe, our pricing team report that over the last few weeks, consumer spending has been negatively affected by anxiety over the future of job-furlough schemes. A lot may rest on again the breadth, scale and effectiveness of new government schemes in Europe that replace the furloughs.

Developed-world governments will, I believe, be able to afford further major stimulus as the cost of servicing public debt looks set to remain rock bottom for several years to come. What will instead matters will be the politics of getting deals over the line, and, as I said, how good the deals are in staving-off the long-term effects of the pandemic.

But even if governments get it very badly wrong, increased hygiene needs are sadly, in my view, here to stay. Despite political hype around a vaccine or vaccines, I believe it will be years before we achieve levels of immunity that will allow us to return to our old lifestyles. And when this happens, the fear factor is likely to maintain demand for face masks, bottles of disinfectant and disinfectant wipes.

Then there is the surface area argument. My ICIS colleagues in the US have been told by local PE producers that this is the biggest reason why domestic demand growth has been so surprisingly strong this year.

When we were going to restaurants in droves, the packaging required to deliver the food to our tables was smaller in total surface area, and so volume, because restaurants use big tubs of yoghurt and ice cream, large trays of meat and big pallets of vegetables.

But in supermarkets, where the demand is much greater than before because people are eating much more time at home because restaurants are shut, food has to be packaged in smaller amounts for individuals and families – ergo extra demand for polymers.

The US PE demand story quite remarkable. In 2008, high-density PE (HDPE) demand collapsed year-on-year by 13%, low-density PE (LDPE) consumption tumbled by 12% and linear-low density PE (LLDPE) demand was down by 16%. These were the biggest percentage demand declines since our records began in 1978.

Because of the trends highlighted above, our base case forecasts for this year are nowhere near as bad. We expect HDPE demand will be down by 2% with LDPE and LLDPE both 1% lower. Even this relatively extremely good performance looks likely to be exceeded, as one of our top pricing editors, Zachary Moore, writes in this end-September ICIS Insight article:

According to data from the American Chemistry Council and Vault Consulting, domestic demand in the US and Canada over the first eight months of 2020 relative to the same period of 2019 is flat for HDPE, up 2.8% for LLDPE and up 5.1% for LDPE.

As with greater hygiene needs, I worry that the surface area trend will last for a long time because we are nowhere close to getting on top of the pandemic in the West. This has been UK over recent days with the renewed closure of restaurants and pubs.

To want extent has the good demand been the result of government spending, versus hygiene needs and people eating more at home and less in restaurants? Nobody has the faintest clue, I am afraid. All we have to go on are anecdotes and numerous disparate, unconnected data points.

I am so bored, I am even going to do the wallpapering

I hate DIY with a passion bordering on religious conviction, largely because I am so bad at it. My partner, quite sensibly, won’t let me anywhere near a paint brush or a spanner, an outcome I have been more than happy with for many years.

But spending on DIY, or home improvements as they are called in the US, has risen very sharply in the rich world since the pandemic began. This has supported demand for paints and coatings and the phenolic resins that go into construction materials etc. People have been so bored during lockdowns that they have even resorted to the dreadful, agonising chore of wallpapering walls.

Once homes have been redecorated, once every plug has been replaced, once new patios have been completed and new garden furniture has been bought, that is it for a while. Demand peaks and declines.

The same applies apply to another aspect of our pandemic lifestyles, converting our homes into offices. This is a major reason why, switching to the subject of China, its polymers demand in 2020 has been so much better than had been expected, as China supplies most the world’s laptops, computer monitors and office furniture.

But even though petrochemicals manufacturers in the developed may have enjoyed limited direct benefits from the conversation of homes into offices because China dominates the global electronics and furniture manufacturing chains, we have to consider the indirect benefits. Booming sales at electronics and furniture stores have led to improved profits, more hours worked my employees and greater job security. These are all positives for wider economies.

Back to the main point, though. As with home improvements, peak conversion of homes into offices will at some point arrive, nobody knows when because you only need to buy a new computer one every few years.

Prospects for the automobile sector adds yet more layers of complexity. In the US, because people cannot travel overseas and because of very competitively priced purchasing and leasing schemes, demand has picked up over the last couple of months. It can be cheaper to buy a new car than buy a set of new tyres for an old car.

But an important driver, if you can excuse the pun, of US autos demand is purchases of vehicles by hire-car companies. As the aerospace sector has virtually imploded, and as many people hire cars when they arrive by plane, what does this mean for overall US autos demand?

In Australia, ever since lockdowns were eased across most states, which was from April onwards, automobiles have been figuratively flying out of showrooms – because, again, Australians cannot fly anywhere.

I could go on and on, but I won’t. There are many more layers of complexity and uncertainty to demand that are too numerous to cover in one blog post. In short here, these include political uncertainty ahead of and after next month’s US presidential election and renewed lockdowns in the US and Europe.

What is as clear as the purest crystal, however, is this: You need other scenarios for polymers demand in the developed world versus our base case V-shaped recoveries. Please contact our analytics and consulting teams for support in this essential scenario work via my email – john.richardson@icis.com.

Equally as clear is that GDP no longer works as a measure of demand growth. It has never been that good a measure, but pandemic complexities have further undermined its reliability. What is also very evident is that you need very solid, very good bottom-up demand models to work out what might happen in 2021 and beyond.

PREVIOUS POST China rapid rebound promises another great year for petchems, but beware of the fault lines
NEXT POST Debate about refinery closures, re-configurations a harmful distraction for the petrochemicals business