Home Blogs Asian Chemical Connections Why history, culture and politics will give you the petrochemicals answers you need 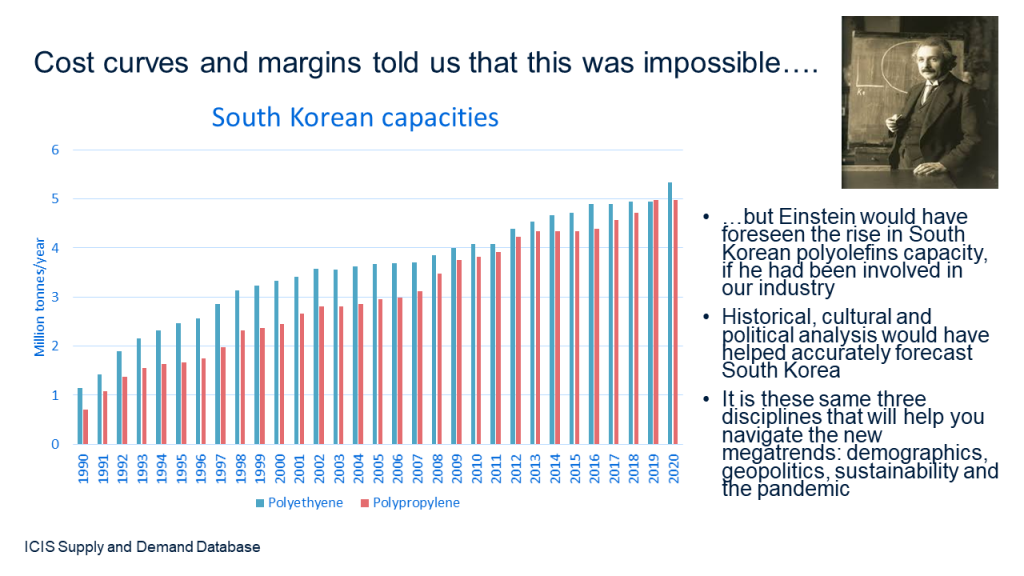 Hear, hear. So it goes with petrochemicals markets, to paraphrase the great science fiction writer, Kurt Vonnegut. A constant temptation is to try and reduce the behaviour of our industry to mathematical formulas when most of the behaviour of this industry cannot be reduced to any sets of numbers.

Let me give you an example from history to prove my case.

South Korea’s “all of society” approach to petrochemicals

South Korea’s petrochemicals industry took off 1980s, driven by state investment that did not only consider feedstock advantage and the economic boundaries defined by a petrochemical complex or a refinery-to-petrochemical complex. In fact, cost-per-tonne economics were barely on the mind of the country’s Ministry of Finance (MOF).

The MOF instead wanted to create jobs for people in downstream washing machine, electronics and auto factories through the guaranteed supply of local raw materials. The number of new jobs that were going to be created couldn’t be predicted with any reasonable degree of accuracy. In fact, most of the time, nobody bothered with forecasts as it was accepted that supply security was just a good thing by itself.

Then came something called regulatory capture, the period from the 1990s onwards when the leaders of the chaebol, the big industrial conglomerates, were able to influence the approvals process. Government approval was won for petrochemicals plants that demand forecasts said were unneeded. The old saying was, “if you owned a chaebol and had an auto plant, you wanted a petrochemicals plant as well.”

But, despite the claims of overcapacity and cracker shutdowns (with the South Korean industry said to be further hampered by South Korea’s need to import all its oil and gas), the South Korean petrochemicals industry has been extremely successful.

What the mainstream consultants missed was the tremendous hard work and ingenuity of the South Koreans. They also overlooked that the fact that defining the economic boundary as either a petrochemicals plant or a refinery-petrochemicals complex simply doesn’t work in the South Korean context.

Yes, there have been some major petrochemicals-specific competitiveness issues that have had to be fixed, for instance, the changes in ownership that occurred after what South Korea rightly calls the “IMF Crisis” in 1998 (not the Asian Financial Crisis because I share the view that it was IMF policies that made the economic problems in South Korea  a lot worse than they should have been).

But these disadvantages have been fixed not just at the individual company or plant level. The South Korean government has, for example, supported petrochemicals and other industries through successfully pursuing free trade agreements (FTAs), the most recent being South Korea’s membership in the Regional Comprehensive Economic Partnership (RCEP).

The huge, long negotiated trade deal, which was signed on 15 November, will give South Korea even better access to the critical Chinese market. Its access to China had already been improved by the China-South Korea FTA that came into effect in 2014.

Those who accurately forecast the continued success of the South Korean petrochemicals industry adopted what I call an “all of society” approach. They understood local history, culture and politics. Sorry to sound like a big head, but I place myself amongst the winning analysts here.

Understanding local history, culture and politics involves a great deal of thinking about intangibles that cannot be built into any spreadsheet. But this kind of understanding also leads to new data sets, such as studying the role of present and future FTAs in shaping petrochemical trade flows. We need to conduct such a study into the RCEP.

China’s “all of society” approach

Let us also look at the South Korea-China relationship from a Chinese perspective. China wants to move closer to South Korea because it is a highly developed economy.

The RCEP presents China with a very interesting opportunity in this respect.  As The Economist writes, the RCEP breaks new ground in harmonising the “disparate rules-of-origin provisions in ASEAN’s various FTAs, and setting  regional-content rules so that intermediate goods can be sourced from any of the 15 countries.”

High value semiconductors might flow from South Korea to China in greater quantities. The new rules of origin mean China will be able to export finished electronics to the RCEP’s 15 member countries, which represent 30% of the global economy, at reduced tariff rates. This may help to mitigate the damage done to its supply of semiconductors because of new US export restrictions, one of the outcomes of the growing US-China split.

Let’s extend this kind of thinking to petrochemicals. Why, given its split with the US, which seems likely to continue under the Biden administration, would China want to buy any of its petrochemicals from the the US, regardless of the cost efficiencies of US plants? Why shouldn’t China instead buy more from South Korea, especially now that the two countries have moved closer together as a result of joint membership of the RCEP?

Ethane feedstock advantage may matter not a jot in the coming years as the US and China move further and further apart. The US has made some headway in the China market this year. But I would not be surprised if, eventually, no petrochemicals are exported from the US to China.

Let me give you one more example of China’s “whole of society” approach. This illustrates how cultural, social and political factors can end up shaping plant economics:

Climbing out of our silos

Gillian Tett’s brilliant book on the Global Financial Crisis, Fool’s Gold, is once again instructive here. She talked about how regulators, financial analysts, hedge funds and big banks all lived in silos, with the walls separating different areas of knowledge. Because all these institutions couldn’t see above the walls of their silos, they missed the signs that a crisis was coming.

The same applies to the petrochemicals business, which is why I believe you need to employ experts on local history, culture and politics – and also crucially today, geopolitics as well, due to the end of the post-Berlin Wall period of benign global markets.

This kind of analysis, as the examples of South Korea and China so clearly show us, has always been essential.  But now it has  become even more important as we move into a world of much greater ambiguity and uncertainty due to the four new megatrends, which, in no order of importance are: demographics, sustainability, geopolitics and the pandemic. Watch this space for “whole of society” analysis of the megatrends.