Vaccines, petrochemicals demand and a much more complex world 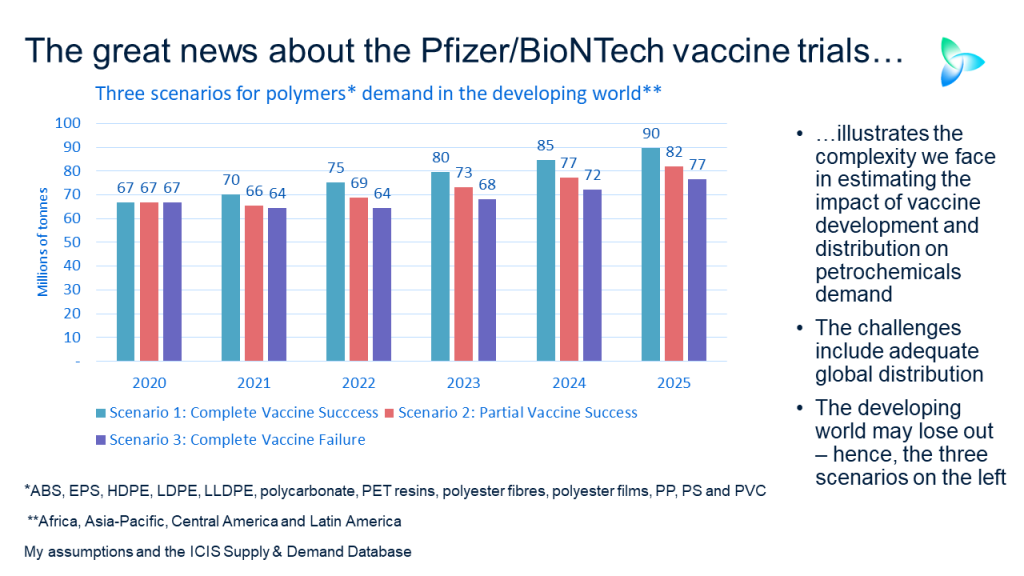 WE DIDN’T used to require expert knowledge of vaccines, epidemiology, political science and the impact of social media on human behaviour if we wanted to forecast petrochemicals demand, to name but a few of the many new disciplines that have now become essential.

All we had to do was take IMF or World Bank estimates of GDP and assume multiples of growth over those GDP numbers. The successful rule of thumb was that multiples would first rise as economies became wealthier and then decline once middle-income status had been achieved.

Sure, the forecasts, as with all forecasts, would very often be wrong. But this didn’t matter as overestimates of growth were not particularly costly to companies because recessions were short-lived, with rapid rebounds from the recessions more than making up for lost ground. And for those who underestimated growth, this was a positive boon. It is always better to under-promise and over-deliver to bosses and shareholders rather than the opposite ways around.

But everything has changed. I am going to use phrases that annoy some people, although I have yet to hear better terms to describe the fundamental and permanent changes in markets that have taken place over the last five years: we have moved from the Old Normal to the New Normal for demographic, geopolitical, sustainability and pandemic reasons.

The right kind of new demand analysis will constantly evolve. The relative influence of these four new drivers will never stop changing, requiring us to frequently rebuild the statistical models that produce our numbers. The models must be devised through talking to as many people as possible and vast amounts of reading and thinking. No automated short cuts are possible.

One set of forecast numbers will be wholly inadequate. In the old days, it was just about possible to get away with only one set of forecasts because accuracy variances were never that great. Not now. A wide range of scenarios has become essential.

To make my point, during the rest of this post I am going to look at just one detail of geopolitics and the pandemic that has major implications for petrochemicals demand: the search for a vaccine, as this has become extremely topical over the last couple of days.

The vaccine debate as an example

For the benefit of those who have visited Mars over the last couple days, Pfizer/BioNTech say their vaccine is 90% effective in protecting people from transmission of the virus in global trials.

I’ve been arguing since August that it is unlikely we will get a vaccine that’s very effective and is globally distributed within the next 12 months. I’ve even suggested we may never get such a vaccine. I very much hope that I am about to be proved wrong.

But whilst yesterday’s news is great, we are far from being out of the woods. Take the article published by The Lancet, a medical journal, just five days before the Pfizer/BioNTech vaccine announcement.

The journal wrote:  Vaccine delivery will probably scale up only gradually as manufacturing capabilities develop over 12–24 months post licensure of a COVID-19 vaccine. As such, the impact of vaccination on the transmission of SARS-CoV-2 will start slowly and build up over a few years to reach target coverage levels.

The article added that data on other coronaviruses suggested that immunity provided by a vaccine might only last for 12-18 months, resulting in the need for repeated doses.

The scientific journal, Nature, wrote in an article published yesterday, after the Pfizer/BioNTech announcement, that the vaccine may not finally turn out be as effective as 90%, although its effectiveness would likely remain above 50%.

Details had yet to be released about the nature of infections the vaccine protected against and whether the vaccine would prevent people with no or mild symptoms from spreading the disease, added Nature. Also unclear was whether the vaccine worked in the demographic cohort needing the most protection – the elderly, the magazine continued.

But because Pfizer/BioNTech had reported such excellent results, this raised the chance that other vaccine candidates would achieve similar successes, said Nature.

What about the anti-vaccine lobby? Will enough people be prepared to receive vaccines so that we achieve herd immunity?

Will the excitement about vaccine success lead to less social distancing and wearing face masks etc., making it harder to contain the disease?

Pfizer said they expect to supply up to 50m vaccine doses globally in 2020 and up to 1.3bn doses in 2021. Will this bring forward the estimate, made by an Indian pharmaceutical executive in September, that complete global distribution of any successful vaccine would not be achieved before the end of 2024?

This brings me to a subject close to my heart, the developing world. Will any successful vaccine or vaccines be delivered to every village in Africa and India? The distribution and cost challenges are huge. I worry that we could end up with a bifurcated world of Western countries with successful vaccine programmes and developing countries that are left behind.

Geopolitical tensions would build of we ended up with a split between immunised and non-immunised countries. Travel bans between say some parts of Africa and Europe could remain in place. The number of refugees trying to get into the rich world would surely increase.

As Western economies recover, the developing world could be left behind. It is no exaggeration to say that the developing world is already facing several lost decades of growth because the pandemic has caused increases in extreme poverty, a drop in remittances and strains on education and healthcare systems.

Another layer of complexity may involve China stepping into the vaccine-funding breach. Four Chinese vaccines are in Phase 3 trials and China is promising preferential access to vaccines for countries in Asia, Africa and Latin America. Might the US also help out? One could argue that the Biden/Harris administration will be keener on foreign aid than the outgoing Trump/Pence administration.

To be frank, I don’t really care who steps up to the plate! As long as we can fix the crisis in the developing world, it doesn’t matter who does the fixing. But if say China were to take the lead rather than the US this may have important geopolitical implications. China could increase its influence over the developing world, thereby improving its chances of winning a new cold war with the US.

What this may mean for polymers demand

None of this is meant to detract from the great Pfizer/BioNTech news. All the hardworking and brilliant people involved in this breakthrough deserve high praise. This is a great example of the capacity of humans to innovate during extreme crises. The announcement gives us real cause for hope.

What I am instead trying to hammer home, with a very large hammer, is the need for much more rigorous analysis of demand than we have been accustomed to. You cannot skimp on investments in teams that study the interplay between the four aspects of the New Normal – demographics, geopolitics, sustainability and the pandemic.

To further hammer in the nail, let us look at polymers demand in the developing world ex-China and how it could vary based on different success rates for a vaccine or vaccines. My estimates illustrate the extreme variations in potential demand outcomes that we confront under the New Normal.

Also note each of the three scenarios starts with the same level demand in 2020. This year’s demand, at around 67m tonnes, is forecast to be 8% smaller than in 2019.

These are my three scenarios:

We must also think about the global implications. If Scenario 3 happened, global demand growth between 2020 and 2025 would be at 54m tonnes, 15% lower than under Scenario 1.

A great deal of hard work lies ahead as we develop new demand models. But imagine if you end up with superior demand modelling expertise. Think of the commercial upsides.

As always, for more help in navigating this much more complex world, contact me at john.richardson@icis.com.