Retreat of globalisation and implications for petrochemicals 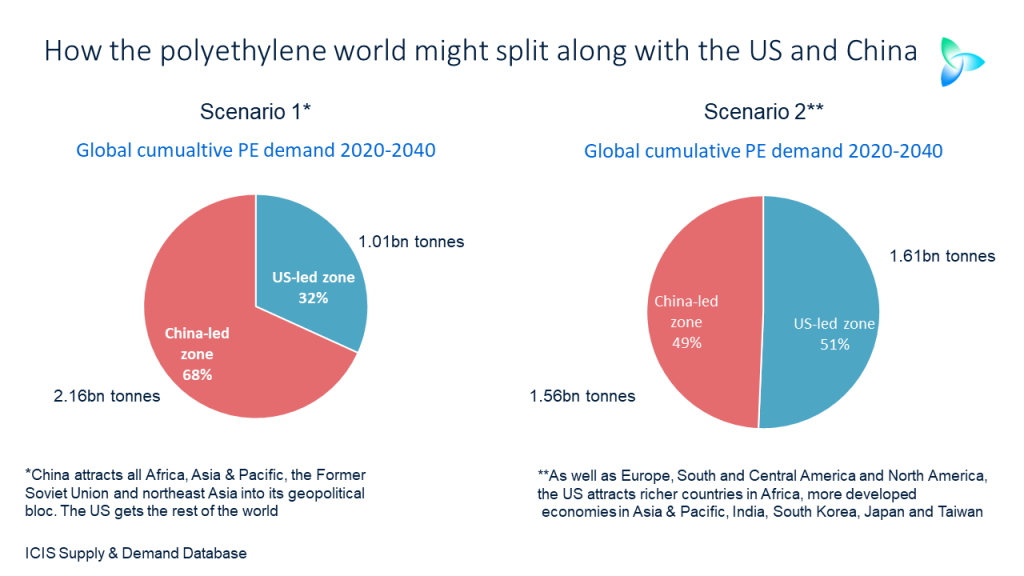 EVER SINCE the Berlin Wall fell in 1989, and the last great geopolitical struggle came to an end, the petrochemicals business has benefited from a highly globalised world. Product has flowed, almost seamlessly, from one country to another in ever greater volumes.

Sure, it has never been the case of feedstock advantage and logistics entirely determining export and import flows and investment decisions. The political, cultural and social context in which the industry operates has also always played a major role.

The most important example here is how China has reached or is close to self-sufficiency in a wide range of products, even though, on a cost-per-tonne basis, it is sometimes a laggard. China has built plants that have poor economics for job creation and wider economic development reasons.

But still, producers with cost advantages located in any country have held many of the aces in the pack since the end of the last cold war. Think of the enormous gains in overseas markets made by Middle East producers over the last 30 years. And think more recently of the strong profits of US producers in export markets, thanks to their shale gas advantage.

Now, though, we have reached a new tipping point. I believe that very soon, if it hasn’t happened already, feedstock advantage will be overshadowed by the new great power game, which is of course between the US and China.

In terms of the broader implications for the global economy, parallels are often drawn with the pre-1989 struggle between the US and the Former Soviet Union. But I feel a more accurate historical comparison is with the late 19th century/early 20th century clash between the UK and Germany. But in many aspects, we are entering uncharted territory as history never exactly repeats itself.

Consensus opinion has caught up

Readers of the blog will already be aware of all the above as I have been making these arguments for the past four years. Boards of directors which have been paying attention have had plenty of time to adjust their tactics and strategies.

But I worry that some companies have yet to get with the programme, despite consensus opinion that is now aligned with the arguments I’ve been making during the past four years. Time is running out for these companies. They must act quickly. The way we look at the feasibility of new investments should factor in scenarios of new trade barriers and very different patterns of economic growth.

One of the pivotal moments over the past four years was a speech made by US Vice President Mike Pence back in September 2018, as I wrote in an October 2018 blog post. The speech was also highlighted by Gideon Rachman from the Financial Times last week. Gideon, and the rest of the FT team, have for several years led the way in highlighting the US-China risks. The article quoted the following extracts from the Pence speech:

“China wants nothing less than to push the United States of America from the Western Pacific… But they will fail. We will not be intimidated, and we will not stand down.”

Wow. If Joe Biden were to win the presidential election next month, the tone of the rhetoric and some of the substance of the approach to China might change. But there is a consensus amongst Democrats and Republicans that China needs to be contained.

Daniel Yergin, the great oil industry historian (his book, The Prize, is essential reading) made this point when he said in the Gideon Rachman article: “While Democrats and Republicans hardly agree on anything today in Washington, one thing they do agree on is that China is a global competitor and that the two countries are in a technology race”.

So many different scenarios are possible

If Biden were to win, then perhaps there would be less emphasis on tariffs and more focus on working with international allies to contain China. Human rights may also become more of an issue. And whilst the Democrats could well continue the technology war begun by the Republicans, Biden seems more likely to engage with China on climate change.

This type of thinking helps us build potential outcomes for the US-China relationship from either a Trump or a Biden win. What follows are just some suggestions of outcomes from the results of next month’s elections. This is only a small fraction of the tip of the iceberg of today’s complexities:

Another issue, regardless of whether Trump or Biden wins, is the information-technology arms race. This James Kynge article, again from the FT, details how China is trying to win the race to set operating standards in 5G and artificial intelligence etc. This especially applies to the BRI which comprises most of the developing world.

It is easy to imagine the outcome: Facebook won’t talk to or connect with WeChat as WeChat becomes the preferred social media platform for many low-income developing countries. This entrenches the diversification of manufacturing supply chains as the world becomes completely bipolar, comprising a US-led economic and geopolitical zone and a China-led zone.

Countries will have to make choices about which side to pick, with choices made resulting in major implications for economic growth. Think of my adopted home country, Australia. Our Prime Minister, Scott Morrison, is leading calls for an international public enquiry into why and how the pandemic developed in China and spread to the rest of the world. This is a sign that Australia might be leaning towards the US.

If Australia picks the US, it will continue to benefit from the US security umbrella. Meanwhile, though, Australia could soon face tariffs on exports of wine to China. Australian exports of coal, iron ore and natural gas exports to China might also be at risk. The Australian economy is built on immigration that has turned negative because of the pandemic and resource exports, the majority of which go to China.

We have no idea how the world might split. Nobody knows which countries will side with the US and which with China. Decisions might not be static as countries move between the two blocs. Some countries may opt to “sit on the fence” as they attempt to keep both sides happy.

Many scenarios can thus be drawn up for how petrochemicals demand might divide. In the above chart, I present just two scenarios, focusing, as usual, on polyethylene (PE):

You could fill a whole slide deck with different outcomes and that is just for PE. We must also consider the impact on all the other petrochemicals and polymers.

But whilst, as I said, the range of outcomes is wide with no guarantees on who will win the new global geopolitical game (or might it  end up as a dead heat?), what is crystal clear to me is that the old ways of devising investments strategies no longer work.

PREVIOUS POST China's short and long-term domestic consumption challenges will be difficult to resolve
NEXT POST Plastic rubbish: the pandemic is increasing rather than reducing the pressure for change