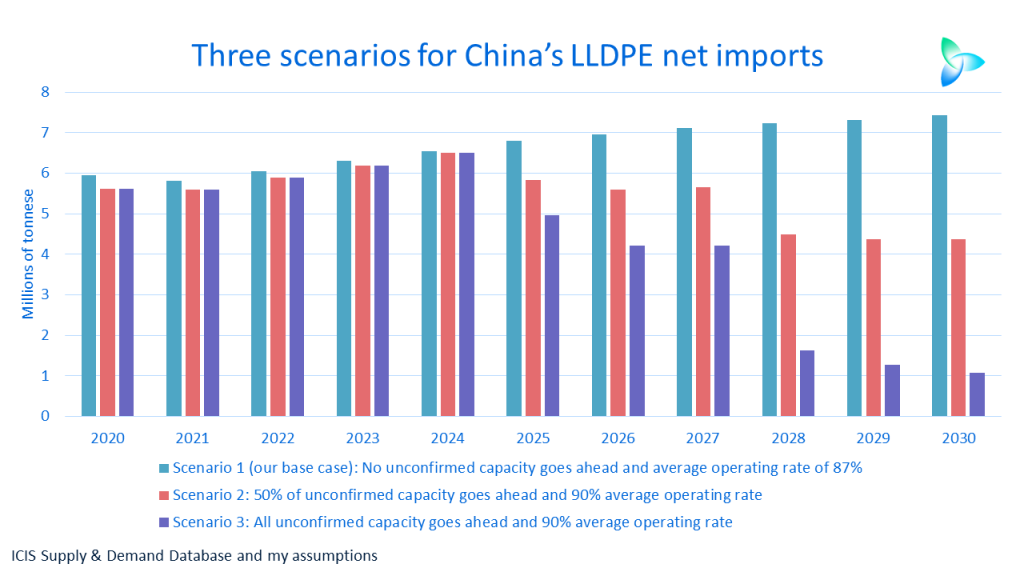 WE NEED to talk about politics without being political – a very difficult task, but an essential one if we are to be dispassionate as humanly possible in our analysis, and thus produce worthwhile analysis. If we are not dispassionate, we end up shouting at each other; and when anyone shouts, nobody listens, and nothing is achieved.

This is the same as it has always been. Politics has always been very emotive as it is tied up with our individual and group identities. But what makes this challenge even harder today is the extreme bipartisan nature of politics, not just in the US but in other countries as well.

But we cannot shy away from considering politics, or more specifically geopolitics, because they matter much more than they did just a few years ago. Without constant dispassionate analysis of the state of geopolitical play, you will not get the answers you require to properly plan your petrochemicals business.

What has changed is the split between the US and China. This has ended a benign period in world history that began in 1989 with the collapse of the Berlin Wall and ended around five years ago, when the US and China divisions first emerged.

During the benign period, analysing petrochemicals was easy because globalisation was on the rise.  People could restrict themselves to analysing degrees of petrochemical feedstock advantage, logistics efficiencies, the relative costs of building plants in different regions, the efficiencies of different technologies and so on and be pretty much on the money.

The difficult truth we need to recognise is that, because of the new geopolitical environment, you as a producer, might be a leader in all the above conventional measures of success, but still lose out as your plant is in the wrong location.

It is not just the change in the geopolitical environment that we need to consider. We must also evaluate the complex and constantly changing interplay between geopolitics and the three other new megatrends if we are to produce worthwhile analysis – demographics, sustainability and the pandemic.

Here I will stick with geopolitics as I take on the unenviable task of analysing the implications of the US presidential election results. I have many times thought about avoiding the job because of all the heightened emotions. But this would be the wrong thing to do for the blog’s readers.

What therefore follows is an attempt to dispassionately consider the implications for our industry of a Joe Biden and Kamala Harris victory and how it may or may not change the US-China relationship.

Even my assertion that Joe Biden and Kamala Harris have won the election will be seen by some in the US as a political statement. The outcome of the election is still being contested.

Assuming as I do that Biden and Harris do take office on 20 January, we do not know how smooth the transition of power will be. We don’t know who will end up controlling Congress as the Senate remains up for grabs. Run-off elections for the two Senate seats in Georgia won’t take place until January. And when Biden and Harris do take office, nobody knows whether they will be there for four or eight years.

From a Chinese perspective, therefore, there might well be a lot of confusion about what the US approach will be to their country over the next four or eight years.

Yes, US presidents have a lot autonomy in foreign policy. But Beijing will be considering the extent to which Biden will be able to focus on foreign policy, given the big potential for lack of political authority and political discord at home.

The president-elect’s campaign rhetoric did, however, offer some clarity. It appears as if Biden could be as tough towards China as Trump, even though Biden’s tone might be less confrontational.

If Biden were to be successful in his stated aims of building stronger bilateral agreements on dealing with China, China could end up facing an even tougher international environment than during the Trump era.

There has been discussion of the US re-joining the Trans-Pacific Partnership (TPP) trade deal which President Trump withdrew from during his first days in office. The US objective of being in the TPP was as a hedge against China through pulling countries such as Indonesia and Vietnam closer to the US. Note here, though, that re-joining the TPP would require Congressional approval.

President Trump’s supporters argue that his unilateral approach to China has been highly effective. But there is a risk, from a Chinese perspective, that Biden makes more headway in containing China through better relationships with allies.

Where a Biden presidency could more align with China is on climate change, as the president-elect has pledged to re-join the Paris accord. But if the US were to travel further down the green route, might this pose a greater challenge to China in the international arena? During the Trump White House, China was able to take a global lead on climate change.

What might be a change for the good, from the Chinese perspective again, is that President Biden might be less inclined to use tariffs in dealing with China. It seems as if the risks of the trade war resuming have receded.

But what if Biden makes no headway bilaterally in dealing with the thorny issue of Chinese state subsidies for manufacturing and allegations of intellectual property rights abuses? Might tariffs be back on the table, likely through World Trade Organisation mechanisms?

The Chinese relationship with the US remains just as ambiguous, uncertain and fraught with risks as it was before the election – if not even more so.

Meanwhile, what remain unchanged are the domestic challenges China sought to address in its October Fifth Plenum, when it outlined its economic policy framework for the next 15 years.

China lacks access to some of the technologies – most notably higher value semiconductors – it needs to raise the value of its manufacturing enough for it to escape a very deep middle-income trap. What has made access to these technologies harder over the last few years is its split with the US.

China has made good progress in tackling air pollution, but still faces a serious air pollution problem along with chronic soil and water pollution – legacies of its basic manufacturing-led economic growth during the last 30 years.

The country also faces a rapidly ageing population and a wide rural and urban income gap. Rural areas have been economically left behind as urban China has powered ahead, especially the rich coastal cities and towns.

The US election result was hardly going to change China’s geography. As I first highlighted in early 2017, Tim Marshall’s excellent book, Prisoners of Geography, is highly instructive here.

The chapter on China argued that the “nine-dash line”, which in 2013 became 10 dashes with the inclusion of Taiwan, involved China’s territorial claims over 200 tiny islands and reefs in the South China Sea. Over the last few years China had built 11 new islands in this region through reclaiming land from the sea. These islands had been militarised, wrote Marshall. This was a maritime passageway that provided access to the world’s most important shipping lanes.

In peacetime, access to these routes was not an issue as they were open to every country. But any nation had to plan for war, and, in times of war, these routes could be blockaded – unless, of course, they were under Chinese control, contended the author.

In contrast, the US had access to fantastic trading lanes. In the event of a war, it would be impossible to blockade America, wrote Marshall. Good maritime access had enabled the US to project its military and thus economic power during peacetime through its global naval defence umbrella.

Let me again stress my neutrality here by pointing out that empathy is not the same as sympathy. I have not, and will not, express a view in favour of either the US or China. But it is critical that we show empathy, that we understand China’s position, even if we don’t agree with China. This is the root of good, dispassionate geopolitical analysis.

To this end, it seems crystal clear to me that China will do nothing different under the Biden administration compared with the Trump administration. As Beijing outlined during the Fifth Plenum, China’s focus during the next 15 years will be on:

I turned the question around to point out that this type of thinking was the Old Normal, when China was building coal-to-olefins (CTO) plants in remote rural areas that had high capital costs. These plants only just about worked on a feedstock cost basis if crude was around $80/bbl. It also had lots of sub world-scale plants that it was not prepared to shut down for job preservation reasons – small polymer plants, for instance.

What changed everything was the government decision in 2015 to switch from coal-based to refinery-based feedstocks as the main route to petrochemicals self-sufficiency. This was done for environmental reasons because the CTO process is highly polluting; it was also done for feedstock cost reasons as the price of oil had collapsed.

Five years ago, Beijing also decided to shut down lots of small petrochemicals and chemicals plants that, because of increased urbanisation, had found themselves next to new population centres. The plants were also uneconomic and, again, bad for the environment.

Bang. Here we are today. In the same way that European government subsidies got renewable energy off the ground to the point where it is now more cost efficient than natural gas, oil and coal, the Chinese government has created world-leading state-of-the-art petrochemicals capacity.

China’s new plants have excellent integration with refineries, are world-scale, have strong technologies, great logistics and are in petrochemicals industry parks with shared, and so low cost, logistics.

China’s new capacity therefore ticks the box of adding value to the country’s manufacturing capacity. And for supply security reasons in a very uncertain geopolitical world, it makes so much sense for China to build many more modern petrochemicals plants – and run them at high operating rates once they are on-stream.

This leads me on to the chart at the beginning of this blog post where I present three scenarios for China’s linear low-density polyethylene (LLDPE) net imports in 2020-2030.

Just look at the difference. Under Scenario 1, net imports are 7m tonnes in 2030. Scenario 2 sees 2030 net imports at 4m tonnes with net imports in Scenario 3 at only 1m tonnes. In my opinion, something close to Scenario 3 is the most likely outcome.

And I believe you can guarantee something else: any imports of LLDPE, or of any other petrochemical or polymer for that matter, will only come from China’s partner countries, the countries with which it has close geopolitical and economic relationships. This could lead the US out in the cold. This is why, as I said, at the beginning, geopolitics are one of the new four megatrends driving our industry.

PREVIOUS POST China petrochemicals rebound provides major global demand boost
NEXT POST Why history, culture and politics will give you the petrochemicals answers you need